Bernie Sanders has won the popular vote in both the New Hampshire and Iowa presidential primary contests in considerable part by presenting himself as an opponent of war. Following the criminal assassination of Iranian General Qassem Suleimani last month, Sanders was the most vocal of the Democratic presidential aspirants in criticizing Trump’s action. His poll numbers have risen in tandem with his stepped-up anti-war rhetoric.

He has repeatedly stressed his vote against the 2003 invasion of Iraq, reminding voters in the Iowa presidential debate last month, “I not only voted against that war, I helped lead the effort against that war.” 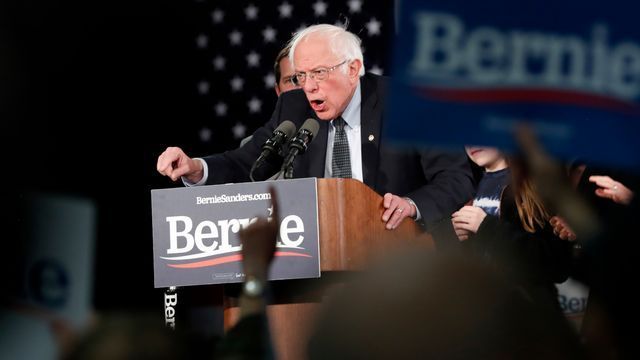 However, when speaking to the foremost newspaper of the American ruling class, the New York Times, the Sanders campaign adopts a very different tone than that employed by the candidate when addressing the public in campaign stump speeches or TV interviews.

The answers provided by Sanders’ campaign to a foreign policy survey of the Democratic presidential candidates published this month by the Times provide a very different picture of the attitude of the self-styled “democratic socialist” to American imperialism and war. In the course of the survey, the Sanders campaign is at pains to reassure the military/intelligence establishment and the financial elite of the senator’s loyalty to US imperialism and his readiness to deploy its military machine.

Perhaps most significant and chilling is the response to the third question in the Times’ survey.

Question: Would you consider military force to pre-empt an Iranian or North Korean nuclear or missile test?

A Sanders White House, according to his campaign, would be open to launching a military strike against Iran or nuclear-armed North Korea to prevent (not respond to) not even a threatened missile or nuclear strike against the United States, but a mere weapons test. This is a breathtakingly reckless position no less incendiary than those advanced by the Trump administration.

Sanders would risk a war that could easily involve the major powers and lead to a nuclear Armageddon in order to block a weapons test by countries that have been subjected to devastating US sanctions and diplomatic, economic and military provocations for decades.

Moreover, as Sanders’ response to the Times makes clear, the so-called progressive, anti-war candidate fully subscribes to the doctrine of “preemptive war” declared to be official US policy in 2002 by the administration of George W. Bush. An illegal assertion of aggressive war as an instrument of foreign policy, this doctrine violates the principles laid down at the Nuremberg Trials of Nazi officials after World War II, the United Nations charter and other international laws and conventions on war. Sanders’ embrace of the doctrine, following in the footsteps of the Obama administration, shows that his opposition to the Iraq war was purely a question of tactics, not a principled opposition to imperialist war.

The above question is preceded by another that evokes a response fully in line with the war policies of the Obama administration, the first two-term administration in US history to preside over uninterrupted war.

Question: Would you consider military force for a humanitarian intervention?

Among the criminal wars carried out by the United States in the name of defending “human rights” are the war in Bosnia and the bombing of Serbia in the 1990s, the 2011 air war against Libya that ended with the lynching of deposed ruler Muammar Gaddafi, and the civil war in Syria that was fomented by Washington and conducted by its Al Qaeda-linked proxy militias.

The fraudulent humanitarian pretexts for US aggression were no more legitimate than the lie of “weapons of mass destruction” used in the neo-colonial invasion of Iraq. The result of these war crimes has been the destruction of entire societies, the death of millions and dislocation of tens of millions more, along with the transformation of the Middle East into a cauldron of great power intervention and intrigue that threatens to erupt into a new world war.

Sanders fully subscribes to this doctrine of “humanitarian war” that has been particularly associated with Democratic administrations.

In response to a question from the Times on the assassination of Suleimani, the Sanders campaign calls Trump’s action illegal, but refuses to take a principled stand against targeted assassinations in general and associates itself with the attacks on Suleimani as a terrorist.

Clearly there is evidence that Suleimani was involved in acts of terror. He also supported attacks on US troops in Iraq. But the right question isn’t ‘was this a bad guy,’ but rather ‘does assassinating him make Americans safer?’ The answer is clearly no.

In other words, the extra-judicial killing of people by the US government is justified if it makes Americans “safer.” This is a tacit endorsement of the policy of drone assassinations that was vastly expanded under the Obama administration—a policy that included the murder of US citizens.

At another point, the Times asks:

Would you agree to begin withdrawing American troops from the Korean peninsula?

No, not immediately. We would work closely with our South Korean partners to move toward peace on the Korean peninsula, which is the only way we will ultimately deal with the North Korean nuclear issue.

Sanders thus supports the continued presence of tens of thousands of US troops on the Korean peninsula, just as he supports the deployment of US forces more generally to assert the global interests of the American ruling class.

On Israel, Sanders calls for a continuation of the current level of US military and civilian aid and opposes the immediate return of the US embassy from Jerusalem to Tel Aviv.

On Russia, he entirely supports the Democratic Party’s McCarthyite anti-Russia campaign and lines up behind the right-wing basis of the Democrats’ failed impeachment drive against Trump:

Question: If Russia continues on its current course in Ukraine and other former Soviet states, should the United States regard it as an adversary, or even an enemy?

Question: Should Russia be required to return Crimea to Ukraine before it is allowed back into the G-7?

Finally, the Times asks the Sanders campaign its position on the National Security Strategy announced by the Trump administration at the beginning of 2018. The new doctrine declares that the focus of American foreign and military strategy has shifted from the “war on terror” to the preparation for war against its major rivals, naming in particular Russia and China.

In the following exchange, Sanders tacitly accepts the great power conflict framework of the National Security Strategy, attacking Trump from the right for failing to aggressively prosecute the conflict with Russia and China:

Question: President Trump’s national security strategy calls for shifting the focus of American foreign policy away from the Middle East and Afghanistan, and back to what it refers to as the ‘revisionist’ superpowers, Russia and China. Do you agree? Why or why not?

Answer: Despite its stated strategy, the Trump administration has never followed a coherent national security strategy. In fact, Trump has escalated tensions in the Middle East and put us on the brink of war with Iran, refused to hold Russia accountable for its interference in our elections and human rights abuses, has done nothing to address our unfair trade agreement with China that only benefits wealthy corporations, and has ignored China’s mass internment of Uighurs and its brutal repression of protesters in Hong Kong. Clearly, Trump is not a president we should be taking notes from. [Emphasis added].

In a recent interview Ro Khanna, a Democratic congressman and national co-chair of the Sanders campaign, assured Atlantic writer Uri Friedman that Sanders would continue provocative “freedom of the seas” navigation operations in the Persian Gulf and the South China Sea, while committing a Sanders administration to “maintain some [troop] presence” on the multitude of bases dotting “allied” countries from Japan to Germany.

Millions of workers, students and young people are presently attracted to Sanders because they have come to despise and oppose the vast social inequality, brutality and militarism of American society and correctly associate these evils with capitalism. However, they will soon learn through bitter experience that Sanders’s opposition to the “billionaire class” is no more real than his supposed opposition to war. His foreign policy is imperialist through and through, in line with the aggressive and militaristic policy of the Democratic Party and the Obama administration.

The Democrats’ differences with Trump on foreign policy, though bitter, are tactical. Both parties share the strategic orientation of asserting US global hegemony above all through force of arms.

No matter how much Sanders blusters about inequality, it is impossible to oppose the depredations of the ruling class at home while supporting its plunder and oppression abroad.