Strengthened by the failure of the Democrats’ impeachment drive, President Donald Trump has accelerated his efforts to expand the powers of the presidency in every sphere.

On Thursday, the Senate approved a symbolic bill instructing the White House to “terminate the use of United States Armed Forces for hostilities against the Islamic Republic of Iran … unless explicitly authorized by a declaration of war or specific authorization for use of military force against Iran.”

The bill is virtually certain to be passed by the Democratic-controlled House of Representatives, which passed its own version of the measure last month. 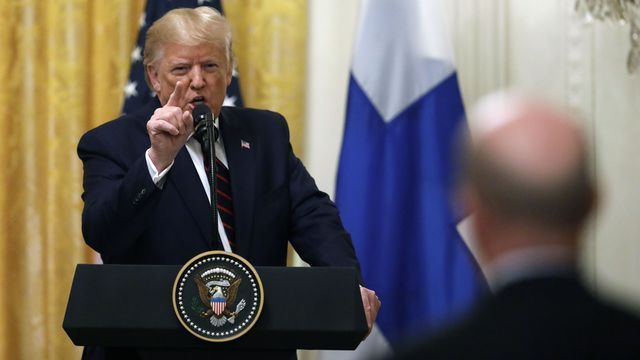 In response, the White House stated categorically that Trump will veto the bill that emerges from Congress, arguing in effect for unlimited and unilateral presidential powers to wage war.

The White House said the bill “should be rejected because it attempts to hinder the President’s ability to protect United States diplomats, forces, allies, and partners, including Israel, from the continued threat posed by Iran and its proxies.”

The statement adds, “Protecting the national security of the United States could foreseeably require the President to respond to Iranian threats beyond direct attacks on the United States.”

The response marks a continuation of the drive by Trump to expand the powers of the presidency beyond all constitutional restraints.

Neither Trump’s murder last month of Iranian General Qassem Suleimani—an act of war against Iran—nor his misappropriation of money for the border wall played any role in the Democrats’ impeachment, which centered on their claim that Trump betrayed US national security by delaying military aid to Ukraine in what they called a “hot war” with Russia.

During the Senate impeachment trial, which ended last week in Trump’s acquittal, the White House based its legal defense on an assertion of presidential powers beyond any significant congressional oversight or restraint. Trump’s lawyers argued that “abuse of power” and “obstruction of Congress” were not impeachable offenses, and that the White House would in principle be justified in taking any action provided the president believed it was in the national interest.

Harvard law Professor Alan Dershowitz argued on the Senate floor that “if a president does something which he believes will help him get elected in the public interest, that cannot be the kind of quid pro quo that results in impeachment.”

Jonathan Turley, the scholar who testified for Trump during the House impeachment inquiry, said of the White House defense in the Senate trial, “The president’s defense was then tied inextricably to this extreme and chilling argument.”

The war powers resolution on Iran, which passed the Senate when eight Republicans joined the Democrats to vote for it, is toothless. It includes a loophole rendering meaningless the requirement for congressional authorization for military action against Iran. “Nothing in this section shall be construed to prevent the United States from defending itself from imminent attack,” it states.

As the Wall Street Journal noted, this passage is an “escape clause” because “Any President would define the defense of the U.S. to include a potential attack on American forces, diplomats, or other interests abroad.”

There is no doubt that a presidential veto will defeat the measure, since its supporters lack the two-thirds majority required to overturn a White House veto.

In an equally naked power grab, the Pentagon announced Thursday afternoon that it will divert $3.8 billion in appropriated funds to build the wall along the US border with Mexico. This is being done under the provisions of a national emergency Trump declared in February of 2019 to circumvent Congress’s refusal to allocate the money he demanded for construction of the wall.

Trump’s misappropriation of funds in defiance of Congress, for the second year in a row, is an egregious violation of constitutional limits on the presidency, which include giving Congress, not the executive branch, the authority to appropriate funds—the so-called “power of the purse.”

A measure of the spinelessness of the Democrats is their role in supplying the votes required in subsequent legislation to “back fill” to the Pentagon budget the money diverted from other military projects to build the border wall. This has gone hand in hand with their failure to take any action to hold Trump to account for his violations of the Constitution.

Over the past week, Trump has carried out a purge of the National Security Council (NSC), firing more than 70 people, including Lt. Col. Alexander Vindman, who testified in the House impeachment hearings. After having Vindman marched out of the White House by security guards, Trump implied in a tweet that the military should discipline the former head of the Ukraine desk at the NSC.

Trump has also moved to shield his associate Roger Stone, demanding a lighter sentence for him than that proposed by the US attorneys who prosecuted him and secured his conviction for lying to the FBI and Congress and witness tampering. Following the resignation of the US attorneys, Attorney General William Barr, who approved the lessening of the sentence to be imposed on Stone, criticized Trump, saying his public statements made it “impossible to do my job.”

Also on Thursday, Judy Shelton, Trump’s nominee to the Federal Reserve Board, testified before Congress at a confirmation hearing. Shelton had previously advocated an eclectic mix of unorthodox economic ideas, but her testimony focused on defending the president’s right to influence monetary policy as well as the Trump administration’s efforts to promote the competitive devaluation of the US dollar and trade war.

Trump’s moves to expand the powers of the presidency in the wake of the impeachment debacle make clear that that the Trump administration and its drive toward dictatorship cannot be opposed through the Democratic Party.

From the outset of Trump’s tenure, the Democrats have focused their opposition to Trump on differences over foreign policy and worked to suppress and divert the broad and intense popular opposition to the fascistic billionaire president. At the same time, they have collaborated with his crackdown on immigrants, his tax handouts to rich, his slashing of regulations on corporations and his cuts in social programs.

Trump embodies the dictatorial, criminal and oligarchic character of American capitalism. The struggle against his administration is inseparable from the fight against the capitalist system as a whole and can be carried out only under the leadership of the working class, rallying behind it all progressive sections of society in a struggle for socialism.