The White House confirmed Friday it is deploying militarized border patrol agents from a unit known as BORTAC to carry out immigration round-ups in cities where local governments have ordered local police not to fully comply with federal immigration agents’ deportation raids.

These forces will carry out operations in Atlanta, Boston, Chicago, Detroit, Houston, Los Angeles, New Orleans, New York, San Francisco and Newark, New Jersey. All these cities are under Democratic administrations that have either declared themselves “sanctuary cities” or otherwise resisted cooperation with Trump’s immigration policies. 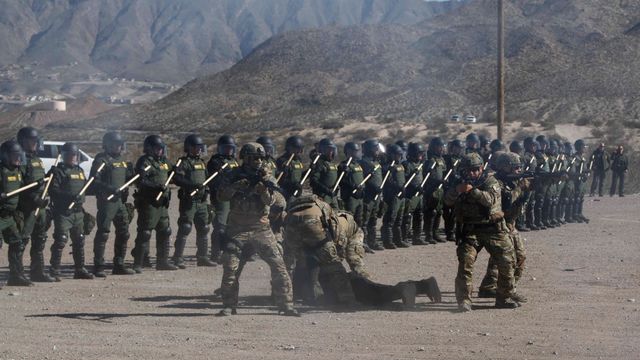 Members of a Customs and Border Protection tactical unit, dressed in camouflage drag away a fellow agent pretending to be an injured protester during a training exercise on Friday, Jan. 31, 2020, in the nearby town of Sunland Park, New Mexico. The exercise was part of an annual use-of-force training for agents in the El Paso sector, which covers southern New Mexico and west Texas [Credit: AP Photo/Cedar Attanasio]

A spokesman for Immigration and Customs Enforcement (ICE) said the purpose of the new measures, which involve the deployment of 100 members of BORTAC for the next three months, was to increase arrests of immigrants by 35 percent in the 10 cities. An additional, unstated purpose is to spread terror through the sizeable immigrant communities in these cities.

The specialized border unit was described by the New York Times as follows: “With additional gear such as stun grenades and enhanced Special Forces-type training, including sniper certification, the officers typically conduct high-risk operations targeting individuals who are known to be violent, many of them with extensive criminal records.”

These hardened police thugs will be deployed to immigrant working class neighborhoods where ICE agents are concerned about popular resistance to their attempts to snatch and grab fathers, mothers or entire families.

In one such confrontation last summer in Nashville, neighbors gathered around an ICE van in which an immigrant father and son had been placed, and forced the agents to release them and drive away empty-handed. In the scenarios now envisioned by Trump and his fascist immigration attack dog, Stephen Miller, BORTAC officers would suppress such opposition by force, perhaps even deadly force.

According to the Boston Herald, a Border Patrol tactical team—the equivalent of a SWAT team in the police—was already in the city, working in support of ICE agents to arrest immigrants.

The ICE announcement came the day after the Pentagon officially reported to Congress that the White House would take $3.8 billion in funds appropriated by Congress for the military and use the money to build the wall along the US southern border.

This misappropriation of funds, which is a violation of both constitutional and civil law, has been met with silence on the part of the Democrats and the media. It did not make the evening news on either Thursday or Friday.

On Friday, Trump made a fascistic political appeal to Border Patrol agents assembled at an office building near the White House, whom he incited against the “left.” In response, the officers and agents chanted “four more years.”

Gloating over the procuring of funds for his border wall, Trump told the meeting: “We got it done, and I made your jobs a lot easier. Say thank you, Mr. President… I am with you like no president has ever been with you.”

In his speech, Trump alternated between denunciations of the “radical left” Democrats, who he claimed “want open borders,” and hailing the virtually unlimited sums of money the Democrats have given for his border Gestapo and his military build-up.

Within days of voting to impeach Trump last December, the Democratic-controlled House passed a budget including record funding for the military, with no prohibition against using the funds for Trump’s border crackdown. The House also passed the USMCA trade deal, which unifies the North American market as part of the trade war with China.

“I got everything from them,” Trump boasted. “We rebuilt our military. I was able to get much more money; almost two-and-a-half trillion dollars.”

Following his acquittal in the Senate trial, which centered on claims by the Democrats that he abused his powers by being insufficiently aggressive against Russia, Trump has intensified his efforts to dismantle all constitutional and legal restraints upon the presidency.

Earlier on Friday, Trump proclaimed his effectively unlimited authority to intervene in the prosecution of criminal cases. Noting the comments of Attorney General William Barr, whom Trump paraphrased as saying, “The President has never asked me to do anything in a criminal case,” Trump tweeted, “This doesn’t mean that I do not have, as President, the legal right to do so. I do, but I have so far chosen not to!”

Barr made statements critical of Trump after the president pressured the Justice Department to demand a lighter sentence for Roger Stone, his personal associate who was convicted of lying to Congress and witness tampering in the course of the Democrats’ investigation of “Russian collusion.”

Also on Friday, Barr assigned an outside prosecutor to review the criminal case against Trump’s former national security adviser Michael Flynn. The move was widely seen as another intervention by the White House in the operations of the Justice Department. In November 2017, Flynn pleaded guilty to lying to the FBI and agreed to cooperate with the investigation of Special Counsel Robert Mueller, which failed to find evidence of “collusion” with Russia but charged Trump associates with other crimes, many of them involving perjury.

Earlier this week, after the Senate passed a resolution under the War Powers Act barring Trump from attacking Iran without congressional authorization, the White House announced that Trump would veto the bill, effectively asserting unlimited presidential power to wage war.

On February 10, Trump issued a budget plan that included sweeping cuts to discretionary anti-poverty programs and other public spending, as well as Medicare, Medicaid and Social Security.

The Democrats’ impeachment drive sought to exclude all of Trump’s real crimes and the basis on which he is opposed by broad sections of the population. Neither Trump’s criminal crackdown on the border, nor his diversion of funds for the wall in defiance of Congress, nor his assertion of essentially unlimited powers to wage war played any role in the impeachment.

Rather, the Democrats sought and failed to remove Trump on the grounds that he is insufficiently aggressive against Russia, which they declared was engaged in a “hot war” against Ukraine, a US ally.

The collapse of this effort has only strengthened Trump in his efforts to transform the presidency into a personalist dictatorship unconstrained by the Constitution.