The eurozone economy is experiencing its worst downturn since the currency crisis of 2012, according to official data released last week, even before the impact of the coronavirus outbreak in China makes itself felt.

The figures shattered claims that the European economic outlook had started to improve, revealing that growth in the single currency area was just 0.1 percent in the fourth quarter of last year.

Germany, the eurozone’s leading economy, recorded no growth in the fourth quarter, coming in below the expectations of analysts, after growth of 0.2 percent in the third.

The chief driving force of the downturn is the fall in industrial production. Eurostat reported last week that output fell by 2.1 percent in December, bringing the total decline for the year to 4.1 percent. Factory production was down in Germany, France and Italy.

The data indicates that other areas of the economy are also turning down. There was a 1.6 percent fall in retail sales in the eurozone in December, the steepest decline in a decade.

Commentary on the latest figures by economic and financial analysts was universally gloomy.

Anatoli Annenkov, the senior economist at the French financial firm Société Générale, said: “The numbers so far have been just awful, not only industrial production but also retail sales.”

Nadia Gharbi, senior economist at Picet Wealth Management, said: “At the beginning of the year we saw surveys pointing to a recovery and the resilience of services in the eurozone. But the hard data we have seen recently has been pretty horrible.”

ING economist Carsten Brzeski described the industrial situation as a “horror show.” “Despite some tentative positive signs from soft data that point to a bottoming out of the manufacturing slump, the hard reality looks completely different.”

The situation is expected to worsen over the coming period as the economic effects of the coronavirus spread, with predictions that Germany, as well other economies, could slide into recession.

The head of forecasting at Ifo, the Munich-based research organisation, Timo Wollmerhäuser said: “Greater production losses in Chinese industry could appreciably intensify the effects of the coronavirus on the German economy.” Germany, he noted, could be more heavily affected than other countries in Europe because 9.4 percent of German intermediate goods, forming part of industrial supply chains, come from China.

Germany is also going to be hit on the demand side. Exports to China account for 7 percent of all German exports, comprising around 2.8 percent of national output.

Stefan Schneider, chief economist for Germany at Deutsche Bank, pointed out that weak Chinese demand was an important factor in the deceleration of exports in 2019. He predicted that the coronavirus outbreak could cut 0.2 percentage points from first quarter growth that would make a “technical recession”—defined as two quarters of negative growth—“quite probable.”

“The outbreak of the coronavirus provides a substantial risk for the expected global recovery, as hopes were pinned on an improvement of the Chinese economy,” he said.

Estimates for the impact of the coronavirus on the Chinese economy are steadily being escalated as large areas of the economy remain locked down. The Australian bank ANZ has forecast that growth in the first quarter of the year will fall to 3.2 percent, half the rate for the first three months of 2019, which showed the lowest annual growth rate in 30 years.

But even these significantly lower estimates are regarded as far too optimistic. “I can’t believe that it’s going to grow by even 2 percent,” Jörg Wuttke, head of the EU Chamber of Commerce in China, told the Financial Times. Other estimates are that the Chinese economy will flatline in the first quarter. 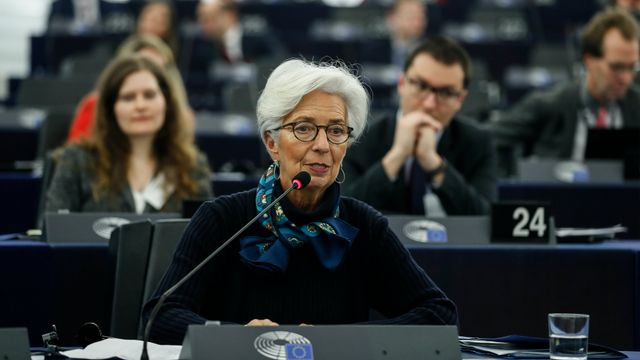 Even before the latest data came out, former International Monetary Fund chief and now president of the European Central Bank, Christine Lagarde, warned that the coronavirus outbreak had replaced the US-China trade war as the main risk to economic growth.

“Downside risks are multiple and when some of them phase out, new risks come up,” she said.

Even though the economic outlook is worsening, stock markets in Europe, like Wall Street, continue to surge.

On Friday, the Stoxx 600 index, covering the eurozone’s biggest companies hit a record high. Bond prices also rose, pushing interest rates even lower—with the yield on Greek 10-year bonds, once an anathema for financial investors, going to an all-time low of 1 percent.

As it is in the US, the reason for this divergence between financial markets and the real economy is the belief that more cheap money will be pumped into the financial system, fuelling the ongoing speculation.

The expectation is that the ECB will loosen its monetary policy still further at its next meeting in March by pushing its base interest rate deeper into negative territory and possibly increasing its purchases of financial assets from their present level of €20 billion a month to €40 billion.

There are warnings that the capacity of central banks to keep propping up the financial system and providing a stimulus is becoming ever more limited.

Earlier this month Lagarde said the already low interest rates, coupled with low inflation and low growth throughout the eurozone, had “significantly reduced the scope for the ECB and other central banks worldwide to ease monetary policy” if there were another crisis.

Across the Atlantic, the former chair of the US Federal Reserve, Janet Yellen, issued the same warning.

“I worry about low interest rates because they are a symptom of a deeper problem in the global economy,” she said. “And it has put central banks in a position where they don’t have a lot of ammunition. If we have a serious recession, we’re probably not going to be able to count on central banks to offer up a significant response.”