Following the opening of the Munich Security Conference, German President Frank-Walter Steinmeier and Foreign Minister Heiko Maas (both Social Democrats, SPD) delivered bellicose speeches in which they demanded a more independent and aggressive foreign policy for Germany and Europe. Defence Minister Annegret Kramp-Karrenbauer developed the same theme on Saturday. Her appearance had all the hallmarks of a wartime speech. In considerable detail, she explained what Berlin, Brussels and Paris intend to do to prepare for future conflicts between the major powers for the redivision of the world. 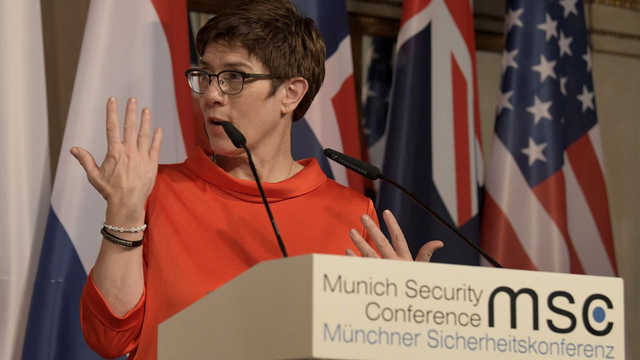 “Observing is inadequate,” stated Kramp-Karrenbauer at the beginning of her speech, which was titled “Defending the West.” She is “in full agreement” with French President Emmanuel Macron, who also spoke at the conference in favour of a more independent European foreign policy. The Europeans not only need to “describe their weaknesses, not just comment on or complain about the actions of others—but conduct more strategic dialogue in Europe” and “do something concrete for our security.” Germany in particular is “obliged to develop more practical capabilities and a willingness to act.”

The defence minister recalled “the conference here six years ago, when Germany’s ‘greater readiness to accept responsibility’ was discussed and the president at the time (Joachim Gauck) called on Germany to intervene ‘earlier, more decisively, and more substantially’ in international crisis management.” This remains “correct” and must now, in spite of all previous efforts (Kramp-Karrenbauer referred to German military operations in Eastern Europe, Mali, Iraq, and Afghanistan), be put into practice.” I believe it is necessary for the Munich consensus of words to become a Munich consensus of deeds,” she declared. “Because we Germans and Europeans observe a strategic situation that is increasingly being determined by competition between the major powers.”

Kramp-Karrenbauer then spoke concretely about what the ruling elite is plotting behind the backs of the population: a comprehensive remilitarisation programme for Germany aimed at enabling Berlin and Brussels to wage war to protect their economic and geostrategic interests against their rivals around the world.” We will increase the German army’s combat readiness with a “combat readiness initiative,’ which will lead to a significant improvement in equipment and combat power already this year,” she stated.

To this end, military spending will increase substantially.” We are keeping the promise we made to our NATO allies and will increase our defence spending year over year. By 2031, 10 percent of NATO’s total capabilities will be supplied by Germany. For this, we need a defence budget of 2 percent of gross domestic product,” declared Kramp-Karrenbauer. In absolute terms, this means a doubling of the defence budget to more than €90 billion annually.

Kramp-Karrenbauer was explicit about what the money would be used for. “Ladies and gentlemen, to increase Europe’s ability to take decisive action, Germany and France are developing the military platforms of the future—while always remaining open for alliances with others. For example, in the Future Combat Air System [FCAS] with Spain, where we have already taken the first steps. Just three days ago, we were able to get parliamentary approval for the money to fund these concrete steps.”

The price tag for the FCAS, which was already launched last June by Kramp-Karrenbauer’s predecessor, Ursula von der Leyen, and her counterparts from France and Spain, Florence Parly and Margarita Robles, is enormous. According to a report in Handelsblatt, the costs of FCAS could rise “above €500 billion by mid-century.” This would be enough to cover Germany’s total education budget for 27 years.

Even so, numerous additional multibillion rearmament projects are planned. “We are also advancing on the Main Ground Combat System—the tanks of the future, if you will,” continued Kramp-Karrenbauer. “So we Europeans are showing that we are serious about throwing our own weight around more, militarily, technologically, and on industrial policy.” She also appealed for a “common European approach” on the issues of “drones and air defence systems.” The cooperation should “go well beyond the military sphere” and comprise “the fields of artificial intelligence and quantum computing, for instance.”

The huge rearmament projects are part of Berlin’s determined drive to transform Europe into a military powerhouse under its leadership that is capable of waging war and carrying out military interventions independently of and, if necessary, against the United States. In Syria, Europe has “no standing and no initiative” and this “cannot be permitted” in other conflict zones, Kramp-Karrenbauer warned. “I therefore think it is important and have been strongly pushing for us in Germany and Europe to define our political goals with regard to the Sahel region,” she said.

The Sahel zone is “a key region for Europe, due to issues like immigration or the threat of terrorism. This is why it’s important for Germany to remain engaged there, including militarily. We are doing this through training missions, which help our African partners to defend themselves. We have to be more robust in these missions. And consider whether we can do more in the common interest.” It is clear that what is being considered is a broader military deployment aimed at occupying the resource-rich region.

Kramp-Karrenbauer also expressed a desire for “common action” with regard to “the Strait of Hormuz.” Germany is “not participating in the American mission, because we consider ‘maximum pressure’ not to be the correct way to deal with Iran.”

The ruling elite’s plans and rhetoric increasingly resemble the war fever which emerged prior to the First and Second World Wars.” We all belong together, we are all part of the West, which we want to strengthen in all directions,” Kramp-Karrenbauer stated in conclusion. “The best way to defend the West” is to “give its ideas space to spread freely.”

The last time leading German politicians blustered about “spaces” and how they want to strengthen their influence “in all directions,” the result was the Second World War and the worst crimes in human history. If the ruling elite thinks it can simply revive its war policy 75 years later, they are seriously mistaken. The working class will not allow German imperialism once again to thrust the world into the abyss.