At least 2.5 million children in Germany live in poverty

In Germany, one of the richest countries in the world, more than 1.5 million children live in families receiving welfare benefits. Although more people are working, this does not help families who are still struggling to get out of poverty. Within three years, the number of children affected fell only slightly from 1.56 million in 2016 to 1.51 million last year. These figures were published last week by the German Federation of Trade Unions (DGB) using data from the Federal Employment Agency.

For those deemed welfare-dependent, i.e., eligible to receive unemployment benefits or basic income support (“Hartz IV”), there are far-reaching restrictions. Starting from this year, parents in receipt of Hartz IV payments receive for their children under 6 years old €250, and for 6- to 13-year olds, €308. Except for rent, this must cover all their children’s monthly costs. For example, the Hartz IV rate for a 10-year-old child provides €4.09 per day for food and drink, €2.68 per month for books and €14.60 for shoes. Some €37.08 per month are supposed to cover “leisure, entertainment, culture.” This means visits to the swimming pool, cinema and football stadium, for example, are not possible in one month. 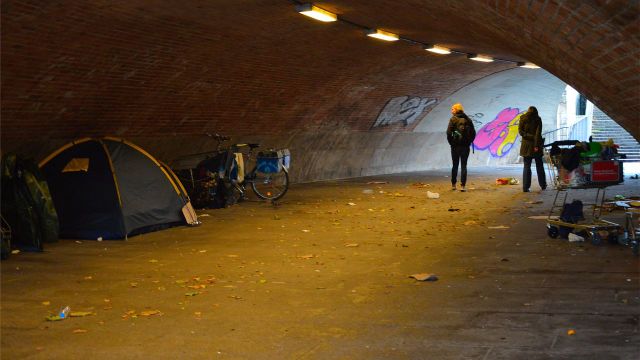 The ice cream parlour must also be reserved for special days. For the grand coalition government of the Christian Democrats (CDU/CSU) and Social Democrats (SPD), a scoop of ice cream is a luxury item to which children in welfare-dependent families are not entitled. When deriving the standard rates, this item has been removed from the consumption expenditures of low-income households. The same applies, for example, to a Christmas tree, Advent decorations and crayons.

Earlier this month in Bochum, the Workers’ Welfare Association (AWO) discussed a long-term study it had commissioned that takes an in-depth look at child poverty and its consequences. At least 2.5 million children in Germany live in poverty. Their families must get by on less than 60 percent of the average income and are therefore considered “at risk of poverty.” “It is a sad reality that one in five of the smallest and weakest members of our society live in poverty,” complained Michael Scheffler, AWO chairman in North Rhine-Westphalia (NRW), at the symposium in front of 300 people.

In his speech, Gerhard Bäcker, professor at the University of Duisburg-Essen, described how child poverty is concentrated in certain regions. The poverty rate in NRW had risen from 14.4 percent when the Hartz IV laws were introduced in 2005 to 18.1 percent most recently. According to Bäcker, the Ruhr area in particular has long been “the East in the West.” One in four or five inhabitants of the Ruhr area lives in poverty. Cities such as Duisburg (27.4 percent in poverty), Dortmund (23.9 percent) and Essen (21.6 percent) are severely affected, but Cologne (20.4 percent) and the state capital Düsseldorf (19.3 percent) also have high poverty rates.

The main victims are, as so often, children. Bäcker said that it was a sign of poverty that the number of children receiving basic income support (Hartz IV) in NRW was continuously increasing. A quarter of all children in NRW live in poverty. In Gelsenkirchen, the Hartz IV rate among the under-15s is 40.7 percent. In the northern districts of the Ruhr area, these rates are even higher.

The long-term study, “When child poverty grows up—how to get out of poverty,” was published at the end of last year and was presented on Friday by one of the authors, Dr. Irina Volf from the Frankfurt Institute for Social Work and Social Pedagogy (ISS). The AWO had commissioned the study from the ISS in 1997. For 20 years, from 1999 to 2018, the research project accompanied children who visited AWO childcare centres in structurally weak neighbourhoods or cities throughout Germany.

The results, which are also available online in an abridged version of the study, show a link between poverty in childhood and adulthood. At the last survey in 2018, the study participants were 25 years old; 23 percent of them lived in poverty.

Poverty at age 25 “is accompanied above all by massive restrictions in basic material provisions and participation as well as poor mental health,” the study states. Poor young adults were significantly more likely to have no savings and reserves, to miss holidays more often and to report restrictions in their mobility and too small or inadequate housing.

Cultural opportunities are diminished in 40 percent of poor 25-year-olds, who have poorer social networks and more often no stable partnership.

The study shows “that child poverty does not necessarily have to lead to long-term consequences, but the risk is significantly higher.” Persistent poverty in childhood and adolescence “carries a significantly increased risk of multiple deprivation” in young adulthood. At 25 years, 36 percent of formerly poor six-year-old participants in the study were still living in poverty; among the non-poor six-year-olds, 20 percent were living in poverty in 2018.

According to the authors, the results, based on life situations, showed “Young people with experience of poverty in childhood and/or adolescence have fewer resources at the beginning of adult life, both material, social and cultural.” Twenty-five percent of young people with experience of poverty reached a low level of school education (maximum secondary school leaving certificate), compared to only 3 percent of those who did not experience.

Despite having equal education, young women are twice as likely to be poor as their male peers. For example, 23 percent of the participants in 2018 lived in poverty, 73 percent of whom were women. Young single women are more often poor. The statistics confirm this finding of the study: the at-risk-of-poverty rate of single parents in NRW was 45.2 percent in 2018. “One fifth of all families in NRW have a single parent. Forty percent of these families live on Hartz IV,” said NRW AWO Chairman Scheffler.

Young adults with experience of poverty are much less likely to be in employment and work full-time much less often than their peers without experience of poverty. The statements of the young people who experience poverty made it clear that they lacked a life perspective, especially in the phase of career choice. These 25-year-olds often had no role models. Parents could, “in many cases, not offer them any support due to lack of personal experience.”

Offers from schools, the employment agency and even more so from job centres, where Hartz IV funds are applied for, were no substitute. “Young people who have contact with the job centre because of their family situation do not experience it as supportive, but feel pushed into a direction they do not want to go.”

Everyone at the Bochum event agreed that child poverty means income poverty for parents. In order to fight child poverty, an important issue was therefore “parents having good and livelihood-securing work,” as DGB’s Alexander Nöhring, managing director of the Future Forum Family, put it.

Far too many people in Germany work for far too little money. The economic upturn and the increase in the number of employees in recent years have not changed this situation. The upswing ends up in the pockets of the rich, not in those of working people.

For example, the DGB reported last week that the number of all Hartz IV recipients had dropped by 10 percent to 5.6 million people, and for those between 15 years and retirement age the drop was as high as 13 percent. For children up to 14 years of age, the number of Hartz IV recipients, on the other hand, has only decreased by 3.1 percent since 2016. Most poor children, over 840,000, live in a household where at least one parent is employed but earns so little that the wage is not enough to live on.

When DGB board member Annelie Buntenbach now stands up and claims, “Child poverty in a rich country like Germany is and will remain an unacceptable scandal,” this is pure hypocrisy.

The Hartz laws have created a huge low-wage sector. That was exactly what was intended 15 years ago. The then SPD-Green Party government under Gerhard Schröder (SPD) and Joschka Fischer (Greens) had commissioned Peter Hartz, then head of human resources at Volkswagen and a former IG-Metall union functionary, to “reform” unemployment and social assistance legislation in order to quickly force the unemployed into any low-paid job.

In 2004, the DGB took a clear and unequivocal stand against the mass anti-Hartz protests. To this day, it is the DGB unions that are responsible for the lowest wages.

The current evaluation of the Hartz IV figures by the DGB is primarily intended as a warning to the ruling class about the social powder keg that is smouldering here, which the AWO study proves. German society is characterized by high levels of social inequality and is highly polarized, the study participants stated. Disparities between those in poverty and the wealthy were frequently encountered. In their perception, the “principle of fairness in performance in conjunction with equal opportunities is not fulfilled by society.” Twenty-five-year-olds who have experienced poverty “believe less often in participation in elections as a democratic instrument of influence.”