To the consternation of big business and the corporate media, much of Canada’s railway network remains shut down by blockades established by First Nations people in support of the Wet’suwet’en Hereditary Chief-led opposition to the Coastal GasLink (CGL) pipeline.

Prime Minister Justin Trudeau convened a meeting Monday of the government’s secretive Incident Response Group (IRG). Established in 2018, the IRG is officially described as a “dedicated, emergency committee that will convene in the event of a national crisis or during incidents elsewhere that have major implications for Canada.” 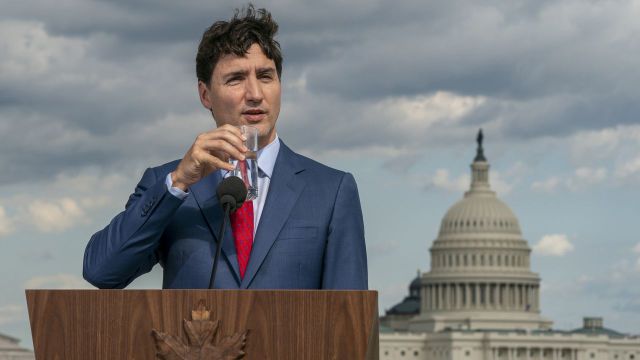 In a brief interaction with reporters at the meeting’s conclusion Trudeau said, “I understand how worrisome this is for so many Canadians and difficult for many people and families across the country. We are going to continue to focus on resolving this situation quickly and peacefully.”

Big business is livid that Trudeau has not acted on Conservative Party leader Andrew Scheer’s demand he immediately order police to dismantle the “illegal” barricades, which are now in their 13th day.

The heads of the Business Council of Canada, Canadian Chamber of Commerce, Canadian Federation of Independent Business, and Canadian Manufacturers and Exporters addressed a joint letter to Trudeau yesterday afternoon demanding immediate action. “The damage inflicted on the Canadian economy and on the welfare of all our citizens mounts with each hour that these illegal disruptions are allowed to continue,” the letter asserted.

Most of the provincial premiers, including Quebec’s Francois Legault and Ontario’s Doug Ford, are also publicly pressing the federal Liberal government to deploy the police against the protesters forthwith. Calling the rail blockades “unacceptable,” the Quebec premier said Monday “there have to be limits” to negotiations.

No one should be taken in by the Liberal government’s promises of dialogue. It similarly avowed its commitment to workers’ “collective bargaining rights,” while preparing legislation to outlaw the fall 2018 postal strike.

The government’s convening of the IRG—effectively a declaration that the blockades constitute a “national crisis”—and its repeated pledges to uphold the “rule of law” are unmistakable signs it is preparing state violence if the native protesters cannot be persuaded to dismantle their barricades.

Trudeau has yet to issue an ultimatum or publicly declare a date after which he will order police action. But following Monday’s IRG meeting his aides suggested to reporters the government has a secret deadline of the end of this week.

CN Rail has obtained multiple court injunctions against the barricades, but for the most part police have not acted on them. This is because they, and above all, their political masters fear the violent state suppression of yet another native protest will inflame the already fraught relations between the largely impoverished indigenous population and the Canadian state.

A violent, potentially fatal, clash with First Nation protesters would be particularly politically damaging to the minority Liberal government. It would shatter whatever popular credence remains for the Liberals’ much-ballyhooed “native reconciliation” agenda. While cloaked in social justice rhetoric, this agenda has been aimed from the outset at advancing the interests of Canadian big business. In the name of establishing a “nation to nation” relationship between the Canadian state and the native peoples, it seeks to promote a petty bourgeois indigenous elite that can provide “social license” for energy and other resource extraction projects on traditional native lands, and be used to defuse mounting social opposition among native workers and youth.

More generally, the resort to state violence would undermine the Liberals’ efforts, strongly promoted by the unions and NDP, to cast themselves as a progressive alternative to the hard-right Conservatives. It would also radicalize workers, as growing numbers enter into struggle, such as the 200,000 Ontario teachers and school support staff set to hold a one-day province-wide strike Friday.

The truth is, the Liberals have used a corporatist relationship with the unions, identity politics, and hollow rhetoric about social inequality as a smokescreen for implementing right-wing, anti-worker policies.

Especially noteworthy is how the purportedly pro-dialogue, “feminist,” and “pacific” Liberal government is ruthlessly pursuing the interests of Canadian imperialism on the world stage. Under Trudeau, Canada is carrying out a massive rearmament program, spending tens of billions on new warships and fighter jets. Moreover, Canada is ever more deeply integrated in Washington’s military-strategic offensives against nuclear-armed China and Russia, and in the oil-rich Middle East, as well as in its regime-change intrigues in Latin America.

The Liberals’ phony “native reconciliation” policy is bound up with its drive to increase Canadian oil and natural gas exports and its posturing on climate change.

The CGL pipeline, which is to transport natural gas from northeastern BC to the Pacific coast port of Kitimat, is critical to realizing the plans of the federal Liberal and BC NDP governments to make Canada a major exporter of liquefied natural gas (LNG) to Asia. Trudeau has repeatedly boasted that the $40 billion Kitimat LNG project would be the largest ever single investment in Canada.

Speaking in parliament yesterday, Trudeau cautioned against “those who would want us to act in haste,” effectively appealing to the ruling class to give his government more time to enlist the leaders of the Assembly of First Nations and other government-recognized indigenous groups in seeking to shut the blockades down.

Scheer, in reply, mocked Trudeau, calling his speech “the weakest response to a national crisis in Canadian history.” He denounced Trudeau for failing to condemn the “illegal” actions of the “radical activists,” and charged that “the prime minister has emboldened and encouraged this kind of behaviour.”

Like CN Rail management, Scheer demagogically tried to rally support for police action by invoking the hardships facing the workers that CN and other companies are laying off because of the crippling of freight traffic.

For its part, the NDP called Monday for an emergency House of Commons debate on the blockades. “The prime minister’s refusal to take more substantive and timely action has allowed tensions to rise, put significant pressure on the Canadian economy and threatened jobs across the country,” wrote NDP House leader Peter Julian in his request.

Yesterday, NDP leader Jagmeet Singh joined the leaders of the Bloc Quebecois and Greens in a closed door meeting with Trudeau to discuss how to end the protests.

Canada’s social democrats, in the form of British Columbia Premier John Horgan, sanctioned the police’s initial violent crackdown on the Wet’suwet’en barricade on February 6 and 7 as necessary to maintain “the rule of law.”

The numbers participating in the blockades and other solidarity protests are comparatively small. Nevertheless, broad sympathy exists in the population for the protesters due to the widespread recognition that the Canadian state has perpetrated manifold historic injustices against the native peoples. There is also strong hostility toward the Liberals’ sham climate change policy, not to mention mounting opposition toward the ruling elite as a whole under conditions of growing working class struggles against austerity, job and pay cuts, and attacks on pensions and other social rights.

The politicians and media’s invocations of the “rule of law” to back their demands for police action to snuff out the indigenous protests are utterly hypocritical. Canada’s ruling elite has rewritten, and outright violated, the law on countless occasions to seize land from the native peoples and condemn them to poverty and misery.

With its “law-and-order” rhetoric the elites are whipping up the most reactionary political forces. Media commentary has exhorted Trudeau to model himself after Margaret Thatcher in her use of mass police violence to break the 1984-85 British coal miners’ strike and his own father, Pierre Elliott Trudeau, who imposed martial law in Quebec in the fall of 1970, on the pretext that two Front de Libération du Québec kidnappings constituted an “apprehended insurrection.”

Working people must emphatically oppose any move to violently crush the indigenous blockades. Such a development would not only represent a frontal attack on democratic rights. It would set a dangerous precedent for the violent state suppression of mass protests and other forms of opposition from all sections of the working class.

That being said, the protesters’ politics, based on a native nationalist perspective that seeks to secure “self-government” within the Canadian capitalist state on the basis of appeals to the establishment for a “nation-to-nation relationship,” offer no way forward. Were such an initiative to be realized, it would result in the consolidation of a tiny privileged political elite within the Native population tasked with policing impoverished indigenous workers and youth both on and off reserves.

The historic oppression of the Native peoples and the myriad social ills this has produced can be overcome only through the mobilization of the working class as a whole, native and non-native, in the fight to put an end to capitalism and establish socialist equality for all.