The coronavirus outbreak spreading from Wuhan in China’s Hubei province surged globally this weekend, as case loads increased in Italy, Iran and South Korea. Medical staff are racing to avert a deadly pandemic, underscoring the need for a coordinated, international offensive to halt the spread of the disease.

China remains the center of the epidemic, with 652 new cases and 99 new deaths Sunday, bringing the total number of cases in China to 76,940, with 2,444 deaths.

The disease is steadily moving across Asia and Europe. Moreover, due to its long incubation period, it may have already infected many in the Middle East, Africa and the Americas undetected. On Friday, World Health Organization (WHO) chief Tedros Adhanom Ghebreyesus warned that while “we are still in a phase where containment is possible … our window of opportunity is narrowing.” 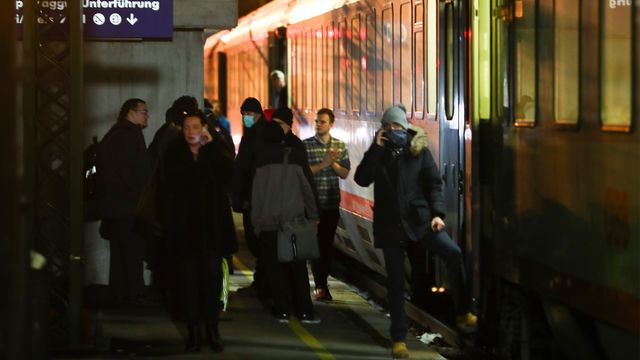 People stand on the platform near a train stopped by authorities at the train station on the Italian side of the Brenner Pass, Italy [Credit: AP Photo/Matthias Schrader]

In South Korea, where 166 new cases were confirmed and four people died, bringing the total sickened to at least 602, the government declared a level four health emergency, the country’s highest. In Daegu, the current epicenter of the disease in South Korea, Mayor Kwon Young-jin shut down schools, church services, malls and other public gatherings, calling the disease an “unprecedented crisis.”

The danger that Europe will see a full-scale epidemic is rising. Italy put several northern towns under quarantine over the weekend, canceling cultural events, religious events and school and university classes, as 149 new cases were detected, bringing the total from three on Friday morning to 152, of whom three have died.

Yesterday, French Health Minister Olivier Véran said he is “attentively monitoring the situation in Italy.” He also said he considers significant numbers of new cases in France “very probable,” and that he “is preparing” for “an epidemic.”

Of particular concern is the fact that a group of coronavirus patients near Venice has no known link to China. This infection apparently had an unknown European source. The Italian government has announced that the police and the army will be mobilized to enforce quarantine orders, and Austrian officials have already turned back an Italian train at the border.

WHO doctor Walter Ricciardi blamed the Italian government, saying that “A serious mistake was made not to quarantine people who arrived in Italy from China.” He added that “within two weeks, we will know if we are facing an epidemic.” In the meantime, he advised Italians to “avoid crowded places: metros, buses, trains, schools, discos and gyms.”

In Iran, authorities shuttered much of the country after a sixth coronavirus death, with 28 cases reported so far. Authorities suspect that Chinese construction workers in Qom who traveled back to China for Lunar New Year last month may have brought the disease to Iran. There are also unconfirmed reports that coronavirus patients sicken and die much faster upon admission to hospital in Iran than in China, possibly because the virus there is now spreading from their lungs to their hearts.

The Iranian government has ordered the closure of schools, universities and theaters in Qom, Markazi, Gilan, Ardabil, Kermanshah, Qazvin, Zanjan, Mazandaran, Golestan, Hamedan, Alborz, Semnan, Kurdistan and the capital Tehran. The head of Qom’s medical sciences university, Mohammadreza Ghadir, issued an appeal on Iranian state television, declaring, “We are on the front lines, we need help… If I can say one thing, it is: ‘Help Qom!’”

Pakistan and Afghanistan closed their borders with Iran this weekend amid fears that the disease could spread from Iran across the Middle East, where medical systems have been devastated by decades of US-led imperialist wars and economic sanctions. Two Iranian tourists tested positive for coronavirus in the United Arab Emirates on Saturday, and Lebanon confirmed its first coronavirus case Friday, a 45-year-old woman returning from Qom, a famous pilgrimage site.

Africa currently has only one confirmed coronavirus case, hospitalized in Egypt, but there is rising concern that there may already be many undetected cases there—arriving either from China, which has extensive investments on the continent, or through third countries in Europe and the Middle East.

The coronavirus epidemic is extremely serious. For now, government officials often present a WHO estimate of the deadliness of the disease based on dividing the number of coronavirus victims by the number confirmed infected. This calculation, which shows that 2 percent of those known to have contracted the disease have already died, appears to substantially underestimate the seriousness of the disease and the challenges involved in treating it.

As of yesterday, a worldwide total of 78,993 people were confirmed to have been infected by the coronavirus. Of the 25,889 no longer being treated, 2,470 (9.5 percent) were dead and 23,419 had recovered. Of the remaining 53,104 active cases, 41,535 (78 percent) were suffering from mild symptoms, while 11,569 (22 percent) were in serious or critical condition, requiring hospitalization and oxygenation to treat pneumonia triggered by the coronavirus.

Thus, about 20 percent of diagnosed cases require high-tech, labor-intensive care to stay alive. Overall, of those cases where treatment has ended, roughly one in 10 ended in death. Were the number of patients to continue to grow internationally at the current rate for several months, this could overwhelm health systems in even the most advanced economies.

Of course, many people have contracted coronavirus without becoming seriously ill and thus have not been diagnosed, so that overall rates of serious illness and death are lower. However, this is little comfort: It appears that as yet undetected coronavirus carriers can nonetheless spread the disease to others, who do get sick or even die. Particularly if the coronavirus became endemic in areas of Africa or Central Asia, with fewer advanced hospitals, this could have devastating consequences.

In the meantime, humanity is being brought face to face with the consequences of decades in which trillions of dollars were spent on waging destructive imperialist wars and showering an obscenely wealthy financial aristocracy with public funds. From Mali and the Congo to Syria, Iraq and Afghanistan, millions have died in imperialist wars of occupation or proxy wars that left only a trail of devastation in their wake. In these areas, critical medical infrastructure has either been destroyed or was never built, leaving hundreds of millions of people virtually defenseless.

As for North America and Europe, they have subjected their medical centers to endless rounds of hospital closures and funding cuts costing billions of euros. In European countries, including Portugal and France, nurses protesting a decade of European Union wage freezes and underfunding since the 2008 crash have played a key role in strikes against austerity. Yet capitalist governments of various political colors have repeatedly threatened them with dismissal or assault by riot police.

British authorities issued a statement on the coronavirus declaring, “Our world class National Health Service is well prepared, and we are doing everything we can to protect the public.” This drew a caustic reply from John Campbell, a British doctor commenting on coronavirus online.

Working in local hospitals, he said, “often we weren’t prepared for a Monday morning.” He continued: “If there were a few cases of chest infections or influenza, we were struggling. The idea that there could be an epidemic of coronavirus on top of that and that we’d be well prepared is absolute nonsense. So how can we criticize China, Iran and North Korea for not telling us the whole truth, when the official voice of the UK government is telling me that we are well prepared… for thousands of people getting sick all at the same time?”