Echo in the Canyon: The “California sound” of the mid-1960s

Echo in the Canyon celebrates the music and performers who lived or worked in the Laurel Canyon neighborhood (in the Hollywood hills) of Los Angeles in the mid-1960s. The documentary—directed by producer and former head of Capitol Records, Andrew Slater, and hosted by Jakob Dylan, son of Bob Dylan—features musicians from such famed groups as the Byrds, the Mamas and the Papas, and the Beach Boys. The late Tom Petty, the Beatles’ Ringo Starr, Eric Clapton, David Crosby, Michelle Phillips, Jackson Browne and producer Lou Adler are among those interviewed. 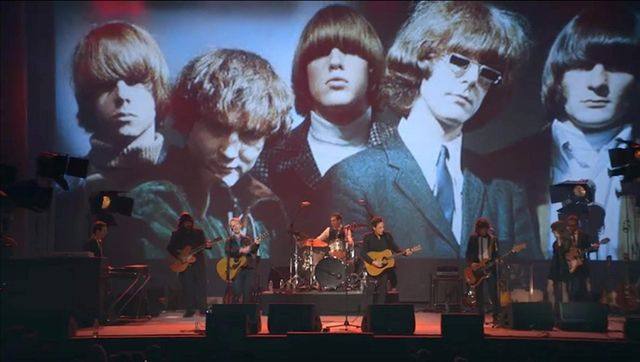 The film concentrates on the years 1965-67 in a particular corner of the popular music world, when several musical traditions were joined to create a distinct sound, which became known as “folk rock.”

Slater’s work is an amiable, moving and, at times, fascinating look at a group of talented musicians who are relatively honest and occasionally insightful about their experiences. The music of that time reflected social and cultural changes, including the unraveling of the cultural stagnation of the 1950s.

Echo’s inspiration was the 2015 concert at LA’s Orpheum Theatre, where Jakob Dylan, along with younger artists Beck, Cat Power, Regina Spektor and Fiona Apple, performed songs by the Mamas and the Papas, the Beach Boys, the Association and Buffalo Springfield. The Beach Boys’ tune “Just Wasn’t Made for These Times” is hauntingly memorable. 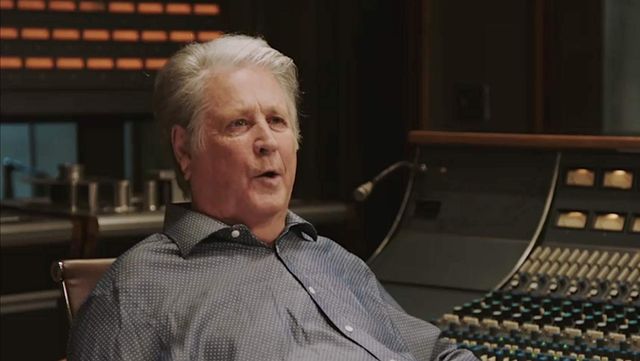 Brian Wilson in Echo in the Canyon

Both in performance and throughout the movie, Dylan is a little too self-consciously understated, but nonetheless affable in his interaction with the documentary’s subjects.

It is more than half a century since some of these songs were initially played on the radio. “It was the first time a song of poetic depth and grace had become a hit song and it inspired a whole generation of writers to write differently and to come to California, which gave birth to the Laurel Canyon scene,” asserts one interviewee. This is an exaggeration, of course, considering the history and achievements of American popular music, but something new undoubtedly had emerged.

The Byrds—whose original 1964 lineup consisted of Jim (later Roger) McGuinn, Gene Clark, David Crosby, Chris Hillman and Michael Clarke—were at the center of this development. Their electrified and electrifying version of Bob Dylan’s “Mr. Tambourine Man,” released in April 1965, had a significant impact on the musical world, as did the release of their first album of the same name, in June 1965, and their second, Turn! Turn! Turn!, in December of that year. Along with original material, the albums treated a number of folk or popular songs in a fresh, melodic and driving fashion.

In fact, someone asserts, rather sweepingly, that if McGuinn “had just played the opening notes to the Byrds’ debut album and dropped dead, he would have still exercised the most pronounced influence over the folk rock movement in 25 years.” A good deal of attention is paid to McGuinn’s “jangly,” twelve-string Rickenbacker guitar playing. 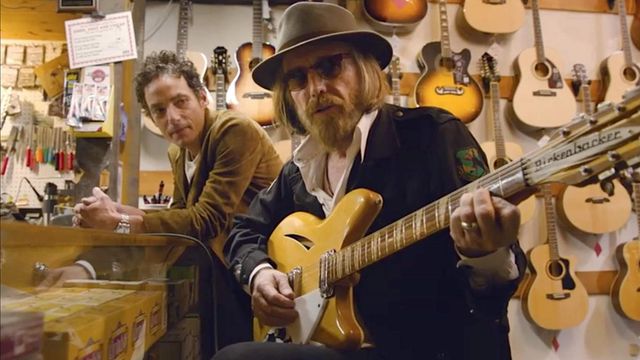 Jakob Dylan and Tom Petty in Echo in the Canyon

Along with commentary about the music of the time, candid tales abound in Echo in the Canyon. Michelle Phillips of the Mamas and the Papas disarmingly recalls that then-husband and bandmate John Phillips wrote “Go Where You Wanna Go” in response to her marital infidelities. She also recounts a story about Brian Wilson of the Beach Boys: “They lived right down the street from us, Brian and Marilyn [Wilson’s wife at the time]. And one day I went over there and the whole living room was full of sand. And there was nothing in the living room but a Steinway and a piano bench and just all sand. And I looked at her and I said what is going on? She said I know it’s crazy but he’s writing some great songs.”

In the course of the film, many of the musicians acknowledge Wilson’s singular contribution: “I was a sucker for Brian’s work right away,” one notes. “I was very close friends with [musician and producer] Felix Pappalardi and he was the guy who pointed out to me the Bach-like qualities. And he said listen to this chord sequence. They’re using like Bach chordal movements in there.”

Wilson himself movingly confesses that the “Beatles were probably my favorite group, you know. I really liked them a lot. With Rubber Soul, one of my buddies brought it over and played it for me. I said I can’t believe this album! You know? He kept playing it and playing it and I said wow! I couldn’t believe it. That made me write the Pet Sounds album.” 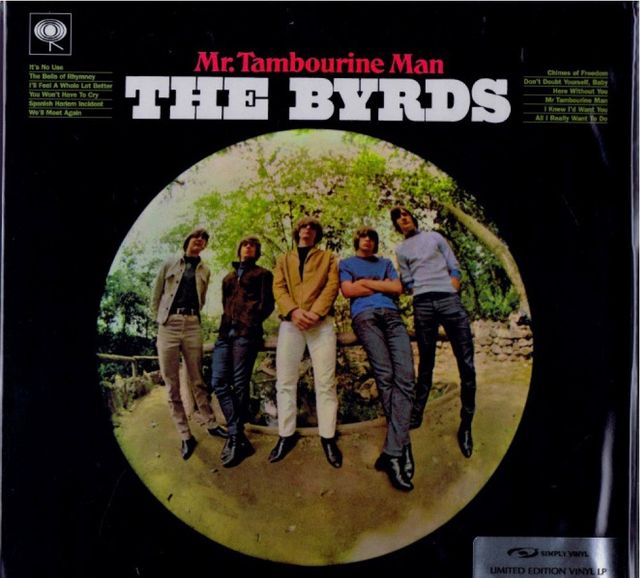 Lou Adler describes the gestalt of the time: “You just felt like you could do anything, you know. You just felt like there was nothing stopping you.” Expressing the movie’s predominant sentiment, Graham Nash of Crosby, Stills & Nash asserted that the “power of music is undeniable. I truly believe it can change the world.”

Anecdotes are interspersed with archival material and clips from the 1969 film, Model Shop, directed by French filmmaker Jacques Demy. That movie, a drama about a soon-to-be-drafted architect (Gary Lockwood), provides the documentary’s only reference, and an oblique one at that, to the Vietnam War.

Another musician suggests that the “era begins with this collective idea of these musicians and this creative force coming together to make something bigger. And then the era ends when it becomes more about the individual, yeah, searching their own life and their own path and, ah, yeah, you get all these groups breaking up.”

Crosby elaborates: “Bands tend to devolve. They evolve up the point where they’re exciting and they’re new and they’re good, and then after that they work their way slowly downhill until it’s turn on the smoke machine and play your hits. And that’s not good enough for me. It’s just not.” 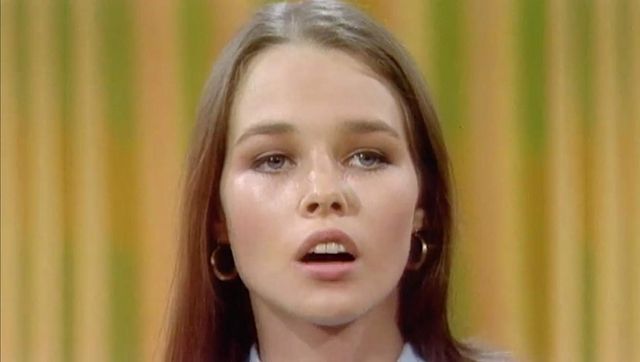 Michelle Phillips in Echo in the Canyon

As charming as the documentary is, social events are almost entirely excluded from Echo in the Canyon. The musicians themselves seem essentially unaware of the social and cultural terrain in which their music germinated.

The musical cross pollination of the mid-1960s was made possible by various changes in American society. Economic processes, including the vast migration of both black and white Southerners to factories and cities in the North, and the ongoing Civil Rights movement, broke down barriers between races and ethnicities, helping to combine blues, country and other traditions. The anti-establishment atmosphere of the time, encouraged as well by the growing opposition to the expanding Vietnam War, made easier the rejection of musical conventions. Certain formalities and rigidities also tended to dissolve in California—the “promised land,” where “anything seemed possible”—a state to which great numbers of Americans were migrating in the 1950s and early 1960s.

The brief “utopian” musical interlude of the mid-1960s eventually collided with the realities of the urban riots, the mass death toll in Vietnam, the series of political assassinations (the Kennedy brothers, Malcolm X, Martin Luther King Jr.) and the general shift to the right in official politics represented by the victory of Richard Nixon in 1968. The series of brutal murders committed by the Manson Family in Southern California in July and August of 1969, themselves the sign of a society in crisis, no doubt helped bring the idyll to an end.

Echo in the Canyon, however, reveals that the music still resonates.