The extreme right-wing terrorist attack in Hanau, which killed nine and injured six others Wednesday last week, has shocked and alarmed millions. That same evening and the day after, spontaneous vigils and demonstrations against right-wing terror were held in more than 50 cities, in which tens of thousands of people took part. 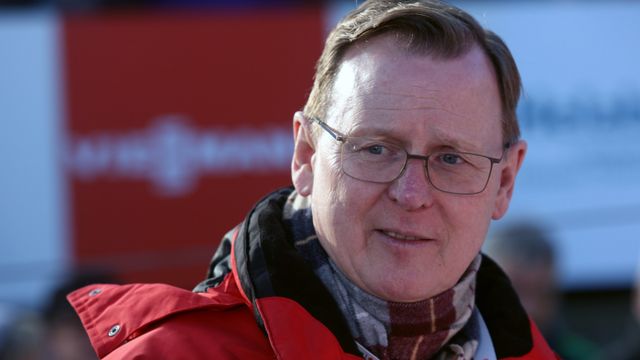 Two weeks beforehand, when the delegates of the Christian Democratic Union (CDU) and Free Democratic Party (FDP) in Thuringia, together with the fascists of the Alternative for Germany (AfD), elected a state premier, there were already many spontaneous protest rallies and angry reactions from the population.

The Left Party has responded by throwing itself at the CDU. It sees the mass demonstrations against fascism as a threat to bourgeois order and is working to strengthen the state apparatus and the security organs. In view of the massive opposition to neo-Nazis and right-wingers, the Left Party is actively seeking to forge an all-party alliance and work more closely with the CDU.

Only two days after 20,000 people demonstrated in the Thuringia state capital, Erfurt, against the pact between the CDU, FDP and AfD, former state premier Bodo Ramelow proposed, on behalf of the Left Party, to appoint former CDU state premier Christine Lieberknecht as head of government.

The plan called for the CDU to form a “technocratic government” in close collaboration with the Left Party, the Social Democratic Party (SPD) and the Greens, with just three ministers for a good two months, and to prepare the election of a new state parliament. The same party that had just made close pacts with the AfD of fascist Björn Höcke was being asked by the Left Party to take over the state executive.

However, the CDU set conditions. It wanted to prevent holding new elections quickly, because its vote had already dropped to 13 percent in the polls. For their part, Ramelow and the Left Party were willing to negotiate and make further concessions. But then Christine Lieberknecht withdrew her commitment and declared she was not available for a long transitional government. Instead, she called on her party to “find a way out with the Left Party.”

The Left Party did not give up its pursuit of the Christian Democrats, appealing to their “state political responsibility.” Ramelow tweeted that responsibility for the state must be the first priority for every politician, regardless of which party. “First the federal state, then the party and only then the person.”

In seven hours of negotiations with the CDU, in which delegations from the SPD and the Greens also participated, Ramelow proposed a new plan. The CDU should ensure his re-election as state premier was secured in the first ballot. It should guarantee that he would receive the four votes that the Left Party, the SPD and the Greens lack for the necessary absolute majority in the state parliament. In return, there would be no immediate new elections and the election date would be postponed until April next year.

Ramelow also granted the CDU a kind of veto right over his government policies, declaring the Left Party willing to renegotiate the already approved state budget for next year. The negotiating group of the Thuringia CDU then signalled its agreement.

But then the federal CDU stepped on the emergency brake. CDU Secretary-General Paul Ziemiak insisted that the CDU’s party conference resolutions prohibited such political cooperation with the Left Party.

The president of the Bundestag (federal parliament), Wolfgang Schäuble (CDU), also reiterated his rejection of cooperation with the Left Party in Erfurt. He told business daily Handelsblatt, “We had and have colleagues in the Bundestag who have been victims of the Stasi.” The “fight against communism” is a core element of the CDU, he emphasized.

A short time later, the chairman of the Thuringia CDU, Mike Mohring, also adopted the line of the CDU leadership in Berlin and announced his resignation as state chairman. “I took office with the clear promise to end red-red-green [as the outgoing SPD–Left Party–Greens coalition was called] in Thuringia and not to extend it,” he told the tabloid Bild-Zeitung .

Now it is completely unclear how things will continue in Thuringia. What is certain, however, is that Left Party leader Ramelow is seeking close cooperation with the same CDU that made pacts with the AfD and fascist Höcke earlier this month.

The federal leadership of the Left Party supports this course and now puts forward the CDU as a “left” force in addition to the SPD and the Greens, responsible for massive austerity and committing German troops to military combat for the first time since the end of the Second World War. “The fact that the CDU is finally correcting the exclusion of left-wing ideas is good news for the anti-fascist consensus of the constitution,” rejoiced Left Party leader Katja Kipping on Twitter last weekend.

The assertion that the CDU represents an “anti-fascist consensus” is obvious nonsense. Since it was founded after the fall of the Hitler regime, many former Nazis found their new political home inside it—including Hans Globke, head of the Chancellery under the first post-war government leader Konrad Adenauer, and Kurt Georg Kiesinger, who was federal chancellor from 1966 to 1969.

The political biographies of the leading politicians of the AfD also speak volumes. The AfD was created in 2013 more or less as an offshoot of the CDU. A large proportion of its members of parliament were previously members of the CDU or other establishment parties.

AfD Honorary Chairman Alexander Gauland, who glorifies Hitler’s Wehrmacht (army) and describes the Nazi regime as just so much “bird shit in over a thousand years of successful German history,” was active in the arch-conservative Hesse CDU for 40 years before co-founding the AfD in 2013. Among other things, he headed the office of Hesse state Premier Walter Wallmann (CDU).

Albrecht Glaser, who is often referred to as the chief theoretician of the AfD, was also a CDU municipal politician and city treasurer in Frankfurt am Main for decades. During his studies at the beginning of the 1960s, he was a leading member of the Allemannia Heidelberg right-wing fraternity, and later became the Federal Spokesman of the Deutsche Burschenschaft (federation of right-wing fraternities). After 42 years of CDU membership, he was one of the first to join the AfD in spring 2013.

It is no different with Martin Hohmann, who has sat in the Bundestag for the Hesse CDU since the end of the 1990s and delivered an anti-Semitic speech on the anniversary of German unification in October 2003. Today, he again sits in the Bundestag, now for the AfD, and works closely with all the other establishment parties as a full member of the Audit, Budget and Petitions Committee and as a deputy member of the Bundestag’s Defence Committee.

The same picture emerges with regard to the AfD in Thuringia. Its most prominent former CDU member is Stephan Brandner, who entered the Bundestag in 2017 as the lead candidate for the Thuringia AfD. In 2018, he was then elected chairman of the influential Committee on Legal Affairs by the votes of the grand coalition, at the suggestion of then SPD parliamentary party chairman Thomas Oppermann.

The Left Party’s intensive wooing of the CDU, which recently voted unanimously with the AfD, only strengthens the extreme right-wing AfD. And it aims to disorient, demoralize and suffocate mass resistance against it.

The struggle against fascism and the rise of the AfD requires a political struggle against all bourgeois and pro-capitalist parties that directly or indirectly pave the way for it. Only the mobilisation of the working class based on a socialist programme can prevent the return of fascism and war.

Germany: Tens of thousands take to the streets against right-wing terror
[25 February 2020]