India: Death toll in BJP-instigated violence in Delhi rises to 38

After three days during which Delhi was convulsed by horrific communal violence, instigated by local leaders of the ruling Bharatiya Janata Party (BJP), police and government authorities claimed Thursday that “order” had been restored to India’s national capital.

By all accounts, Delhi and especially the city’s northeast—ground-zero for the city’s worst communal violence in decades— remain on tenterhooks. 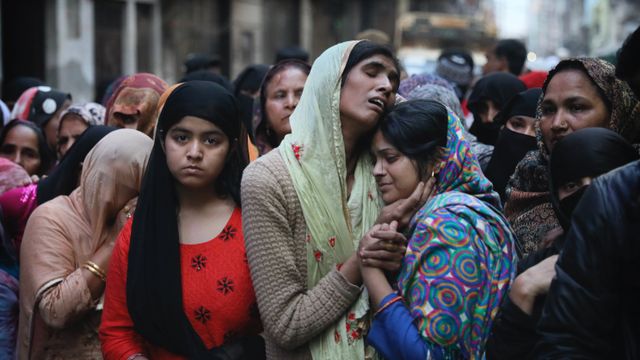 Relatives and neighbors wail near the body of Mohammad Mudasir, 31, who was killed in communal violence in New Delhi, India, Thursday, Feb. 27, 2020 (AP Photo/Manish Swarup)

Yesterday, thousands of police and paramilitaries were deployed, and Delhi’s streets and the city’s northeast remained under curfew and other restrictions under Section 144 of the country’s criminal code.

With the violence subsiding, traumatized Delhi residents began to take stock of the damage to their homes, shops, neighbourhoods, and lives. Whether the Muslims who fled in terror from dwellings in integrated areas will be able to return to their homes—now, or ever—is entirely unclear.

Yesterday, as more bodies were found and several persons who had previously been hospitalized succumbed to their injuries, the official death toll rose by 10 to 38. The seriously injured number in the hundreds.

This week’s events constitute far and away the worst outbreak of communal violence in Delhi since 1984, when Congress Party leaders instigated an anti-Sikh pogrom, following the assassination of Prime Minister Indira Gandhi.

Evidence, including from CCTV footage, photographs and cell-phone videos, has begun to emerge that depicts not only vicious communalist attacks on Muslims and the torching of Muslim-owned homes and businesses, but also the connivance of the Delhi police in Hindu supremacist violence. There are numerous eyewitness accounts of police officers allowing Hindu thugs to attack Muslims unimpeded and even joining in their attacks.

Although the Delhi National Capital Territory (NCT) is governed by a rival party, the Delhi police are under the control of the national BJP government, not the NCT administration, and directly answerable to Home Minister Amit Shah, the chief henchman of Indian Prime Minister Narendra Modi. Shah, like Modi, is a notorious Hindu supremacist.

The BJP is furiously trying to shift the blame for the Delhi rampage onto its political rivals. This includes claims that the opposition parties “agitated” Muslims and encouraged “violent” antigovernment protests over the past two months, with their denunciations of the recently adopted and patently anti-Muslim, Citizenship Amendment Act (CAA).

But nothing can cover up the political responsibility of Modi and his BJP government for the explosion of Hindu communalist violence in India’s capital.

In response to a sharp downturn in India’s economy and the growth of social opposition, above al,l from the working class, the BJP government has accelerated implementation of its Hindu supremacist agenda over the past year.

By ramming through measures that repudiate in all but name India’s claim to be a secular state and assert Hindu primacy, Modi, the BJP and their ideological mentors in the fascistic RSS aim to embolden their Hindu chauvinist supporters, and disorient and split the working class.

Since last December, Delhi has been at the centre of the wave of anti-CAA protests that has engulfed the country, uniting workers, students and professionals across ethnic, religious and caste lines.

Unnerved by the scope and intensity of the opposition to the CAA, Modi and his BJP have lashed out with state violence and communalist incitement. During the campaign for this month’s Delhi assembly election, BJP leaders boasted about the bloody suppression of anti-CAA protests by the BJP state government in neighbouring Uttar Pradesh, in which some 20 people died. They also publicly advocated violence against anti-CAA protesters, leading their supporters in chants of “shoot them down.”

By all accounts the immediate trigger for the communal violence was the “ultimatum” issued last Sunday by a local BJP leader Kipal Mishra. After mobilizing his followers to occupy a street in northeast Delhi, he announced that if the Delhi police did not clear the streets of anti-CAA protesters within “three days,” he and his supporters would do it.

Clashes between Mishra’s followers and Muslims soon followed, and on Monday, as visiting US President Donald Trump was singing Modi’s praises, northeast Delhi was engulfed in communal violence.

India’s prime minister was conspicuously silent on the violence until Wednesday, when he issued a series of vapid tweets, appealing to his “brothers and sisters” to maintain “peace and brotherhood.”

At a press conference Tuesday shortly before leaving India, Trump, eager to expand Washington’s anti-China strategic partnership with India, went out of his way to praise Modi and his government for upholding “religious freedom.”

India’s judiciary has a long and infamous record of aiding and abetting the Hindu right.

But on Wednesday, a Delhi High Court judge felt obliged to admonish the police for not taking any legal action against three BJP leaders—the aforementioned Kapil Mishra; Anurag Thakur, Modi’s Minister of State for Finance; and West Delhi MP Parvesh Verma— who had delivered anti-Muslim hate speeches, creating the political climate for this week’s events, if not directly inciting the violence.

“In this city, we cannot allow another 1984 riot,” said Justice Muralidhar, referring to the anti-Sikh pogrom which claimed more than 2,700 victims.

After noting that the police had not even filed First Information Reports (FIR), that is, opened a criminal investigation against the BJP leaders, Justice Muralidhar said, “These speeches are leading to more speeches. When you don’t register an FIR, a wrong message goes out. People aren’t deterred from repeating it. Is it not a cause for alarm?” Acting on behalf of the BJP government, Solicitor General Tusha Metha sloughed off the court’s criticisms, saying it would reply when the situation is “conducive.”

Within hours of this exchange, the Ministry of Law and Justice in a transparent act of retribution transferred Justice S. Muralidhar from the Delhi High Court to the Punjab and Haryana High Court.