Two patients infected with Covid-19, the coronavirus that broke out in Hubei province, China last December, passed away over the weekend at the Evergreen Health Medical Center in the Seattle suburb of Kirkland. Doctors said that a man who died on Saturday had no links to anyone who had traveled to, or was in contact with, someone from a high-risk country. He suffered underlying health issues that may have contributed to the course of his illness.

Viral genetic testing has linked his infection to the first case in the US from January. Health authorities therefore worry that the epidemic has been spreading unchecked for several weeks, with hundreds more people possibly infected. 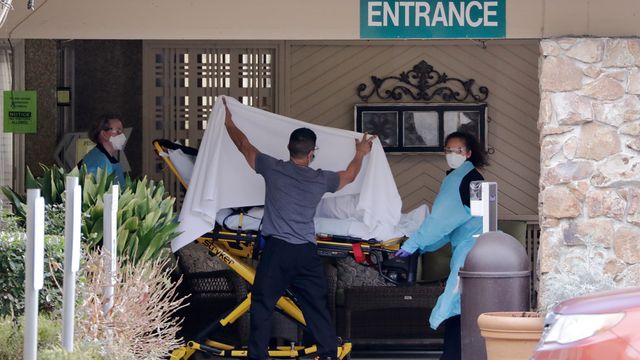 A person is taken by stretcher to a waiting ambulance from a nursing facility where more than 50 people are sick and being tested for the COVID-19 virus, Saturday, Feb. 29, 2020, in Kirkland, Wash. (AP Photo/Elaine Thompson)

Including a man who died on Sunday—the second death in the US—there are six confirmed cases involving elderly residents at a long-term care facility in Kirkland, Seattle, who are at risk due to their confinement and debilitated health status. According to Dr. Frank Riedo, medical director of Infection Control at Evergreen, “This is just the tip of the iceberg … over 50 individuals associated with Life Care [the long-term care facility] are reportedly ill with respiratory symptoms or hospitalized with pneumonia or other respiratory conditions of unknown cause and are being tested for Covid-19.”

Two other “presumptive positive” cases, pending confirmation by the Centers for Disease Control and Prevention (CDC), have been reported in Washington state. One is a teenager in Everett who reported no travel history. Health officials said his symptoms are mild and he will remain in isolation at home. The second case involved a woman in her 50s who had recently been in Daegu, South Korea, the epicenter of the outbreak in that country.

The sudden appearance of Covid-19 cases prompted Washington Governor Jay Inslee to declare a state of emergency. This gives the state additional resources and funding, including the use of the national guard, to prepare for a large-scale outbreak of the disease.

Medical facilities and hospitals have been frustrated by the lack of test kits, while strict guidelines set by the CDC for the testing of individuals has delayed the ability to investigate and track new cases. The Food and Drug Administration (FDA) issued a new policy over the weekend that grants emergency use approval to laboratories and hospitals that have proven they have diagnostic kits that can confirm the presence of the 2019 novel coronavirus, recently named SARS-CoV-2.

The FDA policy states: “To effectively respond to the COVID-19 outbreak, rapid detection of cases and contacts, appropriate clinical management and infection control, and implementation of community mitigation efforts are critical. This can best be achieved with the wide availability of testing capabilities in health care settings, reference, and commercial laboratories, and at the point of care.”

Clinical and hospital laboratories have initiated the process to begin testing for the virus in their facilities. This will allow real-time analysis of the magnitude of the health crisis that has gripped headlines for several weeks. Until recently, the CDC has been able to run fewer than 500 tests in total. Head of the Association of Public Health Laboratories, Scott Becker, told NPR that they expect that more than 40 labs will be able to test for the virus by the end of the weekend and more labs will follow in a short time.

Vice President Mike Pence and the Department of Health and Human Services (HHS) Secretary Alex Azar made the rounds on the Sunday news shows, continuing with bald assertions that the contagion is under control and the number of outbreaks is quite low. Additionally, they assured viewers that the government was working with private contractors to distribute tens of thousands of test kits.

The negligence on the part of the Trump administration and the HHS—in light of what the World Health Organization, CDC, medical professionals and scientists have been saying—is unconscionable. When time was of the essence to implement preventive strategies, implement point of care testing, and ensure test kits were available, they were instead engaged in assuring investors that China would be putting its factories back online in short course and declaring that the financial markets were sound. At each step in the development of this threatening health crisis, they have downplayed the seriousness and dangers that this crisis poses.

The case at Travis Airforce Base in California is an example of gross incompetence. A high-ranking HHS whistleblower exposed that health officials sent to the base were woefully ill-prepared and untrained to assist evacuees from Japan. They not only exposed themselves to infected patients, but then risked the public off the base as they entered and left at their discretion, without regard for public safety.

Aside from the concerns raised by health and government officials, researchers have been able to examine the genetic makeup of the coronavirus from the first infected individual diagnosed on January 21 in Washington state and compare it to the individual who died over the weekend.

Both these individuals lived in the same county, but do not have known contacts with each other. The phylogenetic analysis of the virus’s genetic sequence indicates that the virus which killed the Washington man descended from the first case on January 21. Despite some minor alterations, they both share a rare genetic variation, which implies that the contagion has been spreading in the community for several weeks. Officials did not heed what the scientific reports were warning. Computer modeling places the number of undetected cases at between 150 and 1,000 people.

To appreciate the disastrous development that could have been averted, it helps to review the timeline.

On January 21, Governor Inslee of Washington state announced the first case of Covid-19 in the US. At the time, China was reporting hundreds of cases of a pneumonia-like illness and several deaths caused by a novel coronavirus that was similar to the 2003 SARS virus.

The infected man, who is 35 years old and lives in Snohomish County, Washington, returned from Wuhan on January 15, 2020—before airports had implemented screening measures. While back in Washington state, he began to develop flu-like symptoms. As he was aware of the news about the mysterious virus in China, he sought medical attention four days after his return. He was admitted to Providence Regional Medical center in Everett for treatment.

Specimens collected from him were sent to the CDC in Atlanta, which confirmed he was infected with the Sars-CoV-2 virus. For the first few days, he remained stable with just mild symptoms of cough and fever. By day five, he developed respiratory difficulty, requiring supplemental oxygen, and was diagnosed with pneumonia. His status worsened, and his doctors decided to administer an unapproved treatment with Remdesivir, a known anti-viral medication that was developed for Ebola but found to be ineffective. It was reported he made a brisk recovery, and his treatment experience was the basis for trials taking place in China and currently being established in the US.

Officials reported that he had been in close contact with 65 people during his five days back in the US, including passengers on his flight and a luncheon with a group and patients at a local clinic where he sought medical attention. Local health departments said they were monitoring these individuals daily, but little information was provided on these follow-ups to the media. Additionally, there were 16 doctors and nurses treating him though they had limited contact during his isolation.

On February 4, the Snohomish County man was released to continue his recovery from home. He was to remain isolated and monitored by the Snohomish Health District. By this time, there were 11 confirmed cases of the coronavirus in the United States, with 260 people being monitored across 36 states. Yet no measures were instituted outside of “monitoring.” It remains unclear if all these individuals were tested or repeatedly reassessed.

The World Health Organization declared a global emergency after mainland China instituted massive lockdowns in several cities. Factories remained shuttered after the end of the Lunar New Year. More than 420 people had died, and new deaths were confirmed in Hong Kong and the Philippines.

By this point, several studies and clinical investigations had highlighted the unusual nature of this infection. It has a high rate of person-to-person passage. It ignores national boundaries and has now affected 68 countries. In most cases, fever is not the initial presenting symptom. It has a very long incubation period, making early detection very difficult. A few patients with negative tests later tested positive after they returned home. Patients that have recovered can be re-infected, though rarely. They can also continue to carry the virus and pose an infectious risk.

The number of countries affected and the number of new cases is accelerating across the globe. Internationally, there are now 89,071 confirmed cases and the death toll stands at 3,039, with the vast majority, 2,803, taking place in China’s Hubei province.

Italy confirmed 566 new cases overnight, with 1,694 infected individuals. The death toll stands at 34. Northern Italy, where the outbreak is taking place, is the country’s industrial engine and accounts for 40 percent of its industrial output. The economy is expected to take major blows.

France has seen 30 new cases, bringing to 130 the total Covid-19 infections in that country. President Emmanuel Macron has called for the banning of all gatherings of more than 5,000 people in confined spaces, as well as open environments. This will have a significant impact on sporting events and real estate conferences. It also provides the opportunity to use state measures against political demonstrations, such as the ongoing Yellow Vest protests.

In South Korea, 586 new cases have been registered, outpacing China, where there were 202. Across South Korea, there are now 4,212 confirmed cases and there have been 17 deaths. The city government of Seoul has asked prosecutors to bring charges against the founder of the Shincheonji Church, Lee Man-hee, for ignoring signs of the virus. Samsung Electronics, LG Display and Hyundai automotive companies are reeling from the implications of resuming production.

Anxiety is mounting in Iran as people recognize that the government has not come to terms with the potential enormity of the crisis. The virus death toll has reached 54 and the number of confirmed cases 978—though it is feared the figure is far higher. A retired teacher, Ziba Rezaie, from Qom, said succinctly, “The smell of disinfectants has become my nightmare. The city smells like a cemetery, a morgue.”