On eve of “Super Tuesday” primaries

The Democratic Party is engaged in a last-ditch effort to boost the struggling campaign of former Vice President Joe Biden and block the nomination of Senator Bernie Sanders. They fear that in today’s primary contests in 14 states, Sanders could open up an insurmountable lead in terms of number of delegates to the Democratic nominating convention. 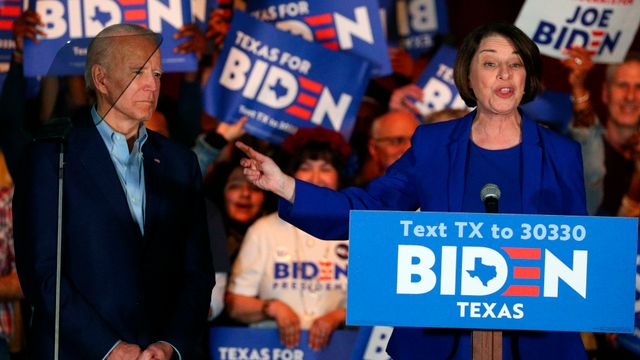 In the wake of Biden’s victory in the South Carolina primary Saturday, the party leadership has pushed two of the right-wing candidates for the presidential nomination, Senator Amy Klobuchar and former South Bend, Indiana Mayor Pete Buttigieg, out of the race. Both traveled to Dallas, Texas Monday to endorse Biden, with Buttigieg appearing with former vice president at a local restaurant, and Klobuchar addressing a campaign rally in the evening.

Former President Barack Obama reportedly took the lead in pressuring Buttigieg in a phone call from the former commander-in-chief to the former naval intelligence officer, telling him this was his “maximum leverage” for future influence in the Democratic Party. It is not known who spoke to Klobuchar, but she addressed a campaign rally in Salt Lake City, Utah on Monday morning as a candidate and 90 minutes later announced she was ending her campaign and endorsing Biden.

The line-up assembled on Monday behind Biden personifies the reactionary social forces that dominate the Democratic Party. Biden himself is the most right-wing of all the major candidates for the Democratic presidential nomination, steeped in the crimes of American imperialism during the eight years of the Obama-Biden administration, which followed his 36-year career in the US Senate, where he boasted of close relationships with reactionaries like Strom Thurmond and James Eastland, and, more recently, Mitch McConnell.

His “coalition” consists of upper-middle class factions based on identity politics of race and gender, such as Representative James Clyburn, whose backing was critical in South Carolina, and Senator Klobuchar; the military-intelligence apparatus, directly represented in this campaign by Buttigieg; and the financial aristocracy, whose support is still divided between Biden and billionaire Michael Bloomberg.

Sanders is unacceptable to the party because it has no intention of raising any issue of significant social reform in the 2020 elections. It wants to run a right-wing campaign, largely based on attacking Trump as a Russian agent, a re-run of the 2016 Hillary Clinton campaign, in which it seeks to gain the support of Wall Street and the CIA for the ouster of Trump.

If Elizabeth Warren has not yet joined Buttigieg and Klobuchar in withdrawing from the race, this has less to do with her personal calculations than the needs of the Democratic Party, which sees her candidacy as drawing votes from Sanders.

The formation of this stop-Sanders cabal disproves the very premise of Sanders’ own campaign, that the Democratic Party can be “captured” and transformed into a vehicle for social progress. What Biden & Co. denounce as “socialism” is Sanders’ advocacy of mildly reformist policies, involving only slightly higher taxes on the gigantic accumulation of wealth by the super-rich to finance improvements in social programs such as health, education and child care that already lag far behind those in many other industrialized countries.

While Biden was receiving endorsements, the Sanders campaign staged a series of mass rallies addressed by the candidate as he traveled coast-to-coast over the weekend: 6,500 people in Springfield, Massachusetts; 10,000 on Boston Common; 10,000 at a sports arena in Springfield, Virginia, in the Washington DC suburbs; 13,000 at Virginia Wesleyan University in Virginia Beach; 10,000 in downtown San Jose, California; and finally, on Sunday night, nearly 25,000 at the Los Angeles Convention Center.

Sanders’ campaign also announced Sunday that 2.2 million people had donated money in February, for a total of $46.5 million, the most for any single month.

Given this growing popular support, it is possible that the anti-Sanders campaign will fall short of its goal and be unable to block his nomination. In that event, however, as the price of not sabotaging his campaign, the Democratic Party would demand such far-reaching concessions on program, personnel and policy that a Sanders administration would mean a Sanders fig leaf for the continued domination of Wall Street and the military-intelligence apparatus.

And large sections of the Democratic Party would balk at any such arrangement. They fear that the nomination of a candidate who calls himself a “democratic socialist” could encourage the entry into American political life of broad layers of working people and youth who have been excluded by the corporate-controlled two-party system. Every presidential candidate nominated by the Democratic Party for the last 44 years has been right-wing. Given a choice between Sanders’ left phraseology and Trump, much of the Democratic leadership will choose Trump.

Sanders understands this full well, but he nonetheless presents himself as the most loyal of Democrats. While the Democratic Party plots his downfall, he commits himself to mobilize his supporters behind whomever is chosen by the Democratic convention in Milwaukee, even the billionaire Bloomberg, just as he did in 2016 with Hillary Clinton.

The Socialist Equality Party again insists that it is necessary to develop an independent movement of the working class to advance the broadly felt popular opposition to the Democratic and Republican parties.

Bloomberg’s billions and the politics of oligarchy
[17 February 2020]