The US Justice Department announced on February 26 that the FBI and local law enforcement had arrested four “racially motivated violent extremists” in cities across the country and charged them with conspiracy. The press release said that the arrests and searches were “coordinated by the Department of Justice’s National Security Division and the U.S. Attorney’s Offices in Seattle, Tampa, Houston, and Phoenix.” 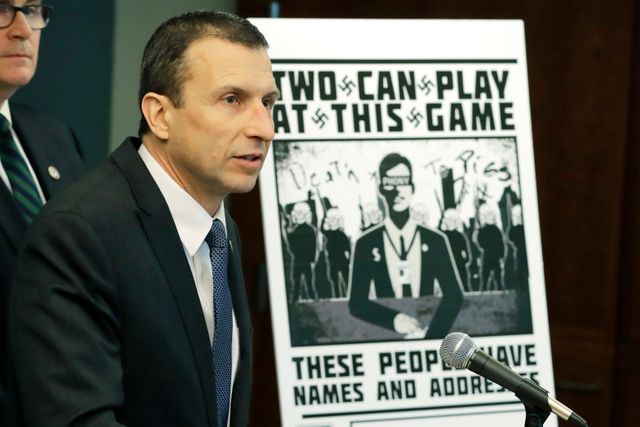 FBI Special Agent in Charge in Seattle, Raymond Duda, announcing the charges a against the members of Atomwaffen Division on February 26 [Photo credit: Ted S. Warren/AP]

Assistant Attorney General for National Security, John C. Demers said that the defendants allegedly conspired on the internet to “intimidate journalists and activists with whom they disagreed.” The four individuals were identified as Cameron Brandon Shea, 24, of Redmond, Washington; Kaleb Cole, 24, of Montgomery, Texas; Taylor Ashley Parker-Dipeppe, 20, of Spring Hill, Florida, and Johnny Roman Garza, 20, of Queen Creek, Arizona.

A fifth individual, John Cameron Denton, 26, of Montgomery, Texas, was also arrested and charged by the US Court in the Eastern District of Virginia with conspiracy for his participation in multiple “swatting” events that occurred between November 2018 and April 2019. The DOJ defines swatting as “a harassment tactic that involves deceiving dispatchers into believing that a person or persons are in imminent danger of death or bodily harm and causing the dispatchers to send police and emergency services to an unwitting third party’s address.”

It is significant that although all five men had known direct activities as members or recruiters for the neo-Nazi Atomwaffen Division (AWD) and Denton is identified as a “former leader of the white supremacist group,” the DOJ press releases do not use the words fascist or neo-Nazi to describe their politics. Atomwaffen is a German phrase for “atomic weapons.”

As reported previously on the World Socialist Web Site, AWD is a neo-Nazi group with an apocalyptic worldview originally established in the US in 2015. The group’s membership—which identifies with Adolf Hitler, wears swastikas, espouses anti-Semitism and advocates for race war—has expanded over the past five years, attracting supporters in the UK, Canada and the Baltic States.

The complaint against the white supremacists charges the men with a series of criminal activities that are “focused primarily on those who are Jewish or journalists of color.” Two of the defendants, Cole and Shea, created posters with, “Nazi symbols, masked figures with guns and Molotov cocktails, and threatening language.” The posters were sent electronically to Atomwaffen members and “the coconspirators printed and delivered or mailed the posters to journalists or activists the group was targeting.”

In Seattle, the posters were mailed to a TV journalist who had reported on the activities of AWD as well as two individuals involved with the Anti-Defamation League. The DOJ release says, “In Tampa, the group targeted a journalist, but delivered the poster to the wrong address. In Phoenix, the poster was delivered to a magazine journalist.” All of the posters delivered to journalists and others contained the phrases, “You have been visited by your local Nazis,” and “Your actions have consequences.”

The coordinated activity by AWD to harass their opponents—which they called Operation Erste Säule (a German phrase meaning “first pillar”)—was monitored closely by the FBI on the organization’s chats on the Wire platform. The federal complaint contains extensive transcripts of the exchanges by the AWD members in a private Wire chat group. The complaint says, “Based on a review of the group’s Wire chats, Cole and Shea were the primary organizers of Operation Erste Säule.”

In the case of Denton, the DOJ alleges that he “conducted three swatting calls that occurred here in the Eastern District of Virginia: a Cabinet official living in Northern Virginia on Jan. 27, 2019; Old Dominion University on Nov. 29, 2018; and Alfred Street Baptist Church on Nov. 3, 2018.” According to news reports based on comments from an unnamed source, the Cabinet official is Kirstjen Nielsen, then the secretary of homeland security, who was “swatted” at her home in January 2019.

Denton, who unknowingly discussed his harassment activities with an undercover FBI agent, is said to have “used a voice changer when he made swatting calls, and allegedly admitted that he swatted the offices of ProPublica and the investigative journalist.” FBI agent Jonathan Myles Lund wrote in an affidavit that “Denton said that if he was ‘raided’ for swatting ProPublica then it would be good for Atomwaffen Division because the swatting would be seen as a top-tier crime.”

Last fall, Cole was forced to surrender his cache of firearms in Seattle, Washington under the provisions of the state’s Extreme Risk Protection Order (ERPO). The “red flag law” enables government agents to seize weapons on the grounds that an individual is posing a serious threat to public safety. Since that time, Cole’s activity has been surveilled extensively by the FBI.

Another aspect of the AWD that has been downplayed by both the corporate media and the DOJ is the presence of these fascists in the US armed forces. The first public announcement of the existence of AWD was made in October 2015 by Branden Russell on an online forum called Iron March that was popular with neo-Nazis. Russell, who was a member of the Florida National Guard, was sentenced in 2018 to five years in prison for stockpiling explosives.

Neo-Nazi networks exposed across US military
[4 May 2019]