In an alarming development that underscores the risk of a major virus outbreak in Australia, two doctors and a staff worker employed at three large public hospitals in Sydney are now confirmed as suffering from COVID-19—the infection caused by the coronavirus that was first identified in the Chinese city of Wuhan last December.

The two doctors in Sydney, employed at Ryde Hospital in the city’s north and Liverpool Hospital in the south-western suburbs, had not travelled recently and do not have any known contact with an infected person. They had both attended a radiology seminar on February 18 with 77 other doctors and health professionals, raising the concerning possibility that the event was where they had been exposed to the coronavirus. Health officials, however, announced today that none of the other seminar participants are infected.

Eighty-four doctors and nurses from Ryde and Liverpool hospitals who spent more than 15 minutes in close proximity to their infected colleagues have been ordered to go into isolation and undergo testing. Sixty-one patients who were treated by them have also been instructed to self-isolate and be tested. 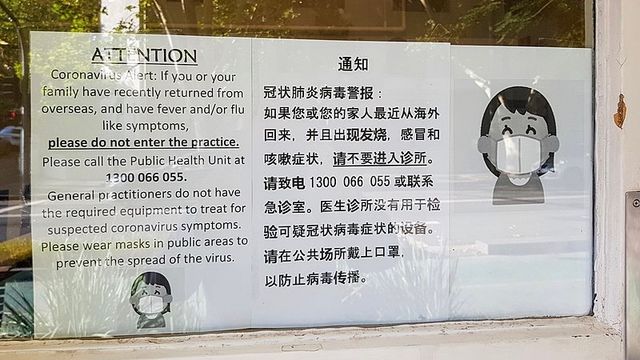 A warning outside a medical centre in Sydney, Australia due to the outbreak of the coronavirus. (Wikipedia Commons)

Today, a woman employed at Canterbury Hospital in Sydney’s inner west was diagnosed. She appears to have contracted the virus during a recent visit to Iran and worked two shifts before falling ill. At least 28 staff and three patients with whom she had contact have been placed into isolation.

Epping Boys High School, with close to 1,200 students and up to 100 teachers and other employees, was shut down yesterday after a 16-year-old who has been hospitalised tested positive to the virus. The boy’s mother works at Ryde Hospital and had contact with the infected doctor, but she is not infected herself. All staff and students have been instructed to “self-isolate” over the weekend.

A lecturer at the nearby Macquarie University returned infected from Iran in February. Management have issued assurances that he did not come to the university or have contact with other staff or students. People with whom he did have contact are being tested.

On Tuesday, a 95-year-old woman infected with COVID-19 died at an aged care centre in Ryde. A worker at the facility is believed to have contracted the virus in Iran and passed it to at least three residents. The centre has been placed under lockdown and dozens of children from a nearby preschool who visited it recently are being tested.

The aged care centre death was the second known fatality from the virus in Australia. A 78-year-old man who was infected on the Diamond Princess cruise liner died on Sunday in Perth, Western Australia.

Across the country, there are currently 61 confirmed cases of COVID-19—a figure that reflects the fact that large numbers of people have simply not been tested. Just 10,000 tests have been carried out, overwhelmingly on people who recently returned from visits to China.

The cases that have emerged over the past week leave little doubt that people unknowingly carrying the virus have been working and interacting with others in Sydney and other major cities for weeks now. Of greatest concern is the fact that, in several cases, there is no clear indications of how people became infected.

New South Wales Health Minister Brad Hazzard admitted at a press conference yesterday: “I think at this point it’s fair to say that an evolution is happening in the spread of this virus. We are doing everything we can to try and contain it. But we also know that containment is an unlikely outcome.”

The prospect of a spike in infections exists in other states as well. In Brisbane, the capital of Queensland, 15 staff who worked in the emergency department of the private Mater Hospital have been told to go into isolation because they came into unprotected contact with a sick Chinese student studying at the University of Queensland who has been confirmed as COVID-19 positive.

The student’s case highlights the global dangers of the new coronavirus strain, due to the length of time that can seemingly pass before an infected person feels ill and displays symptoms. He had spent two weeks in Dubai to comply with Australian government bans on entry into the country for anyone who had been in mainland China in the past 14 days. He flew into Brisbane from the Middle East on February 23. He sought medical care two days later—well over two weeks after apparently contracting the virus in China.

People who had contact with him, including those on his flight to Australia, are now being contacted to be tested.

Frustration and anger are rising over the lack of pre-emptive action by federal and state governments since the World Health Organisation declared COVID-19 a global health emergency on January 30. Apart from the travel ban on people coming from China, little was done to prepare for the possibility of widespread infections, such as the roll-out of mass testing services and providing all health and emergency workers with appropriate protective gear and insisting it was worn.

The head of the Australian Medical Association, Doctor Tony Bartone, told the Guardian: “I have had many examples of doctors who are worried and concerned. They are worried that personal protective equipment is in short supply.… People are concerned about a lack of preparedness and capacity. Doctors need clear messaging about what’s expected of them.”

A general practitioner who was interviewed by the newspaper bluntly stated: “I don’t know of any GP practices that would be capable of testing or seeing a suspected case. In our practice we have four consult rooms plus a procedure room. We’d have to dedicate one room as an isolation room. And then you’d have to clean and disinfect the room—logistically it’s just impossible for several reasons, including that we don’t have the physical space.”

Public hospital doctors have noted that they lack sufficient beds and equipment to address the developing crisis. For decades, Labor and Liberal governments have slashed healthcare spending as part of a broader assault on social services.

Government ministers and officials are amplifying anxiety by repeatedly stating that they expect “millions” of infections—implying tens of thousands of deaths, particularly among the elderly. In the latest example, Chief Medical Officer Brendan Murphy told a press conference yesterday that the government of Prime Minister Scott Morrison was preparing for scenarios “from the most benign through to some millions of people being infected over a period of several weeks.”

People’s lack of confidence that the authorities will competently manage a serious crisis is being expressed in the form of panic buying of essential items and long-life food products. One of the largest supermarket chains, Woolworths, has now announced a ration on the amount of toilet paper and rice that a person can purchase, as shelves are being emptied within hours of opening each day.

The main preparation being made by the federal and state governments for a mass outbreak are plans to impose draconian restrictions on peoples’ movements, close schools and universities and order the cancellation of public events and gatherings. A growing number of companies with offices in Sydney are instructing their staff to work from home where possible and suspend any overseas corporate travel.

The impact of economic and social activity grinding to a halt will be greatest on the lowest paid sections of the working class. Over 2.6 million workers are employed on casual terms, especially in the hospitality and retail sectors that are being affected by a slump in tourism and domestic consumer spending. They have no paid sick leave or holiday entitlements and employers scaling back their operations can simply not offer them shifts, without having to go through a process of formally laying them off.