Computer modeling can assist in efforts against the Covid-19 pandemic

Globally, the number of known Covid-19 cases is approaching 100,000, while the death rate has exceeded 3,000 cases, with more than 80 countries reporting an incidence of the infection.

The majority of the new cases are occurring outside of mainland China. Europe and the US are experiencing acceleration in the number of cases with now 11 deaths in the US with 149 confirmed cases indicating, as in Iran, a larger, and as of yet, undiagnosed health care crisis.

The global lack of preparedness, despite repeated warnings by the World Health Organization and experts in pandemics, shows that the recommendations had been largely ignored. But as clusters of infections in Iran, South Korea and Italy captured attention, the worldwide reaction has turned to panic as the international magnitude of the outbreak became tangible.

A study published during the early phase of the pandemic on January 31, 2020, provided a new modeling-based estimate that placed the number of individuals infected in Wuhan city at 75,800. The authors cautioned that with the lack of accurate records and timelines to include confirmed cases and close contacts, the accuracy of the estimate and the potential for pandemic remained unclear. However, the estimate has turned out to be quite accurate and prescient. 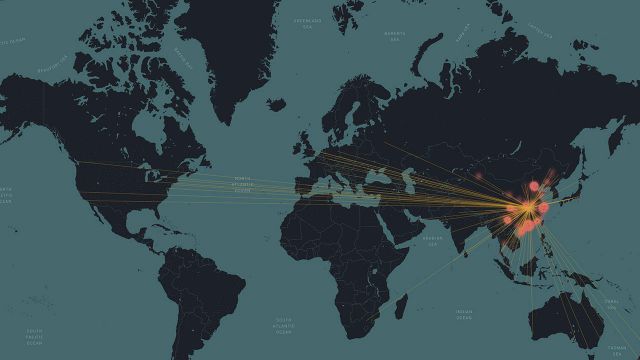 A computer generated model predicting the spread of the coronavirus. (Credit: EpiRisk)

One recommendation that was made, whose importance became evident later, was that if “substantial public health control measures to prevent large epidemics in areas outside Wuhan” were undertaken, then “the growth rate and size of local epidemics in all cities across China could be reduced.”

China was criticized for unprecedented quarantine measures, but, as the WHO later declared, these efforts proved effective. Chinese case rates and death rates have declined below the figures when President Xi Jinping declared a national emergency.

According to Dr. Gabriel Leung, author of the study, “based on our estimates, we would strongly urge authorities worldwide that preparedness plans and mitigation interventions should be readied for quick deployment, including securing supplies of test reagents, drugs, personal protective equipment, hospital supplies, and above all human resources, especially in cities with close ties with Wuhan and other major Chinese cities.”

Over the last two decades, new tools, including computer modeling of epidemics, have been employed to track Ebola epidemics, the Zika virus outbreak, H1N1 swine flu and annual seasonal flus. Mathematical and statistical modeling has aided in targeting outbreak response and allocating necessary resources and appropriate community efforts to mitigate the impact of the outbreak (school closures, social distancing, etc.).

Obtaining the data from nationally-based public health agencies to incorporate into the computer modeling, however, has been fraught with frustrations on the part of scientists. They have cited difficulties functioning in a collaborative sense with legal and ethical restrictions imposed on creating a complex communicative environment where data sharing is allowed and encouraged. Academic secrecy, fear of surveillance, and security concerns pose immense restrictions that have to be combated each time.

Several US and Canadian scientific teams who modeled the 2019-nCoV outbreak have offered multiple estimates with considerable variations that range from 500,000 to over 4 million potential cases in Hubei province. The key variables that epidemiologists use to predict the course of an epidemic are also utilized by computer modelers to provide best estimates. The forecasts are predicated on factors such as government response, population density, infectivity of the contagion, etc. The credibility of the data allows for more precise predictions.

Infectious disease modelers have quantitatively improved their approximations over the last decade. According to physicist Dr. Alessandro Vespignani of Northeastern University, best known for his work on the application of network theory to the spread of disease, specifically on the Zika virus, “year by year there have been improvements in forecasting models and the way they are combined to provide forecasts.”

Much of epidemic modeling has been used for flu forecasts in the US to better predict when each seasonal outbreak will begin, peak and grow more intense. The intent is to provide important and accurate data for policy makers to institute health alerts and initiatives for communities at risk. Prior to such computational forecasts, the Center for Disease Control and Prevention (CDC) relied on data from traditional influenza surveillance systems that measured outcomes of an epidemic only after it had begun.

In a recent FluSight Challenge initiated by the CDC, a probabilistic artificial intelligence computer model developed at Los Alamos National Laboratory was able to provide the most accurate prediction of the 2018 flu season, beating out 23 other teams.

David Osthus, a statistician at Los Alamos and the developer of the computer model named Dante, said, “accurately forecasting diseases is similar to weather forecasting in that you need to feed computer models large amounts of data so they can learn trends. But it’s very different because disease spread depends on daily choices humans make in their behavior—such as travel, hand washing, riding public transportation, interactions with the healthcare system, among other things. Those are very difficult to predict.”

The premise for such modeling goes back a century to groundbreaking studies by two Scottish epidemiologists, Ross and Hudson (1915-1917). They summarized the essential components of understanding the scope of an epidemic into three components: (1) when the infected person is introduced into a community, (2) the susceptibility of those in the community to the disease, and (3) the time course of the disease within each individual.

In so far as initial modeling results are based on fixed premises, they may overestimate the possible impact of disease but function to provide health authorities a starting point for efforts to contain and mitigate the epidemic. Using the 2014-2016 Ebola epidemic as an example, in the fall of 2014, the CDC, using their Ebola Response Model, had projected that the Ebola outbreak in West Africa could reach 550,000 to 1.4 million by end of January 2015 if no additional interventions were placed into controlling the outbreak.

They published their estimates in September of 2014 with a warning that public health agencies and international communities needed to act expeditiously if they were to contain the epidemic. By March 2015, based on these concerns, 10 countries had supplied approximately $2.2 billion in funds and medical supplies to the effort.

Additionally, CDC modeling analyzed the regional spread of the Ebola virus, calculating the probable location of the next area to be affected and diverting and allocating resources accordingly. Surreptitiously, an untested Ebola vaccine was quickly resurrected and placed into an emergency clinical trial on the ground, which proved very effective.

The efforts to isolate patients, follow up on contact leads, and bring to a halt unsafe burial practices limited the total number of cases to 28,600, with 11,325 deaths. Through the implementation of Ebola treatment units and community care centers, an estimated 9,100 cases were prevented by the close of October. The interventions employed drastically reduced the initial estimates, but required the concerted efforts by an international coalition to change the course of the epidemic, whose case fatality index was greater than 40 percent.

However, lessons learned from the response noted that available data frequently contained inconsistencies that impeded time-dependent efforts on the ground. Delays in reports also made it difficult to precisely model the extent of the disease. Also, with multiple teams in place, lack of data sharing agreements led to delays in modeling projection. The predictions generated also needed to be shared with all stakeholders to include, most importantly, the public.

Modelers writing computer equations must know the number of new infections caused by an infected person and the length of time from the infected person showing symptoms to when those they infected show symptoms. These two numbers help define the growth rate of an epidemic, the basic reproduction number, which is dependent on the nature of the virus, route of transmission and other factors, like the heath and susceptibility of those at risk.

A value greater than 1 implies transmission of the disease is sustainable—in other words, the disease will not simply die out before it spreads to a wide population. For instance, the growth rate for Covid-19 was estimated at above 2, which is much higher than the seasonal flu, which is at 1.3. Clearly, it has been evident that the SARS-CoV-2 virus has in approximately three months spread to every continent except Antarctica.

However, as Antoine Allard of Laval University in Quebec noted in their publication, “the relation between R0 [the reproduction rate], the risk of an epidemic, its potential size becomes less straightforward, and sometimes counterintuitive in more realistic models. Bodies may react differently to an infection, which in turn can facilitate or inhibit the transmission of the pathogen to others. The behavioral component is also very important.”

The time to cause illness, also known as serial time, is critical, because it informs how quickly projected cases can be expected. Additionally, measures such as the quarantine that took effect in Wuhan on January 23, which included isolating patients, introduction of wearing masks in public, closing businesses, prohibiting public gatherings and self-quarantine, played a significant role in controlling the potential spread of the epidemic.

In developing a realistic model, it has become apparent that there is a fourth number that should be considered—how long someone can be infected and contagious, but not show symptoms. According to Dr. Vespignani, “When people are exposed but not infected, they tend to travel and can’t be detected. The more realistic you want your model to be, the more you should incorporate the exposed but not ill population.”

Using powerful computer analytics, the researchers at Los Alamos are employing what they call “agent-based-models.” Using estimates of tens of millions for population sizes, they simulate the hypothetical activities of individuals in such a scenario as those occurring in mainland China.

They can consider factors such as categorizing group dynamics where people of similar backgrounds are more likely to encounter others according to income, education, age and social categories such as religion. They also consider the number of commuters each day, route of travel, locations of commute, shopping habits, bus and train schedules, peak commute hours, social habits, all tracked from one second to another.

They also then take into account when authorities enforce school closures, lockdowns, travel restrictions on these models. Such complex modeling, however, requires enormous computing power, and it can take several days or weeks before results can be reported.

Such modeling of epidemics has tremendous potential for informing communities and nations on how to coordinate efforts to minimize the potential impact of a deadly outbreak. However, political malaise and inertia in the context of the organization of the globe in a nation-state system impedes efforts that must be initiated on an international front. The utter disarray and “improvisational character” of the response only highlights the bankruptcy of the capitalist nation-states who, addicted to the need for more profits for the ruling elite, continue to fail to respond to scientific warnings about threats to human life.