After years of management profiteering and asset stripping, the firm, now run by Connect Airways, a consortium including Virgin Atlantic, the Stobart group and Cyrus Capital, announced after midnight Wednesday that it ceased trading with immediate effect and that administrators had been appointed. Passengers were told not to travel to the airports after all flights were cancelled and Flybe’s 75 planes impounded. 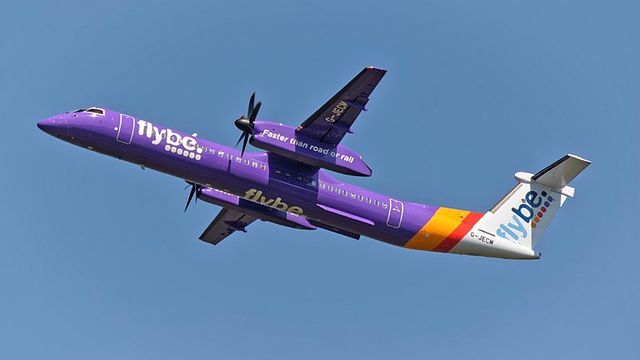 The writing was on the wall, as the Financial Times (FT) revealed Wednesday, that after months of talks with the government, the UK-based airline had failed to secure a crucial £100 million loan required to keep it going.

The firm cited subdued demand as a result of the coronavirus as the other main reason why it went under. A statement pointed to “significant funding challenges…compounded by the outbreak of coronavirus which in the last few days has resulted in a significant impact on demand.”

The FT cited a source close to the airline saying, “The impact of coronavirus has made a bad situation worse. … It has been in a pretty precarious position for a while—it doesn’t take much to push it over the edge.”

In January, Flybe secured a pledge from Boris Johnson’s government to review the Air Passenger Duty (APD) paid on each flight taking off from the UK. This was too little, too late, with the FT reporting that the company was “increasingly concerned that any cuts to air passenger duty might not kick in until 2021, which would be too late for the airline to survive the coming months.”

Staff and passengers were given virtually no warning, with Flybe sending out texts at 2 a.m. to passengers warning anyone booked on one of their flights not to travel to the airport. Flybe arranged no alternative flights. Many left stranded will be unable to recoup their fares. Only those who paid more than £100 and with a credit card can be assured of a refund under consumer protection rules.

Chaos ensued, with the airline’s final flights either grounded minutes before take-off or diverted to the nearest airport in mid-air so that planes could be impounded. Seizure notices by airport authorities were slapped on planes as soon as they landed. Flybe’s entire operation was pulled, with its website no longer operating and scenes of workers and mechanics at the Engineering HQ and workshops in Exeter lugging their tools home in the dead of night.

One passenger described how his flight from Birmingham to Glasgow was diverted to Manchester in mid-air Wednesday evening: “The passengers were very patient and a collection was done among everyone on the plane for those affected. We were patient because I think we realised a delay for us is nothing compared to potential job losses. Everyone’s thoughts are with all the Flybe staff affected.”

Katherine Densham summed up the brutal way in which staff were discarded. Speaking at Exeter Airport, Flybe’s HQ, she broke into tears as she told the Daily Mail, “I’m not sure what I’m going to do now. I’ve worked for them since leaving college.”

Most of her colleagues had also worked for the firm straight from leaving college. After working for Flybe for 13 years, she explained how “we got an email from [chief executive] Mark [Anderson] telling us it was ‘all over, it’s all gone’.”

The Civil Aviation Authority (CAA) was not commissioned by the Conservative government to operate flights to repatriate stranded travellers. The CAA claimed there was “enough capacity in the market for people to travel via alternative airlines, rail and coach operations.”

Workers also face the possible loss of their pensions. The British Regional Airlines Group (BRAG) fund is based in the Isle of Man. It is not covered by the UK’s Pension Protection Fund (PPF), which steps in to cover workers with a pension—with a 10 percent deduction in value—when firms collapse.

Transport Secretary Grant Shapps washed his hands of any responsibility, declaring, “Unfortunately, with the situation that has developed with [coronavirus], an already weak company, I’m afraid, just hasn’t been able to survive.”

In January, Flybe only survived collapse after agreeing with the government to defer tax payments of “less than £10 million” with HM Revenue and Customs as it entered talks aimed at securing the £100 million loan.

The emergency discussions followed a decade of deep financial crisis for Flybe, faced with intensifying competition. Publicly floated for £215 million in December 2010, Flybe was sold to Connect Airways for just £2.2 million in January 2019.

The company was previously sharply affected by the 2008-2009 recession, which had a disproportionate effect on the UK’s regional economies, where most of the carrier’s business is located. Domestic air traffic fell 20 percent between 2007 and 2017. Flybe reported losses of £41.1 million in 2012-2013 and began a £65 million cost-cutting programme in 2013.

After a brief period of profitability in 2013-2014, the company’s shares slumped 23 percent in January 2015 with the announcement it would only just break even that year. A drop in passenger revenue and the need to maintain surplus aircraft—nine extra Embraer jets, at a cost of £26 million—were cited as the main causes.

The situation worsened from 2017. Between then and now, nine European airlines have gone out of business. Attempts by major European carriers to dominate the market led to a price war, which crashed fellow UK airline Monarch in 2017, making 1,900 workers redundant.

Flybe continued to pile up losses, £20 million in the year 2017-2018. Following the Brexit referendum vote in 2016, the value of the pound fell sharply. With fuel and aircraft leases paid for in dollars, a 39 percent increase in fuel prices in 2019 and continuing problems of excess capacity all contributed to its demise.

Operating from 30 airports in Britain, Flybe played a central role in domestic air travel as well as in linking the UK’s regional cities to the continent. At least another 1,400 jobs will go from the businesses that supply the airline.

The loss of the airline’s UK domestic connections will have a negative effect across the whole economy. Flybe operated about 40 percent of regional UK flights, with many regional airports highly dependent on its 8.5 million passengers annually. At its Exeter hub it operated 80 percent of flights and at nearby Southampton Airport 90 percent. It ran 81 percent of all flights at Belfast City Airport in Northern Ireland.

The trade unions refused to lift a finger to oppose the devastating job losses. Oliver Richardson, national officer for the Unite union, said only, “It is simply outrageous that the government has not learned the lessons following the collapse of both Monarch and Thomas Cook that the much-promised airline insolvency review has still not materialised.”

Flybe’s long-term decline was accompanied by a massive attack on its workforce facilitated by the unions. The company shed 1,100 jobs in 2013-2014 as part of an attempted turnaround. Unite and the British Airlines Pilots Association (Balpa) worked merely to “to avoid compulsory redundancies.” Balpa’s then-general secretary, Jim McAuslan, admitted in 2014, “Pilots have made huge sacrifices to help Flybe turn a corner.”

Flybe’s bankruptcy is likely to be the first of a new wave of many smaller airlines that could go under overnight as revenues and profits disappear.

On Thursday, the International Air Transport Association said that the world’s airlines could lose between $63 billion and $113 billion in revenues because of the coronavirus crisis. Major UK- and Irish-based airlines, including British Airways, Ryanair, Virgin, in line with most of the big Asian airlines, have already cancelled up to 25 percent of flights as passenger numbers have collapsed.