The situation for refugees on the Greek-Turkish border has further worsened in the last days. More than 10,000 people are trapped in the border area, unable to move backward or forward. Greek border police and soldiers are using live ammunition to prevent refugees from entering the country. At least six refugees have been seriously injured, one Syrian refugee has even been shot dead.

The use of live ammunition is being carried out with the explicit support of the European Union (EU). Meetings of EU interior ministers in Brussels on Wednesday, and EU foreign ministers on Thursday, reaffirmed Europe’s inhuman attitude towards the plight of the refugees.

The statement of the EU interior ministers states, “Illegal border crossings will not be tolerated. The EU member states would take ‘all necessary measures in accordance with EU and international law’ to ‘protect’ the borders against refugees.” EU Internal Affairs Commissioner Ylva Johansson added, “I am counting on the Greek government to follow suit.”

The EU is calling on the Greek government to drive back the refugees with all its might, and is putting this call into practice by having border police and border guards shoot at refugees.

Although the government in Athens rejects reports about the use of live ammunition at the border as “false reports,” videos circulating on the internet have been determined to be genuine and authentic by journalists. Reporter Mark Stone of Sky News confirmed a video showing injured refugees being carried away from the border wrapped in blankets. In this case alone, six refugees had been seriously injured by shots in the chest, head, legs and groin area.

The internationally renowned research agency Forensic Architecture, which is affiliated with London University and has investigated, among other things, the fire at London’s Grenfell Tower and the murder of Halit Yozgat in Kassel by the neo-Nazi National Socialist Underground (NSU), also confirmed the murder of refugee Muhammad Al-Arab.

A video shows the 22-year-old from Aleppo, Syria, who was fatally hit with rubber bullets fired by border police on the border river Evros, being carried away bleeding heavily from his head. The Greek government has so far refused to investigate these incidents.

Moreover, Greek police do not use “normal” tear gas grenades when seeking to expel refugees at border crossings, but instead use cartridges with a tip. A photo from the investigative website Bellingcat shows a Greek border police officer loading such a bullet into his tear gas rifle. 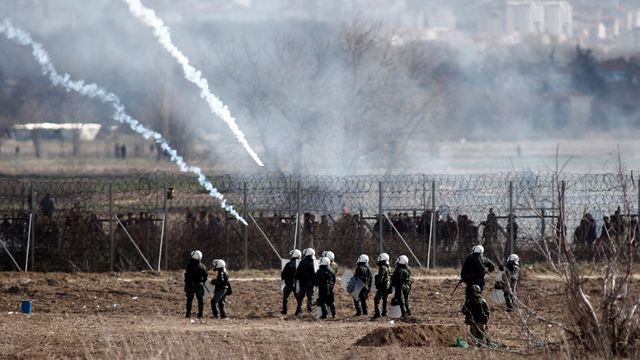 Greek police and army guard as migrants gather at a border fence on the Turkish side, during clashes at the Greek-Turkish border in Kastanies, Evros region, on Saturday, March 7, 2020. (AP Photo/Giannis Papanikos)

According to Bellingcat, “normal tear gas grenades have a limited range,” however, the projectiles used by the Greek police at the border have “significantly more force” and in combination with the sharp tip are “potentially lethal.” Bellingcat notes that almost identical tear gas cartridges were used against demonstrators during the recent protests and riots in Iraq, injuring or even killing dozens.

Violence against refugees is increasing dramatically, not only on the land border between Greece and Turkey; in the Aegean Sea, too, refugees are being brutally prevented from landing on a Greek island.

The refugee aid initiative Alarmphone, to which refugees in the Mediterranean who are in distress at sea can turn, reports several cases that occurred between March 1 and 3, in which refugee boats were fired at or attacked and robbed by masked people. In some cases, the boats’ engines were stolen, leaving the refugees helplessly adrift at sea. Emergency forces of the EU border protection agency Frontex and the Greek coast guard did not intervene, although they were in the immediate vicinity.

The German refugee aid organization Pro-Asyl, which recently reported shots being fired at the Hungarian border, sharply criticized the use of rubber bullets and live ammunition at the Greek-Turkish border. “There are several reports that fugitives are also being shot at on the Greek border. The order to shoot is a European reality; just four years after the demands of the [far-right Alternative for Germany] AfD.” Pro-Asyl is referring to statements by the then AfD chairperson Frauke Petry, who declared in 2016 that the Federal Police must “if necessary, also use firearms” when confronting those crossing borders “illegally.”

In contrast to 2016, however, the order to shoot at European borders has become official German government policy. Foreign Minister Heiko Maas (Social Democratic Party, SPD) unreservedly supports the brutal action of the Greek police towards refugees. He told Deutschlandfunk radio, “We are assuming that all this is being done in a proportionate and also very appropriate manner, and we are also prepared to help the Greeks in this difficult situation, including with funds that we are making available.”

This support consists of an EU grant of €700 million to further strengthen border security against refugees. Seven ships, aircraft, helicopters and vehicles with thermal imaging cameras will also be made available to the Greek government. The Frontex intervention force will be transferred to the border.

Maas, who always demands compliance with international law whenever it serves German interests, also approves of the suspension of the right of asylum, which is contrary to international law, and the illegal deportations of refugees carried out by the Greek authorities.

At their meeting on Thursday evening in Zagreb, Croatia, at the insistence of the German foreign minister, EU foreign ministers increased the pressure on the Turkish government to comply with the EU-Turkey refugee agreement. The EU expects Turkey to comply with this declaration in return for financial support and to guarantee the accommodation of refugees in Turkey, Maas said.

This attitude is cynical and dishonest. Turkey has taken in a total of 3.6 million refugees from Syria, more than twice as many as all EU member states together. Moreover, the dirty deal that Chancellor Angela Merkel negotiated with Turkish President Recep Tayip Erdogan in the spring of 2016 has no legal force whatsoever, as it is not a recognised accord, but only a declaration of intent. The European Union has thus engaged the Turkish government as a stooge to prevent by force the further influx of refugees into the EU.

The insistence on this shameful deal is now creating a humanitarian disaster on the Turkish-Greek border and on the Syrian-Turkish border in the Idlib region, where hundreds of thousands of refugees are stranded and camped in makeshift tents.

Through the EU’s uncompromising and violent defence of “Fortress Europe,” refugees on the Greek-Turkish border are literally caught between a rock and a hard place. On the one hand, the Greek border police are hunting down refugees as “illegal immigrants” and shooting at them using live ammunition, on the other hand, they are prevented from returning to Turkey by special units of the Turkish police. More than 10,000 people are thus trapped in no man’s land.

The German government, which has a decisive influence on EU migration policy, has also made clear it will not deviate from its tough stance, by refusing to accept even one unaccompanied child from the catastrophically overcrowded internment camps on the Greek Aegean islands or from the Greek-Turkish border area. A motion by the Green group in the Bundestag (federal parliament), which provided for the admission of just 5,000 unaccompanied children from the Greek camps, was rigorously rejected by the grand coalition of the Christian Democrats (CDU/CSU) and Social Democrats (SPD) together with the votes of the AfD.

While the brutal offensive against refugees and all those sympathetic to refugees is supported by the governments in Berlin and Paris, and by the EU in Brussels, ever broader sections of the population are turning against this inhumane policy at the expense of defenceless people seeking help. A survey conducted by the opinion research institute Infratest dimap showed that despite all the anti-refugee propaganda against asylum seekers, half of those questioned still support the unconditional admission of refugees from Greece and Turkey.

In Athens and Thessaloniki, thousands protested against the brutal attacks on refugees at the Greek border and on the islands of Lesbos and Chios, where a fascist mob chased refugees and pushed them back into the sea, without being stopped by the police. The protesters kept chanting, “Together we can fight against exploitation, war, nationalism and racism.”

The war against refugees at Europe’s external borders is the flip side of the growing right-wing extremist terror against those with an immigrant or Jewish background, as recently seen in the fascistic terrorist attacks in Hanau and Halle. The two cannot be separated. The ruling class is pushing ahead with its policy of militarism and social cuts in order to defend its interests and wealth. In order to suppress any opposition, it openly promotes nationalism and seeks to divide the working class along ethnic lines. In this way, it is not only preparing the ground for fascist violence and dictatorship but is already putting this into practice.

Stop the war on refugees at the Greek-Turkish border!
[3 March 2020]