Mexico: AMLO’s embrace of the corrupt CTM and the threat of dictatorship

Mexican president Andrés Manuel López Obrador (AMLO) joined the Confederation of Mexican Workers (CTM) in its 84th anniversary ceremony on February 23 and, in the keynote speech, embraced this corrupt institution known for its thuggery against workers as a key part of his government’s agenda.

This embrace between AMLO and the CTM, which was welcomed by the corporate media and the Business Coordinating Council (CCE), is not merely a ceremonial gesture. After years claiming to fight for workers to free themselves from the shackles of the CTM and introducing a labor reform to ostensibly facilitate this by requiring union recognition votes, AMLO and his labor secretary, Luisa María Alcalde, seek to give a progressive gloss to the CTM, speaking not a word of its record of betrayals and thorough corruption. 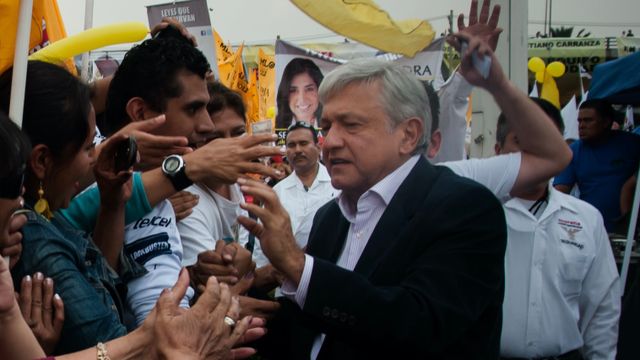 Facing a wave of mass strikes and protests and growing opposition to the traditional parties in recent years, the AMLO administration seeks to preserve the striking levels of social inequality feeding popular unrest by revitalizing the corporatist use of the trade unions, chiefly the CTM. This means suppressing any struggle by the working class for its independent interests by subordinating it politically and organizationally to the alliance of the corporations, the capitalist state and the trade unions.

While fomenting nationalist sentiments to better chain workers to the national bourgeoisie and forestall the growing support for coordinating workers’ struggles internationally, AMLO’s corporatism is entirely subordinated to foreign capital. In fact, the Trump administration dictated the terms of AMLO’s signature policy, the labor reform, in order to prevent any challenge from below to securing Mexico as a cheap labor platform—a critical piece in drawing production away from China as part of Trump’s economic war for US imperialist hegemony.

To the applause of the CTM Congress, AMLO declared:

Beyond party flags, we’ll carry out the Fourth Transformation of public life in Mexico. Regarding workers, I want to thank the trade unions and especially the CTM because we achieved, in 14 months, to increase the minimum salary twice… as an agreement between labor and employers, which I acknowledge and celebrate since today’s business people in Mexico are not exploiters or slavers as they were under the Porfiriato [1884–1911]; most business people in Mexico have a social dimension. They act with justice and humanism.

He then praised the CTM leader and Senator for the Institutional Revolutionary Party (PRI), Carlos Aceves del Olmo, ending his speech with a “Long live the CTM!” A commemorative video compiled by the CTM and Aceves himself rendered tribute to the government and committed to acting as AMLO’s “numerous, powerful and determined ally.”

Alcalde congratulated the CTM unions for including empty provisions in its statutes about new voting requirements. She explained that going through these motions will “convince workers” of the unions’ “legitimacy and transparency.” Meanwhile, the government “will keep its hands away from internal union affairs,” which means that it will generally rubber stamp any browbeating or fraud used by the CTM.

The initial stage of this process was exemplified during the 2018 wave of wildcat strikes against the CTM unions by 70,000 maquiladora workers in Matamoros, where Morena activists and politicians, as well as the “independent unions” ostensibly opposed to the CTM like Los Mineros and the Electricians Union (SME), intervened to sideline initial rank-and-file committees formed outside the control of the CTM and chain workers back to the trade unions. Significantly, workers carried out a massive march to the border with the US to call American workers to join their struggle, while many issued international appeals through the WSWS Autoworker Newsletter.

Last year, in the context of the national strike at General Motors in the United States, the company fired workers at its Silao complex in Mexico for organizing against the CTM and fighting for joint actions with GM workers in the United States against the oppressive conditions. Now, the local CTM union is carrying out vote fraud and all sorts of charades to comply with the new union recognition requirements. In another example last month, APTIV auto-parts workers in Ciudad Victoria demanding a 30 percent raise struck following the legally stipulated process until the new Federal Labor Board arbitrarily declared the action illegal and the local CTM union shut the strike down.

AMLO, Alcalde and Aceves all claimed that the CTM embodies the legacy of the Mexican Revolution (1910–20), chiefly the 1917 Constitution, and the administration of Lázaro Cárdenas (1934–40), which promoted the founding of the CTM and nationalized oil. However, contrary to AMLO’s glamorizing of Mexican capitalism today, the life for the impoverished majority is dominated by the violation of the basic social and democratic rights fought for with blood by millions of workers and peasants during the revolution against the Porfiriato.

During the Mexican Revolution, the independent interests of workers and growing support for socialism found no organized expression due to the lack of a Marxist party like the contemporaneous Bolshevik Party that led the 1917 Russian Revolution. The corrupt union leader Luis Morones and his Mexican Regional Workers Confederation (CROM) subordinated workers to one ruling faction after another of the Mexican bourgeoisie during the revolution and even drove workers into battalions to fight against the revolutionary peasant armies of Francisco Villa and Emiliano Zapata. Ultimately, the lack of a revolutionary working-class leadership resulted in the inability of Villa and Zapata to break fully with the liberal bourgeoisie and in the failure of their limited perspective based on land reform.

Opposition grew among workers in the following decades, especially as the Great Depression ravaged Mexico in the 1930s. In response, the ruling Party of the Mexican Revolution (PRM—the PRI’s predecessor) and its leader Plutarco Elías Calles handpicked the populist Lázaro Cárdenas to become president. Cárdenas in turn promoted the founding of the CTM under the leadership of the Stalinist Vicente Lombardo Toledano, who had led a reformist faction in the CROM before organizing against the “white trade unions,” the same slogan used today by AMLO. The workers’ movement peaked with a wave of wildcat strikes in 1937, led by oil and railway workers. Cárdenas successfully maneuvered to suppress these struggles with the help of the CTM by nationalizing oil and the railroads, with the benefits channeled to the national bourgeoisie.

In 1938, Leon Trotsky, who was living in exile in Coyoacán, explained:

But even at that time in Mexico, he added, the bourgeoisie was “absolutely incapable of developing democratic rule” due to its fear that too many concessions would open the door for socialist revolution.

War production during World War II, the post-war boom and especially the globalization of finance and supply chains and the formation of the North American trading bloc in the 1980s and 1990s bound the interests of the Mexican elite and its new billionaires to foreign finance and foreign markets, under the tutelage economically and militarily of US imperialism.

This evolution, reproduced in different forms across the world, turned the CTM and all trade unions into industrial police to enforce concessions from workers to the corporations and the state. Under globalization, social reforms and any significant improvement to workers’ living standards would fatally undermine the profit interests of the Mexican ruling class, leading to capital flight and the direct intervention of imperialism. Consequently, unlike the times described by Trotsky in which the bourgeoisie could use limited social reforms to its benefit, the only response available to social unrest today is a sharp turn toward dictatorship and fascism.

The chief immediate challenges for AMLO’s government were the brewing rank-and-file rebellion against the CTM and opposition to the military and its so-called “war on drugs.” Recent developments have revealed that what is being proposed as an alternative to the CTM is a so-called “independent” trade union vetted by the US corporations, along with the Mexican and US authorities. At the same time, AMLO created a National Guard and enshrined its activities in the Constitution to provide a new façade for the same military leadership and expand domestic military operations.

However, after Mexico’s first annual economic contraction since 2009, and with the falling popularity of AMLO, the ruling class is scrambling to prevent the slightest disruption to the demands of the transnational corporations and Wall Street. This has pushed AMLO to directly promote the CTM.

The dangers raised by AMLO’s program in the service of imperialism cannot be understated if workers don’t break free from his political influence and capitalist institutions like the trade unions. Workers need to build rank-and-file committees independently of the trade union apparatus and develop a political leadership based upon a socialist and internationalist program, that is, a section of the International Committee of the Fourth International.