Fiat Chrysler management acknowledged Thursday morning that a worker at its Kokomo Transmission Plant (KTP) in Indiana recently tested positive for the novel coronavirus. Although the infected worker came in contact with an unknown number of other workers at the 4,000-employee factory, FCA is continuing production despite the ongoing health risk.

According to a press release Thursday morning, the worker is now in isolation and being treated for COVID-19. “Consistent with CDC guidelines and the company’s own protocols,” FCA spokeswoman Jodi Tinson wrote, “the company has placed into home quarantine his immediate co-workers and others in the facility he may have come into direct contact with.” She added that FCA also “deep cleaned and disinfected his working area and is deploying additional sanitation measures across the entire facility, retiming break times to avoid crowding and deploying social spacing.”

Fiat Chrysler workers dismissed the company’s response. “Unless they sprayed down the whole area two weeks ago, while the worker was contagious and the virus was incubating, cleaning up now won’t help anybody,” a KTP worker told the World Socialist Web Site. “They didn’t even tell us about it, and I believe they knew two days ago. It was business as usual.”

Another Kokomo worker said, “All they are telling us is to wash our hands and take precautions. They don’t want to shut this plant down. Everything else is being closed: the NBA, Major League Baseball, March Madness. But they are keeping us working. It’s a crime. The virus is already airborne in the plant. That’s 4,000 people who are going to restaurants, gas stations and other places. It’s going to spread.” 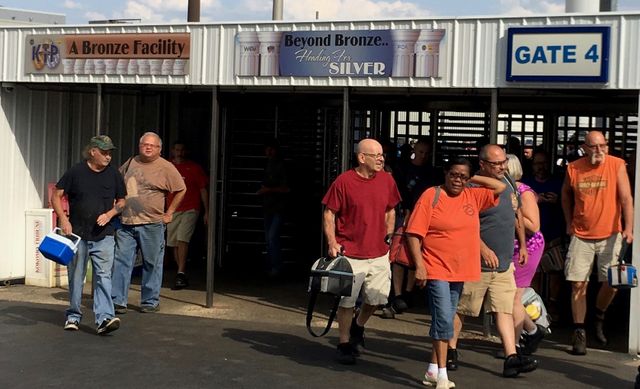 Workers at the Kokomo Transmission Plant in 2018

This the first reported case of the pandemic reaching the auto industry in the US. Fiat Chrysler temporarily closed four plants in Italy on Wednesday, long after the deadly virus had already swept throughout the country, resulting in what is currently more than 1,000 deaths. With the country’s medical system overwhelmed and most of Italy already in lockdown, FCA announced the temporary suspension of production—but quickly assured investors the plants would be reopened after two or three days and there would be no impact on overall production rates.

Indiana Governor Eric Holcomb announced a ban on all “non-essential” gatherings larger than 250 people statewide—an order which exempts workplaces. A similar ban was carried out in Ohio yesterday after the state government announced that over 100,000 state residents were likely already infected. But auto factories throughout the Buckeye State, including the massive Toledo Jeep plant which employs nearly 7,000 people, are continuing to operate at normal capacity.

This is threatening the lives of thousands of autoworkers. “We have confirmation that at least four workers in the Tipton plant were taken out of the plant last night with possible coronavirus,” a worker at FCA’s Tipton Transmission plant, 15 miles from Kokomo, told the WSWS. “Our plant nurse is refusing to come out from behind her glass doors and telling workers to go home or go to the ER. They are not doing anything here to stop or prevent anybody else getting sick. This is exactly what our BS international union and this company really think about workers. They don’t give a damn about any one of us or our families.”

According to the United Auto Workers union, the infected Kokomo worker was a salaried employee and a member of the UAW. In a statement Thursday, UAW Vice President Cindy Estrada made it clear the union would not demand the closure of the plant or any other serious measures to protect the health and safety of workers.

“We are working with FCA on this first discovery of the virus at one of their facilities as well as on the precautions and measures necessary to protect our UAW FCA members and everyone who works in our facilities.” She added, “As a reminder to help do our part in this pandemic, we encourage all UAW members and others to wash hands frequently, use hand sanitizer frequently, avoid touching the face and avoid contact with others within 2 to 3 feet, if possible. Anyone experiencing symptoms of a high fever, dry cough or illness, should take precaution and stay home.”

Workers responded to the UAW’s comments with contempt. “You can’t separate workers on the assembly line. The World Health Organization says six feet is the minimum, in any case. But workers share the cafeterias, bathrooms, labs, offices, entry gates and entry/exit door areas.

“With the number of individual workers and management people coming in contact with others while being stationary or traveling all over the plant, it’s impossible to separate people. Assembly has jobs that rotate and can be a handful of people in a 12 foot by 12 foot area and supervisory workers crammed into small offices where desks are stacked on top of one another.”

Later Thursday evening UAW International President Rory Gamble issued another statement, which was a slightly modified rehash of Estrada’s statement about “actively monitoring and reacting to issues related to the spread of COVID-19.” His chief concern, however, was not with rank-and-file workers but his fellow union executives.

“Out of an abundance of caution,” Gamble said, “we have asked some staff that were in Kokomo to work from home and quarantine. None of our Solidarity House personnel were directly exposed, but some may have had exposure to co-workers. None of our Solidarity House employees exhibited any symptoms related to Coronavirus.” Unable to conceal his contempt for workers, he concluded, “There will undoubtedly be more members and co-workers that are impacted” and warned about “spreading rumors,” a euphemism for workers communicating with each other and collectively taking action to protect their lives.

But this is exactly what workers must do. In opposition to the UAW, which has been described as a FCA-controlled enterprise by federal investigators for taking bribes from company officials, workers should organize rank-and-file factory committees and demand the immediate closure of all workplaces, with full compensation for lost time. At the same time workers must demand that the most advanced medical care be made available to everyone, regardless of income or insurance coverage, and the elimination of all co-pays, premiums and other costs.

The decision to keep the factories open is not being made by medical experts but corporate executives for the sole purpose of boosting shareholder returns, regardless of how many autoworkers will die.

In this regard, the infamous remarks by another auto executive should not be forgotten. In 2005, Steve Miller (Ford, Chrysler and Delphi), said, “Back in the days when you worked for one employer till age 65 and then died at age 70, and when health care was unsophisticated and inexpensive, the social contract inherent in defined-benefit programs (company-paid pensions and health care benefits) perhaps made some economic sense.” People “are living longer these days,” he complained, and “medical science is rapidly expanding the capability to spend vast amounts of money keeping you alive for decades. Of course, that is a good thing. But the question is, how can we afford it?”

There can be no doubt that within corporate boardrooms, the outbreak of the coronavirus pandemic is seen as a way of dispensing with large numbers of “legacy” workers whose pensions and benefits they consider an unacceptable deduction from their profits. This is also true for the UAW, which controls a multi-billion-dollar retiree health benefit trust. The quicker autoworkers die, the more that is left for the corrupt UAW money managers to pocket.

“They are putting product before health and safety,” a young worker at FCA’s Sterling Heights Assembly Plant in suburban Detroit told the WSWS, “It’s like we’re second-rate citizens. The UAW is under-informing us so they can take advantage of our ignorance.”

Pointing to the broader issues, a veteran Kokomo worker said, “It speaks volumes about how fragile and ill-prepared the system is to combat any natural or unnatural disaster. In short our government leaders are promoting and profiting from a capitalist system that is disastrous for the masses.”