Plans are in place for the extensive domestic deployment of British army soldiers during the next months—possibly within 20 days.

A senior army source said, “From tomorrow [Monday] we’ll be working with regional authorities to reassure them we’ll be able to help … We are told this virus will peak in three to five weeks and that will be a critical time for hospitals, prisons, public services and people across communities who will need reassurance that they can still get food and water.”

Sources in the Department of Defence told the Mail on Sunday that troops trained in chemical, biological and nuclear warfare will deep-clean empty public buildings in the event that they need to be turned into hospitals or morgues. The Royal Army Medical Corps is preparing to build tented field hospitals near care homes and army hospitals will be used to add capacity to the National Health Service (NHS). Soldiers may also be drafted into the three emergency services (police, fire and emergency medical service) to replace workers in isolation or who have fallen ill. 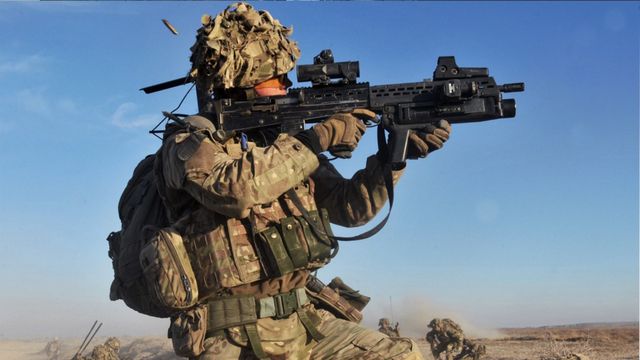 A soldier with the 4th Mechanised Brigade is pictured engaging the enemy during Operation Qalb in Helmand, Afghanistan.

Under Operation Rescript, Lieutenant-General Tyrone Urch has been made responsible for contingency plans to stock supermarkets and refill petrol stations. The Royal Logistics Corps is being prepared to escort food convoys. At least hundreds and potentially thousands of troops will be involved.

The turn to the military is a mark of the total collapse of resources available to public authorities to respond to a crisis, after decades of private looting and central government cuts. Whether in the case of the Australian wildfires or of a global pandemic, the ruling class views every social problem as a military-police problem.

Of more serious concern still, the army is being called upon to play a frontline role in policing.

Soldiers are reportedly “stepping up” their training for public order roles, which will include “guarding” hospitals and supermarkets. Thirty-eight military liaison officers will coordinate with local councils over the deployment and use of military forces and the Royal Military Police will work with local police forces and prison officers.

The police are also being given powers to “detain and direct individuals in quarantined areas at risk or suspected of having the virus” to halt “any vehicle, train, vessel or aircraft” and close ports if immigration officers are forced to stop work. The elite SAS special forces stand-by squadron is set to be held in the UK rather than deployed abroad.

These deployments are being justified with references, taken from the tabloid press, to “staggering trail[s] of destruction” at supermarkets, with “shelves cleared like a riot.”

Having failed to make proactive preparations for the onset of the virus, the government is seeking to accuse the general population of irresponsibility. The same implication is behind the excuse that quarantines and closures cannot be implemented “too early” in case people grow tired of restrictions and begin to ignore them before the peak of the epidemic is reached.

Claims that shops are threatened with riots are almost entirely based on a single photo taken at a Tesco supermarket in north London, which shows one aisle with empty boxes and some canned goods piled on the floor.

Whatever role the military might have in providing logistical support to the health care services, its involvement in law enforcement is a grave warning to the working class.

Moves to deploy troops on the streets did not begin with the outbreak of the coronavirus. A significant element of the government’s Brexit preparations was Operation Yellowhammer. The secretive policy involved plans for the deployment of thousands of riot police and soldiers to deal with “civil unrest”—up to 50,000 regular and reserve troops, backed up by 10,000 riot police.

Discussions were also held among senior civil servants about the use of the Civil Contingencies Act 2004, introduced by the Labour government of Tony Blair. Powers under this act include curfews, bans on travel, confiscation of property, the deployment of the armed forces to quell rioting, and enabling ministers to amend any act of Parliament, except the Human Rights Act, for a maximum of 21 days.

These police-state measures were directed against a potential mass movement of the working class in response to the economic disruption of Britain’s exit from the European Union. The codename “Yellowhammer” was widely believed to have been given in reference to the yellow vest protests swelling in France at the time and cracked down on with savage repression by the French state. Heavily armed riot police and soldiers have since maintained a major presence in large French cities.

The same concerns are alive in the ruling class today. They have been heightened by the pandemic’s exposure of the rottenness of world capitalism and the mass opposition this is beginning to generate. The ruling elite operates on the premise “never let a crisis go to waste,” and will use this situation to introduce more permanent military deployments and normalise emergency powers.

The coronavirus crisis cannot be left in the hands of the capitalist class. Conducting an effective, global response to the pandemic while respecting human dignity and preserving democratic rights requires the independent mobilisation of the international working class.