This week in history: March 30-April 5 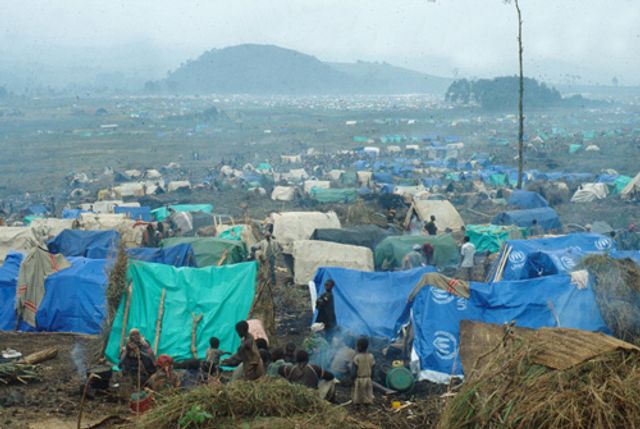 A refugee camp for Rwandans in Zaire, 1994

On April 5, 1995, a massacre began in a refugee camp in Gasorwe in northeastern Burundi. It was the worst single incident of violence that week in the region’s ethnic Hutu-Tutsi violence. Limited and differing reports counted the death toll between 150 and over 400. Hutu villagers were shot, slashed, and clubbed to death by militants, based on their ethnicity. In nearby villages, Tutsis were murdered by armed Hutu groups. Many were Rwandan refugees fleeing genocide only to meet their deaths in refugee camps.

The last week of March and first week of April saw massive violence break out throughout the region. Hundreds of Hutu, mostly women and children, were reportedly massacred. Survivors claimed that the attackers were wearing army uniforms. Burundi’s military was dominated by the Tutsi, a minority that made up approximately 15 percent of the population. Burundian President Sylvestre Ntibantunganya, a Hutu, told the press that the Tutsi-led army was there to protect the people, and denied it was attacking Hutus.

In neighboring Rwanda the previous April, the death of Hutu President Cyprien Ntaryamira in a plane crash set off a bloodbath which resulted in the deaths of some 500,000 people, mostly Tutsi. Rumors of renewed violence in Burundi, where fighting left 100,000 dead in 1993, drove tens of thousands of Hutu refugees in northern Burundi to flee toward Tanzania, which closed its borders to them.

One of the major sources of tension was the food shortage in refugee camps operated by the United Nations. As many as three million people were dependent on supplies delivered by the UN and private relief organizations in Rwanda, Burundi, Zaire and Tanzania. In mid-March of 1995, the World Food Program reported that $385 million was needed in food and operating expenses for Rwanda and Burundi, but that only $155 million had been pledged. Because of acute shortages, the UN planned to cut all food to the displaced Tutsi people by the middle of April but to continue to distribute to Hutu refugees, which further fueled tensions.

The bloody violence in the region was the legacy of colonial rule, under which tensions between the Tutsi and the Hutu were deliberately exacerbated by the European imperialists. 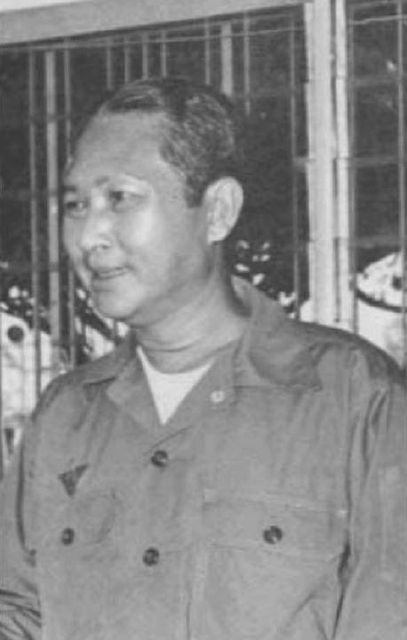 This week in 1970 fighting intensified in Cambodia that would soon draw both the United States and North Vietnam into the conflict. The escalation came as the result of a US-backed coup on March 18, 1970 that had placed Lon Nol as head of the newly declared Khmer Republic and ousted the monarch, Prince Norodom Sihanouk. The Sihanouk government had declared itself neutral in the Vietnam War and lost US favor when it turned a blind eye to the construction of North Vietnamese and National Liberation Front (NLF) secret transport routes and bases inside Cambodian territory.

In the last few days of March the Khmer Rouge, the military wing of the Cambodian Communist Party headed by Pol Pot, began preparing for a coordinated military offensive with the North Vietnamese army and the NLF to remove Lon Nol’s regime from power. On March 29 the offensive began occupying large areas of northern Cambodia.

With Cambodians flocking into the ranks of the NLF and the Khmer Rouge it quickly became clear that Lon Nol could not sustain his regime. He responded by turning to the South Vietnamese and American militaries for assistance, and by carrying out attacks on the ethnically Vietnamese population within Cambodia. Khmer Republic military forces began arresting and executing Vietnamese immigrants living in Cambodia, claiming they had assisted the NLF-Khmer Rouge offensive. At least 800 were killed in a massacre on April 15 and hundreds of thousands of Vietnamese were forced to flee Cambodia in the following months.

By the end of April, US and South Vietnamese troops mounted attacks into eastern Cambodia

While significant damage was inflicted on villages and civilians in Cambodia, the operations and bombings did little to break up the military activity in the region. These raids culminated in a full-scale US invasion of Cambodia, producing outrage in the American population, which overwhelmingly opposed the expansion of the war.

75 years ago: US military launches land invasion of Okinawa 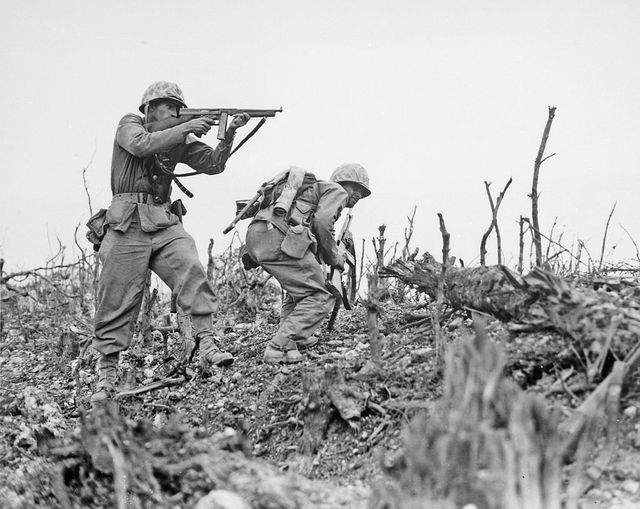 US Marines in the Battle of Okinawa

On April 1, 1945, the United States’ Tenth Army launched a land invasion of Okinawa, the small but strategically critical southern Japanese island, in one of the bloodiest engagements of the Pacific Theater in World War II. The ensuing battle would span almost three months and would claim hundreds of thousands of lives.

Planning for the invasion followed a series of US victories over Japanese forces throughout the Asia-Pacific region, including the capture of Manila, the capital of the Philippines, and the decimation of the heavily fortified Japanese military base on the island of Iwo Jima.

The Tenth Army had been established in mid-1944, in preparation for land operations against Japanese-controlled islands, including potentially Taiwan. It brought together a number of army infantry divisions and marine corps, equipped with military aircraft and purpose-built amphibious vehicles.

The land operation was preceded by a major naval bombardment, involving the US Navy’s Task Force 58 and a flotilla of British warships. This succeeded in neutralizing Japanese airfields on Okinawa and in the Sakishima Islands. On April 1, US Army and Marine Corps soldiers carried out the main landing on the island’s northern Hagushi beaches. Allied troops made rapid progress, until a Japanese army counter-offensive on April 12 initiated months of close-quarter and bloody fighting.

On April 7, a desperate attempt by the Japanese navy to obstruct the takeover of the island was decisively defeated. The Japanese imperial regime had dispatched Yamoto, then the largest battleship in the world, along with nine other warships, to attack the British and American naval forces providing support to the land invasion. The Japanese armada, travelling without any air cover, was destroyed by US aircraft before it reached its target, costing the lives of over 4,000 Japanese sailors.

Over the following three months, fighting on Okinawa resulted in between 77,000 and 110,000 Japanese military deaths. More than 12,500 US soldiers were killed, along with at least 38,000 wounded. The local population, which had an antagonistic relationship with the Japanese authorities and was unable to flee the hostilities, suffered massive losses of anywhere between 40,000 and 150,000.

100 years ago: Palestinians riot against Zionist settlers in Jerusalem 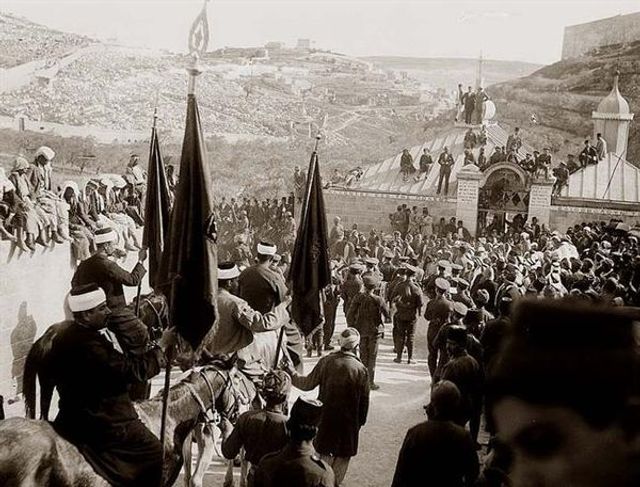 Nebi Musa procession, the day before the riots

On April 5, 1920, during the celebration of the Muslim Nebi Musa festival, tens of thousands of Palestinians who had assembled in Jerusalem for a religious procession associated with the festival listened to nationalist speeches against the British occupation government and the Zionist colonization of the region. A riot ensued with Palestinians attacking Jewish colonists, and knives and stones were used on both sides. Palestinian rioters invaded the Jewish quarter of the city and ransacked buildings.

The British army declared a curfew in the evening but the next day the riots were renewed, and the British sealed off the Old City. The riots lasted for another four days. The British eventually tried 161 Palestinians and 39 Jews for various crimes that day.

The riots came in the aftermath of the Battle of Tel Hai on March 1 when Palestinians guerillas fought armed Zionists, during which eight Jews and five Arabs were killed. Nationalist sentiment had been raised in the Palestinians population by the declaration of the first independent, though short-lived, Arab state, the Arab Kingdom of Syria, on March 7, which included the areas that make up modern Syria, Lebanon, Palestine and parts of Iraq.

Many of the local religious officials and elements in the Arab ruling class closest to the British, and, in Syria, French, imperialism expressed support for Jewish colonization.

In the aftermath of these attacks, Zionists began to arm themselves and create paramilitary organizations called Haganah, that formed the core of what became the Israeli Defense Force after 1948.