As the COVID-19 pandemic continues to spread throughout Australia, the working class is bearing the brunt of the resultant economic collapse. Tight restrictions on international and interstate travel, social gatherings, live entertainment, sporting events, and “non-essential” retail trade have resulted in mass sackings across virtually every industry.

Westpac last week predicted the pandemic would cause more than 814,000 job losses, which would bring the official unemployment rate to 11 percent by June, more than double the February figure of 5.1 percent.

In reality, the official unemployment figures vastly underestimate the number of people without secure jobs, and this distortion will only be increased as many employers demand workers accept reduced hours as a result of the economic crisis. Underemployment will also rise dramatically. 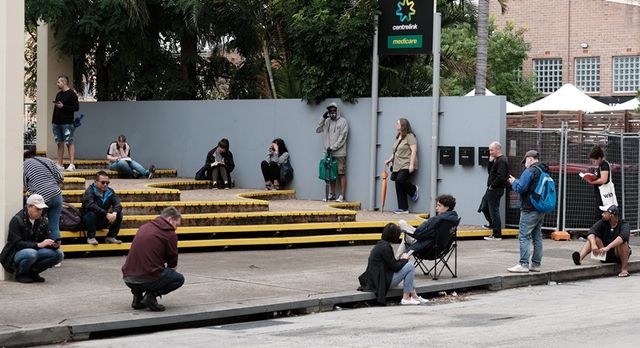 Food and beverage service workers were among the first to face the axe. Entertainment venues, bars, restaurants, cafes, and licensed clubs were forced to enforce stringent “social distancing” limits on March 16, before being shut down or reduced to takeaway service on March 23. Many of the 777,000 workers in the heavily casualised industry were immediately jobless without even the temporary safety net of paid leave or redundancy pay.

Workers in the entertainment industry have reported more than $316 million in lost income as a result of event cancellations, affecting more than 400,000 people.

The closure of gyms, fitness centres, and outdoor exercise groups across the country as a social-distancing measure resulted in more than 20,000 job losses in the exercise industry.

The three “stimulus” packages so far announced by the federal government have promised almost no support for these casual workers, who are instead being funnelled into the poverty-level Jobseeker welfare system. The wave of sackings led to the collapse of the Centrelink web site, forcing hundreds of thousands of newly unemployed workers to queue for hours outside welfare offices in scenes resembling the 1930s Great Depression.

In an attempt to forestall the mounting economic crisis, the federal government has failed to close down shopping centres, despite the major public health risk presented to workers and customers. Nonetheless, most Australians have sensibly chosen to limit their purchases to essential items or shop online, resulting in sweeping closures of retail stores.

Major department store chain Myer has announced the closure of all 60 of its stores and stood down 10,000 workers. The company’s remaining staff have been forced to take a 20 percent pay cut.

The Cotton On group of clothing brands has closed 650 stores, sacking 22,000 workers. Mosaic, which owns Noni B, Rivers, and Katies, has sacked 7,000 at its 1,300 stores. Other major retailers, including Country Road, General Pants, RM Williams, the RAG Group (Tarocash, yd., Connor), and Athlete’s Foot have followed suit, resulting in the loss of at least 23,000 jobs.

Pacific Brands, which owns Bonds, Sheridan, and Bras ’n Things, yesterday announced the immediate closure of its stores and the sacking of more than 3,000 workers.

Camping and activewear retailer Kathmandu has retrenched 2,000 retail workers in Australia and New Zealand, while its senior executive team is taking a 20 percent pay cut.

Furniture sellers Adairs and Nick Scali have shut down a combined 218 stores and laid off their retail and customer support staff.

Despite Prime Minister Scott Morrison’s insistence that hairdressers should be exempt from the closure of non-essential businesses, Australia’s largest hairdressing chain, Just Cuts, has announced the temporary closure of all 190 outlets in Australia, leaving 2,500 stylists out of a job. While the company has justified this on the basis of valid concerns about the safety of workers, the real motivation behind the shutdown is a lack of customers.

Despite this, a sharp drop-off in advertising revenue as a result of the developing economic crisis has led to cost cutting and closures throughout the industry.

Numerous independent regional newspapers have ceased publication and stood down employees. Australian Community Media is considering a temporary halt to the production of some of its 160 magazines and local newspapers.

The Murdoch-owned News Corp has seen a 21 percent increase in new subscriptions since the pandemic began. Yet the company has flagged “inevitable” job losses, forced leave, and reductions to staff hours.

Advertising company Ooh Media has compelled most of its staff to take annual leave over Easter. The Southern Cross Austereo radio network has introduced pay cuts and overtime bans, and is requiring all workers to take at least 10 days of annual leave in the next 3 months.

The suspension of Australia’s major winter sporting codes and the postponement of the Tokyo Olympic Games have made a massive dent in the projected advertising revenues of the commercial television networks, and the sports themselves.

The National Rugby League (NRL) has proposed cutting 95 percent of its staff, and players face pay cuts of up to 87 percent. Players also learned last week that the NRL has withheld $15 million from their retirement funds over the last three years.

The Australian Football League has stood down 80 percent of its staff, while players have agreed to a 50 percent pay cut for at least two months.

Football Federation Australia, the governing body of Australian soccer, has stood down 70 percent of its staff.

Australia’s tourism industry, which directly employs around 1 million workers, has been almost entirely shut down as a result of travel bans.

The majority of the 30,000 aviation industry workers at Qantas and Jetstar have been stood down, while Virgin Australia has axed 8,000 of its 10,000 employees. This comes despite a $715 million bailout of the airlines announced in mid-March.

Virgin, which yesterday went into a trading halt, is reportedly seeking a $1.4 billion loan from the government. Qantas, which last year spent half a billion dollars on share buybacks, insists that it does not need further assistance from the public purse. However, if the Virgin deal goes ahead, the company has declared that it should be loaned $4.2 billion to “level the playing field.”

Brisbane-based travel agency Flight Centre has stood down or sacked 6,000 staff, while Helloworld has announced 275 retrenchments, stood down 1,300 employees and asked the rest to work reduced hours. Corporate Travel Management will let go about 1,000 staff.

In Sydney, SeaLink Travel Group has stood down 130 ferry workers and the National Roads and Motorists’ Association, which operates the Manly Fast Ferry and Fantasea Cruising, cancelled the shifts of 50 casual employees.

So far, the construction industry has been only minimally affected by the outbreak, but economic analysts have warned that a wave of mortgage defaults and business closures are likely to result in massive cuts to the sector.

The Construction, Forestry, Maritime, Mining and Energy Union continues to insist that the construction industry must not be shut down as the effect would be “devastating to workers and the economy.” Rather than demanding that workers be immediately granted leave with full pay, they are calling for minimal safety measures: the staggering of meal breaks and a reduction to the number of workers on site.

Devastating as the financial impact of the COVID-19 pandemic will be, the Australian economy was already facing a major downturn late last year, especially in the retail sector. The rapidly developing slump will now produce enormous social hardships as the government provides tens of billions in assistance to corporations, but limited aid to working people, and businesses exploit the opportunity to accelerate restructuring.