The commander of the aircraft carrier USS Theodore Roosevelt has sent a four-page letter to his superiors appealing for the Navy to move nearly his entire crew into quarantine on the US Pacific island territory of Guam, where the vessel has docked since coronavirus infections were detected on board.

All 4,000 sailors are being tested for coronavirus—after several days of delay when only those showing symptoms were tested—and at least 100 positives were reportedly found. Sailors began reporting sick about two weeks after the aircraft carrier made a port call at Da Nang, Vietnam. At the time, there were about 100 cases of coronavirus reported in Vietnam, most of them in the Hanoi area, well north of Da Nang.

Captain Brett Crozier made an unusually emotional appeal to save the lives of his sailors, according to the text made public by the San Francisco Chronicle. “Decisive action is required. Removing the majority of personnel from a deployed U.S. nuclear aircraft carrier and isolating them for two weeks may seem like an extraordinary measure,” he told the Navy command. “We are not at war. Sailors do not need to die. If we do not act now, we are failing to properly take care of our most trusted asset—our sailors.” 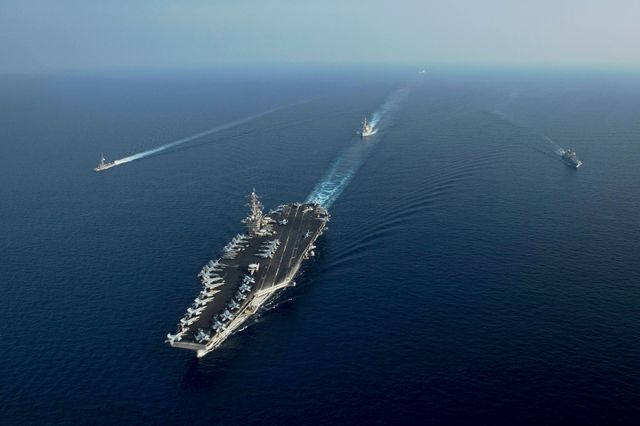 The March 30 letter proposed that 90 percent of the ship’s crew be moved into isolation on Guam, with only a few hundred left on board to monitor the carrier’s nuclear power plant, safeguard its weapons systems and perform other core functions, while the giant aircraft carrier was given a thorough and professional cleaning.

Crozier pointed out that it was impossible to practice social distancing and isolation on board the carrier. “Due to a warship’s inherent limitations of space, we are not doing this. The spread of the disease is ongoing and accelerating,” he wrote. Among these limitations were shared sleeping quarters, meal areas and bathrooms, constant movement up and down ladders and through narrow passageways, and complex work operations that require close cooperation.

He also noted that about 20 percent of those now diagnosed with the virus had initially tested negative, only to become infected and show symptoms later.

Pentagon officials confirmed that Crozier’s letter was under review and that they agreed that sailors needed to leave the ship. Acting Navy Secretary Thomas Modly told the press, “The problem is that Guam doesn’t have enough beds right now, and so we’re having to talk to the government there to see if we can get some hotel space or create some tentlike facilities there.”

Defense Secretary Mark Esper told CBS News Tuesday night that he had not yet read Crozier’s letter—which was dated Monday—but claimed “I don’t think we’re at that point” in terms of actually evacuating the ship.

The uniformed officer in overall charge, Admiral John C. Aquilino, commander of the US Pacific Fleet, said on a conference call with reporters that his top priority was the health of the sailors, but he added that no sailor had yet required hospitalization, and most were suffering only mild symptoms.

Major General Jeff Taliaferro, the vice director for operations of the Joint Chiefs of Staff, declared, amazingly, that the Roosevelt could perform its missions even with a raging pandemic aboard. If asked to sail immediately because of a national security crisis, he told the press, the ship was “ready to sail.”

The crisis on the Roosevelt is only the most acute indication of the serious impact of the COVID-19 pandemic on the operations of the American military machine. While the admirals and generals have a cavalier attitude to the lives of the rank-and-file—arguing that because they are mostly young and physically fit, they are in less danger—the virus thrives on the close quarters and constant interaction of military life on land and sea.

As of Friday, March 27, the Pentagon had tallied 613 coronavirus cases among US military personnel and stopped giving any details of the locations of outbreaks, on the grounds that this would give vital information to potential adversaries about weak spots. “Numbers of people in isolation, quarantine, or possibly infected will not be released,” read a Department of Defense memo seen by CNN.

Several urgent orders were issued, including a halt to all overseas port calls by US Navy ships, confining the 28,000 US soldiers stationed in South Korea to their barracks or homes, and halting most troop movements worldwide for 60 days, except for planned rotation of soldiers out of Afghanistan.

The US role in NATO military exercises on the Russian border of the Baltic states and Poland was scaled back to include only the 6,000 troops already dispatched to Europe, leaving 19,000 soldiers at their bases in the US.

The Department of Defense also ordered many of the 25,000 who work at the Pentagon to work from home instead. The headquarters of the Northern Command in Colorado Springs, which controls troop deployments within the United States itself, was engaged in “distributed operations,” in which command units are strictly separated and key command personnel isolated. The same regimen was being observed in NORAD, which controls the airspace over the United States and Canada.

CNN reported Monday, “Some of the most critical US senior military commanders and nuclear and special operations forces are now operating under extraordinary protection measures to ensure that in the event of a sudden security crisis, including any potential nuclear mission, there will be enough healthy troops and leaders to carry out orders as the coronavirus pandemic grows.”

The report cited specifically intercontinental ballistic missile crews, the crews of submarines carrying nuclear missiles, and the crews of B-52 bombers, the soldiers who operate the three components of the so-called nuclear triad.

Meanwhile, with none of the fanfare that accompanied the dispatch of the USNS Comfort to New York harbor, Trump on March 28 signed an order authorizing the Pentagon to activate as many as one million former service members, now enrolled in the ready reserves, for up to two years, to be called up as necessary in responding to the COVID-19 pandemic.