Clemency: A prison warden with a civil war inside her

Written and directed by Chinonye Chukwu

Clemency, from Nigerian-American writer-director Chinonye Chukwu, is a sober, hard-hitting drama about the death penalty in the US. Certain sequences are harrowing and difficult to watch, and constitute an indictment of a social order capable of organizing such barbarism.

Alfre Woodard plays Bernadine Williams, the warden of a prison in an unspecified location where inmates are executed via lethal injection. Bernadine presides over every detail of the agonizing, inhuman ordeal.

The film opens with a botched execution. The condemned man (Alex Castillo) is strapped, crucifixion-style, to a table. Bernadine nods to a health care professional who attempts to insert an IV line. When the effort fails on both arms and feet, the line is then cruelly forced into the man’s groin. The prisoner screams in pain.

Prior to the fatal drugs being administered, a curtain is drawn back, exposing the tortured man to a gallery of onlookers who will bear witness to his demise. It is a horror-provoking, surreal spectacle.

At her job, on an everyday basis, Bernadine maintains a stony, mask-like composure. But she is an insomniac, an after-work drinker and emotionally unavailable to her husband, Jonathan (Wendell Pierce), a schoolteacher—“I need a pulse,” he complains. The prison’s deputy warden (Richard Gunn) is transferring to an institution that does not carry out the death penalty.

Bernadine walks down the prison corridors as though haunted by the 12 prisoners whose executions she has presided over. Her life becomes dominated by these conflicting impulses, this raging civil war inside her.

Next in line for the needle is Anthony Woods (Aldis Hodge), an African-American man accused of shooting a police officer. Marty Lumetta (Richard Schiff), Anthony’s attorney, stubbornly maintains his client’s innocence. At one point, Bernadine listens to an audio tape offering evidence that seems to back up this contention. Marty has been Anthony’s only ray of hope in the excruciating appeals process, and has himself become worn down and morally exhausted by it.

Protests mount outside the prison walls. “I am Anthony Woods” rings out, audible to Bernadine as she sits uncomfortably in her office.

Clemency is hauntingly effective. Woodard, a fine actress, does most of the heavy lifting. Hodge, another gifted performer, is convincing both in his internal and external-physical torment. His character is a constant reminder to Bernadine and the prison authorities that they are terminating a life in crude, medieval fashion. Veteran actor Schiff is the voice of their own consciences, their own better selves, emotionally drained by the far-reaching impact of an execution. What could be worse than deliberately snuffing out a life?

At one point in Clemency, Bernadine’s husband reads a portion of the following passage from Ralph Ellison’s Invisible Man (1952): “I am an invisible man. … I am a man of substance, of flesh and bone, fiber and liquids—and I might even be said to possess a mind. I am invisible, understand, simply because people refuse to see me. Like the bodiless heads you see sometimes in circus sideshows, it is as though I have been surrounded by mirrors of hard, distorting glass. When they approach me they see only my surroundings, themselves, or figments of their imagination—indeed, everything and anything except me.” 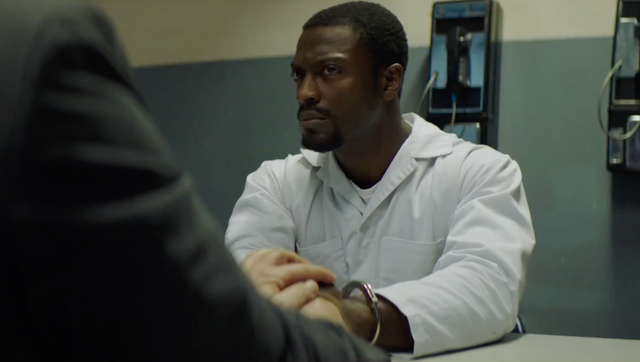 Ellison’s novel was directed specifically toward the situation of African Americans in the US. Whether Chukwu has exclusively racial connotations in mind is not clear. In any event, the “invisibility” of those condemned to die in the US, white, black and Latino, is a fact of life.

More than 1,500 men and women have been executed in the United States since the late 1970s. This, despite the fact every state, obviously including all those that carry out the death penalty, has a provision in its constitution allowing the governor to grant clemency. However, there have only been 294 clemencies since 1976. Currently, some 2,500 prisoners face execution in America.

There is increasing popular opposition to the death penalty, fueled in part by the thousands of cases of individuals who have been exonerated and released from prison on the basis of DNA and other evidence. More generally, the awareness is growing that state-sponsored murder is a stark expression of social inequality. The vast majority of those put to death of every race and ethnicity are the poor and oppressed. Conversely, the great criminals in America, including those responsible for the spread of the coronavirus pandemic, go free.

Chukwu has explained the impetus for the film was provided by the execution of Troy Davis in Georgia in 2011, a case that aroused widespread, global protest. Davis, who suffered 22 years on death row, was accused—like Woods in Clemency—of shooting a police officer. The WSWS commented at the time: “There is a great deal of evidence that points to Troy Davis’s innocence. But the state parole board denied him clemency Tuesday despite the fact that seven out of nine witnesses in his trial recanted their testimony, citing police intimidation, and jurors publicly repudiated their opinions. … The legal lynching of Troy Davis brings into focus the remorseless brutality of American society in the 21st century.”

Chukwu told Collider that retired prison wardens had protested against Davis’s execution. “These were wardens,” she went on, “who, collectively, had overseen over a hundred executions, and they spoke, firsthand, about what it’s like to have you and your prison staff carry out these executions, and they spoke to the emotional and psychological consequences. And so, the morning after Troy Davis was executed, I really was just obsessed with the question, what are those consequences? What’s it like for your livelihood to be tied to the taking of human life? That’s really where it started. We’ve never seen this perspective before, in American cinema, and I wanted to investigate.”

In an interview with NPR, the director explained that making Clemency “has transformed me. Writing, directing, researching, committing my life to this—not just film, but to the people who are represented in the film has changed me in that it has expanded my capacity for empathy. It has really made me redefine what justice and mercy really are. It has really pushed me to not define people by their worst possible acts. It has really made it clear to me that directing is empathy. And so it’s made me a better human, it has made me a more compassionate person and it’s made me a better storyteller.”

All good reasons why Clemency is a successful film, directed against the extermination of individuals of “substance, of flesh and bone, fiber and liquids.”