Over the past week, state and federal governments have demanded that nine cruise ships in Australian waters near major ports depart immediately, despite the risk of mass coronavirus outbreaks on board. As many as twelve other cruise liners are in or near Australian waters.

The dictates have placed at risk the safety and lives of the 11,000 people on board the nine vessels, the majority of whom are low-paid workers. The operators have, for several weeks, insisted that their ships be allowed to dock. 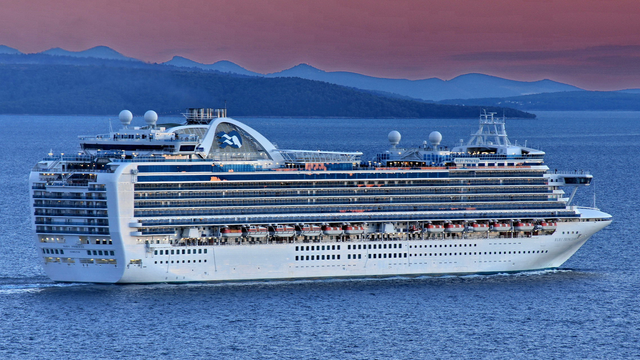 This morning, officials in New South Wales, where eight of the ships are located, claimed to have achieved a breakthrough. After weeks of public hectoring and denunciations from politicians and state bureaucrats, some of the companies involved appear to be preparing to remove their boats from Australian waters, with the Pacific Explorer and the Carnival heading north.

The situation facing the other vessels, including those at the greatest risk of a viral outbreak, is uncertain.

Many of the ships are registered in the Caribbean where the multinational companies that own them can take advantage of low tax rates. If the boats leave Australian waters, they face the prospect of weeks, or even months at sea, with the likelihood that other countries en route will also prevent the ships from docking at their ports.

The callous government decrees have been issued in the face of warnings from charity and international shipping workers’ organisations of a potential “humanitarian disaster” on board the ships. Already, coronavirus cases have been reported on at least three of the vessels.

The dangers of rapid mass transmission of COVID-19 in the confined quarters of cruise ships are well known. On the Diamond Princess, which was stranded off the coast of Japan last month, 712 of the ships’ 3,700 passengers and crew were infected. Ten of them died. Hundreds of passengers on the Ruby Princess who disembarked in Sydney later tested positive, with at least seven fatalities so far.

The Ruby Princess is among six vessels still stranded off the New South Wales (NSW) coast. In an act of gross negligence, state and federal authorities allowed 2,700 passengers to leave the vessel last month without any temperature checks, coronavirus tests or medical examinations.

The decision, for which no explanation has been provided, has contributed to the spread of the virus in NSW, Queensland and South Australia. In each state, infected passengers from the ship, or those who contracted the virus from them, account for a substantial proportion of the total number of confirmed cases.

Having facilitated the rapid spread of the virus in this way, the NSW Liberal government is now refusing to safely evacuate the estimated 1,100 crew members who remain on board. Earlier this week, six staff suffering “respiratory symptoms” were taken from the ship to hospital. This clearly indicates that the virus is continuing to spread on the vessel.

Only on Thursday did state authorities arrange for doctors to board the vessel for discussions with the ship’s master and medic. The visit was conducted in an aggressive military-style operation involving Australian Border Force officers and NSW police. Doctors later stated that the purpose had not been to examine all crew members, and that further cases were anticipated.

Staff, however, have pleaded to be allowed to leave the ship immediately. In comments to the Australian Broadcasting Corporation on Wednesday, one worker said: “It’s all a nice political chess game, but I strongly believe now is not the time for this. I am concerned, as we are in a closed environment.

“It’s a mental challenge thinking about the future and what it holds for us [while] reading everywhere that Australia wants us out,” the crew member said. They added that it would be “doable on a technical aspect” for the ship to return to the US, where it is registered, but asked, “What if a crew member suddenly needs heavy medical care and we’re in the middle of nowhere?”

Under the direction of the federal Liberal-National government, the Border Force commissioner has issued official notices for all of the ships to leave Australian waters, punishable by substantial fines or criminal prosecution.

Government representatives have begrudgingly acknowledged this week that they are obligated under international law to provide medical treatment to those within their waters. It is clear, however, that only the absolute minimum assistance will be provided.

The callousness of the official response was summed up by federal Home Affairs Minister Peter Dutton, who publicly mused yesterday that: “We’ve also got to be cautious about the fact that if you force these boats to set sail, and they end up having people die or people who are seriously sick by the time they get a couple of hundred nautical miles off the coast, they’d turn around and come back.”

The attacks on the cruise ship workers are bipartisan. Western Australian (WA) Labor Premier Mark McGowan held a press conference on Wednesday where he demanded that the Artania leave the state’s waters and “go home.” Some 41 passengers and crew from the ship are already being treated in WA hospitals, while some of those trapped on board have reported feeling “unwell,” an indication that the virus is rampant.

McGowan nevertheless called on the federal government to force the ship to depart, even flagging the possibility of a military takeover of the vessel.

Governments are attempting to whip-up nationalism to divert attention from their criminally-negligent response to the pandemic, which has already provoked widespread anger. Their denunciations of the cruise ships echo their attacks on asylum-seekers, who have been subjected to decades of bipartisan persecution.

As with the brutal treatment of refugees, the decision to jeopardise the safety of thousands of cruise ship workers is a warning to the entire working class. In effect, the ships are being used as a test case for the denial of adequate medical care to broader sections of the population. Underfunded hospitals are already struggling to cope with demand and medical experts are warning that a lack of intensive care beds and ventilators will mean that some critically-ill patients will be unable to receive treatment over the coming months.

Yesterday, NSW Police Commissioner Mick Fuller declared that “bringing 9,000 people off the cruise ships” could “overload” the state’s hospitals. His comment was an admission that the majority of those trapped on board are likely either already infected or at imminent risk of being so, and that nothing will be done about it.

The plight of the cruise ship workers is only the sharpest expression of a broader assault on the safety and conditions of workers within Australia, being enforced by Labor and Liberal-National governments and the corporatised trade unions.

Australian Council of Trade Unions Secretary Sally McManus is collaborating with the government on a daily basis as it hands billions of dollars to the major corporations that are sacking tens of thousands of workers, and does nothing to improve the healthcare system.

The unions have forced their members to continue working, even when they are in immediate danger of contracting COVID-19. This morning, the Age published excerpts of the transcript of a meeting of workers and a Construction, Forestry, Maritime, Mining and Energy Union (CFMMEU) representative after it emerged that a worker on the project had been infected.

The workers at Multiplex’s $2.8 billion Melbourne Square development, one of Victoria’s largest development projects, voiced fears that they were at risk of infection. The union official declared that he had received no information from the health department, before instructing workers that they could go home if they wished, but would not be paid if they did so.

In comments to the Age, Dave Noonan, the CFMMEU’s national construction secretary declared that the industry was “essential” and had to continue operations. “COVID-19 is a risk that the industry needs to manage if it is to remain in operation through this period,” he said.

The sole concern of Noonan and his fellow bureaucrats is that the construction boom continues at all costs. For their role as an industrial police force of the companies, the union officials are handsomely rewarded.

Noonan’s claim that all construction is “essential” is exposed by the nature of the Melbourne Square development. The workers forced to stay on the job are not building a hospital or health facilities, but luxury apartments and a high-end retail complex.

Other workers are also being needlessly exposed to the virus.

Earlier this week, six Qantas baggage handlers tested positive at Adelaide airport. The Transport Workers Union has claimed that after the initial infection “not enough protections were put in place to stop the spread.” The union itself apparently did nothing to intervene. On Wednesday, five more handlers and two of their relatives also tested positive, while up to one hundred other employees may have been exposed.

Several retail workers at Kmart and Coles have also contracted COVID-19, after employees in the sector complained of inadequate precautions.

On Wednesday, St Mary’s Senior High School in western Sydney, which has 900 pupils, closed after a student tested positive. At least two schools in South Australia shut this week after students or staff contracted the virus.

The cases are an indictment of the state governments, which have insisted on keeping schools open in line with federal directives. For their part, the unions have sought to prevent any unified struggle by teachers for the immediate closure of all schools.