Germany’s federal government has implemented a so-called “coronavirus bailout program” for major companies, banks and the super-rich. But workers in hospitals and care homes and in industry, whose work is essential to the population’s basic needs, are being forced to work under catastrophic conditions.

Elementary measures to ensure workplace safety are absent, while work loads are rising dramatically. Instead of demanding that the government adopt emergency measures, the Robert Koch Institute (RKI), the official agency for infectious diseases, recommended a loosening of quarantine guidelines for medical personnel last week. 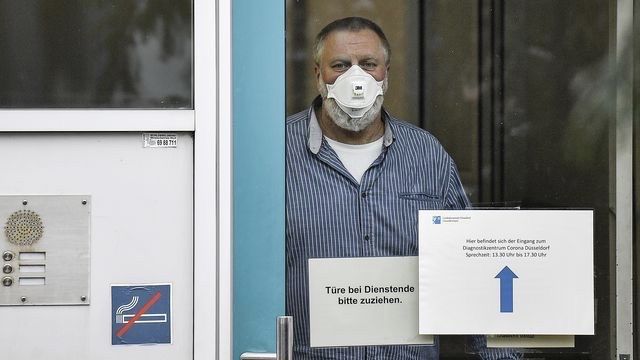 An employee wearing a face mask and gloves is waiting for the next patient behind the door of the corona diagnostic centre in Düsseldorf [Credit: AP Photo/Martin Meissner]

From now on, an unprotected health care worker who comes into contact with an infected patient will not automatically have to go into quarantine. This has prompted widespread outrage among doctors, nurses and other health care staff because the new policy will allow the virus to spread unhindered in hospitals and care homes.

Shortly after RKI’s announcement, Health Minister Jens Spahn (Christian Democratic Union—CDU) announced a loosening of restrictions on working hours for health care staff. This came on top of the suspension of minimum staff requirements for certain types of hospital wards.

A Berlin nurse, Nina Magdalena Böhmer, posted the following statement on on Facebook: “As a nurse, I feel like we’re really being made a fool of and I don’t know what to think any more. First, no material there, then we have to continue working after contact, now this. And then Spahn adds that it isn’t about the money and the profession just has to be made more attractive. I wonder how much connection with reality these people actually have.”

In comments to the daily Tagesspiegel, Böhmer said, “The health care emergency has been common knowledge for years. There were reports, talk show discussions, but nothing was done.”

She added, “I think the health system ought not to be privatised. I think it’s absurd that wards have to take in more patients than they have capacity for because otherwise they wouldn’t make money.”

She noted that at times she is the only trained staff member on a ward and has to care for 50 patients, assisted only by a trainee.

Like health care staff, truck drivers are often described as the heroes of the coronavirus crisis. They ensure that the supermarket shelves are refilled. They are on the go day and night and spend their breaks on the road. But their working conditions are continuously deteriorating, in part because almost everything they require for food and basic hygiene is unavailable due to closures.

A report by the radio station NDR-1 Lower Saxony noted: “Due to the coronavirus, the restaurants at the rest stations on the motorways have all been closed. If anything is on offer at all, it is just snacks.”

Responding to the claims by the Economy Ministry that basic provision of food on the motorways was guaranteed and normal standards of hygiene would “of course be retained as much as possible,” Schumann expressed his astonishment.

“It’s a disaster for any long-distance driver who lives on the road,” he said. “Theory and practice are certainly very far apart on that.”

Schumann demanded that the showers and toilets at least be thoroughly cleaned and that measures be taken at car parks and rest stations to ensure that truck drivers can protect themselves from the coronavirus.

Responding to the hypocritical media talk of truck drivers being “coronavirus heroes,” he said, “We’re just normal truck drivers doing our job. And whether someone stands up and claps or says, ‘Thank you,’ that won’t get us anywhere. We want to live like human beings at the rest stations.”

An employee of FraCareServices raised serious accusations about the lack of infection protection measures at Frankfurt Airport in a report posted by the Offenbach Post Online. “The conditions at Frankfurt Airport are a scandal and totally irreconcilable with the country’s pandemic rules,” he said.

FraCareServices is a joint subsidiary of Fraport, the operator of Frankfurt Airport, and Lufthansa. The approximately 800 workers support passengers who require extra assistance, such as the elderly, children or people with disabilities. Their tasks include assisting people who have difficulty walking, which cannot be accomplished without physical contact even at a time when the coronavirus is spreading.

“We don’t get disinfectant or face masks, not even gloves,” the worker said. “And this is in spite of the fact that we inevitably have contact with the customers. It’s often impossible to maintain the required distance.”

He said the wheelchairs should be disinfected after each passenger, but calls to this effect by employees and the works council have been ignored by management. “There is no crisis committee, and no attention is paid to a pandemic plan,” he added.

As is the case at many other workplaces, Fraport dismissed the accusations and said employees were free to wear masks or gloves if they wished.

The FraCareService worker also pointed to serious safety problems. “It is outrageous that planes are still landing here from Iran and other crisis regions,” he said. The daily arrival of planes from Italy and China can no longer be justified, he argued. He said he had not seen any special measures, amid the inevitable pushing and shoving, for passengers arriving from high-risk areas. “Their temperature is not taken when they arrive, nor is any attention paid to safe distancing,” he noted.

Steel workers continue on the job

At ThyssenKrupp Steel anger and disbelief over the absence of protective measures and guidelines is widespread. In steel plants, most rules, including maintaining a safe distance from colleagues, are impossible to follow.

The news that Industrial Solutions, a subsidiary of ThyssenKrupp Steel, had donated 38,000 medical masks and other protective clothing to the health authority in the city of Dortmund met with opposition on Facebook. Most steelworkers have no masks. The masks donated by Industrial Solutions were taken from the plant’s stockpile and handed over by the company’s works council.

The workers are extremely concerned. This is above all due to the drastic downsizing programme that was implemented by management, in collaboration with the IG Metall trade union. Many fear that the crisis will be exploited to eliminate their jobs even more rapidly.

A steelworker at Outokumpu’s plant in Krefeld wanted to remain anonymous. “From my own experience, I know,” he said, “that German companies are using the coronavirus pandemic to boost their profits at the expense of the workers. They want to profit from their competitors having closed their factories in Asia. They have full order books and even allow workers to work overtime, without any concern for their health.”

He considers himself to be part of an at-risk group and complained that there is no disinfectant or other provisions to prevent the spread of the coronavirus. While the main administrative offices are empty because those employees are working from home, the production workers are considered “fair game.”

“A two-class society in the plants,” he said.

“We are all angry,” he continued, “and feel like we’re being messed around. Even those of us in at-risk groups have to carry on working. An information leaflet said we should speak to the company doctor. I did that. He advised me to wash my hands and use disinfectant. But we don’t have any disinfectant or face masks. I operate keyboards, telephones etc.”

While many workers face unemployment or being placed on reduced working hours, others face even greater workloads.

Amazon is not the only company with booming sales that is intensifying exploitation. Other delivery services are also profiting from the crisis. The Dutch grocery delivery service Picnic, which has operated in Germany for two years, is expanding. The subsidiary, Picnic GmbH, which is headquartered in Düsseldorf, operates purely online and has no stores. Products are ordered and paid for via an app, and then delivered to the customer’s home.

The company opened its second fulfillment centre in Germany on Wednesday in the town of Herne in the Ruhr region. The company’s capacity will be more than doubled. It was supported in this by the state government of North Rhine-Westphalia.

Picnic now delivers to some 80,000 customers in the Ruhr region and the Lower Rhine area and employs over 1,000 people. Two hundred additional workers have been hired in recent weeks. The low-cost service, featuring cheap products and free delivery, and the growing profits of shareholders are at the expense of the working class.

The World Socialist Web Site received an email from a Picnic employee. Like many of her colleagues, she is a student. She is employed by a temporary job agency.

She reported that demands by the workers for safeguards to protect themselves as well as customers, many in the high-risk category, were rejected by the company. Although disinfectant is supposed to be available on every electric delivery trolley, no face masks are being purchased.

Calls for an increase to the low wage (€10 per hour before taxes) were dismissed with the claim that Picnic is not Amazon and is still a young company in Germany. In other words, management has no intention of sacrificing its lucrative business model for a few more euros per hour to the workers, never mind to protect the health and safety of workers and customers.

In the United States, larger protests and strikes at grocery delivery services like Instacart, Amazon and Whole Foods have broken out. On Tuesday, the WSWS published a statement from the Socialist Equality Party urging support for these job actions.

There is no reason why the distribution of food and other essential items should be run by Instacart, Amazon and other private corporations. This vital social service should instead be part of a centrally planned socialist economy, based on addressing social needs, not generating private profit. All of society’s material and human resources must be marshaled on a socially rational basis not only to fight this deadly disease, but to put an end to poverty, social inequality and class exploitation.

The working class, socialism and the fight against the pandemic
[1 April 2020]