Yesterday marked the end of the first 100 days of the coronavirus pandemic, from when the World Health Organization was first notified of a “pneumonia with unknown cause” in China. Since then, there have been 1.6 million officially confirmed cases of COVID-19 around the world and more than 95,000 deaths. There have been more than 300,000 new cases and at least 25,000 deaths since this week began.

The United States itself has had 462,000 cases, more than three times those in Spain, the second-worst country, with 152,446 cases. The US also has 16,114 deaths, and is poised to overtake Italy, the country with the highest number of deaths at 18,279, within five days. And the pandemic has begun to make inroads into the heavily populated less developed countries: India, Brazil, Indonesia, Mexico, Nigeria, Pakistan, Egypt.

Within the United States itself, there has been no let-up in the rate of infections and deaths. In the New York metropolitan area, the epicenter of the crisis, there have been nearly 160,000 cases and 7,067 deaths, with more than 1,500 new deaths reported in the last two days. New York City has begun to dig mass graves on Hart Island as the death toll becomes unmanageable for the city’s funeral homes and cemeteries.

The death tolls in New Jersey and Michigan are 1,700 and 1,076 respectively, while the case numbers in Illinois, Massachusetts, Pennsylvania, Michigan, Florida, Louisiana and Maryland are accelerating. In addition, the New York Times reports that hundreds of rural counties across the country that had been virus-free two weeks ago are now reporting infections and deaths.

Yet even as the pandemic continues its bloody rampage in virtually every corner of the globe, the Trump administration, the corporate media and the entire US political establishment are declaring they can discern “glimmers of hope,” that the fight against COVID-19 has “turned a corner,” that there are “reasons for optimism.”

According to US President Donald Trump, “We’re at the top of the hill, pretty sure, and now we’re going downward. In some cases we’ve already started that process.”

To that end, the US Centers for Disease Control and Prevention has published “interim guidance” that provides the justification to force tens of millions of “critical infrastructure workers” back to work. These include law enforcement, janitorial staff and workers in agriculture, manufacturing, information technology, transportation, energy and government facilities. 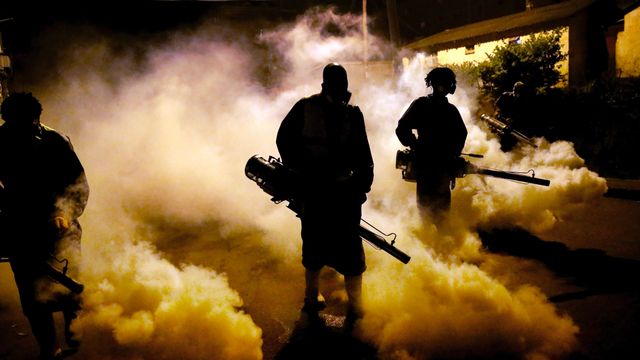 Members of a privately-funded non-governmental organization working with county officials disinfect a street to help curb the spread of the new coronavirus, during the dusk-to-dawn curfew in Nairobi, Kenya Thursday, April 9, 2020. (AP Photo/Brian Inganga)

Along with the 18 million health care workers and 3 million grocery store workers in the country, the Trump administration is calling for at least 73 million people to be sent back to their jobs or continue working in the midst of a deadly and highly contagious pandemic. And the guidelines are so vague that millions more could be ordered back to plants, warehouses and offices with the claim that they are “essential.”

Moreover, the CDC only recommends that employers “should” ensure that their workplaces are sanitary and that their workers are healthy. The entire document paves the way for corporations to resume exploiting their employees without expending a cent on ensuring that their workers don’t succumb to the pandemic.

When asked at yesterday’s coronavirus task force briefing if a nationwide testing system for the virus is necessary before sending workers back to work, Trump snapped, “No. We have a great testing system. We have the best testing in the world. There are certain sections in the country that are in phenomenal shape already. Other sections are coming online. Other sections are going down.”

Trump is engaging in crude charlatanry. While the official statistics indicate that the number of new cases may be the same from day to day, that does not mean the epidemic has stabilized. On the contrary, the number of coronavirus cases is still increasing by an average of 30,000 each day. And there is no guarantee that even extreme social distancing measures ultimately hold: Italy has seen an uptick in its new case figures in the past two days, despite weeks of a nationwide lockdown.

Another form of this argument was taken up by New York Governor Andrew Cuomo, who during his daily press conference on Thursday cited the decreasing number of new hospitalizations and new admissions to intensive care units as a sign that the pandemic was slowing down. Cuomo did not state, and no reporter questioned, whether or not this is a reflection of hospitals reaching a saturation point and being unable to take new patients or people simply afraid to go to hospitals for fear of being infected.

Neither Trump nor Cuomo was asked about the discrepancies between the fatalities declared as caused by the coronavirus and the sharp spike in deaths of people at home in New York City. Mark D. Levine, a member of the City Council’s health committee, has noted that there are currently 200–215 people dying in their homes each day, up from 20–25 a year ago. This suggests that thousands of people who have died from COVID-19 are not being counted.

It was also announced that the administration plans to be able to do 750,000 tests per week, this will not happen for 4–8 weeks. By that time, likely hundreds of thousands more will be infected and tens of thousands will be dead. Only the rich and their hangers-on will be tested quickly.

The numbers that Trump and the American ruling class are focused on, however, are not the toll of sick and dying—about whom they could care less—but the Dow Jones Industrial Average and other figures indicating their continued accumulation of wealth and profits.

The Dow has shot up more than 5,000 points since its low on March 23, a rise sparked by the trillions of dollars that have been pumped into corporations and the financial markets as well as predictions that factories and workplaces will soon reopen and the process of extracting profit from the labor power of the working class would resume with full force.

Wall Street is also being buoyed by promises that the Federal Reserve will continue pouring unceasing trillions into their gaping maws, even as the Trump administration and congressional Democrats haggle over the terms in which rations will be doled out to workers and small businesses who face poverty and bankruptcy from the ongoing economic collapse.

The working class faces an irreconcilable class conflict. Thousands of workers have carried out strikes and protests over being forced to work under unsafe conditions with the spread of the coronavirus epidemic. It was this resistance that forced corporate America to accede to the shutdown of the auto plants, factories and many other work locations. The efforts by Trump and his Democratic Party accomplices to declare America “open for business” again, under conditions of a rising toll of infections and deaths, will trigger a social explosion.