London bus drivers speak out: “They are doing absolutely nothing to protect us!”

Following the deaths of nine bus drivers from COVID-19, London bus drivers told the World Socialist Web Site about the lack of basic safety being enforced by the private bus operators, Transport for London (TfL), and the unions which is putting lives at risk. Due to fear of victimisation, all drivers wished to remain anonymous.

A driver with many years of service expressed fury over the Unite union’s joint letter with TfL and Metroline sent to workers on Tuesday: “It’s disgusting—they’ve joined up with the company and the mayor of London. They are doing absolutely nothing to protect us. I’m an asthmatic and I need that PPE [personal protective equipment] in full force to go to work. I started taping up the holes in the driver screen with cello-tape. There are holes in the screen where passengers can speak to the driver. I asked one of the managers what they were going to do about it, they said, ‘We’re waiting for the TfL’ … It was like that for about 10 days.”

None of the safety conditions described in the joint letter were operational at his garage. “There are no hand sanitisers whatsoever … I was cleaning the bus myself with blue tissue paper.”

The driver disputed Unite and TfL’s claims that buses are being “deep cleaned” each night. “I know for a fact, because I used to be a cleaner on the buses years ago … They can’t deep clean because they don’t have the staff. They can’t deep clean 150 buses at the garage in one night. It used to take us at least 45 minutes to deep clean a bus. We used to have 10 cleaners and we’d do 10 buses [per night, rotating every eight weeks].” 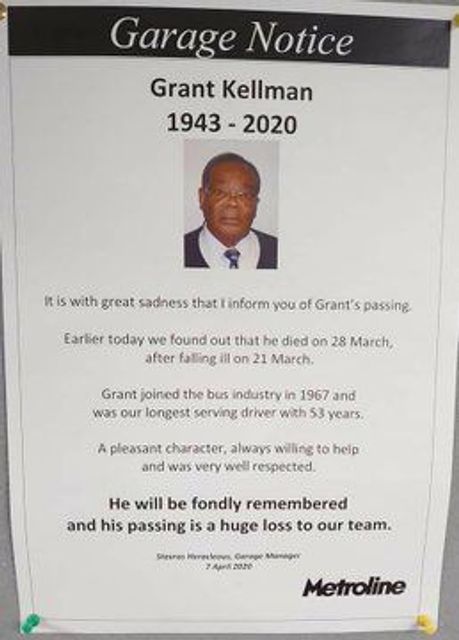 Memorial notice posted in a garage for Grant Kellman

Asked whether drivers had been given gloves, the driver replied, “Gloves? What gloves? We don’t have gloves. They are only for the engineers—but I don’t think the gloves are protective for the engineers either. They’re just the thin blue plastic ones they use in the fruit and veg shops.”

At a garage with around 500–600 drivers, just two sanitiser containers had been provided: one at the entrance and another in the canteen. Both were now empty.

“Every driver is angry,” the driver said. “Every one of them, but we can’t do anything because the union has signed off on this and done nothing whatsoever.”

Another driver who had just finished a shift said, “The union is not making any noise about what’s going on. People are worried because four of the workers who are dead are from my company, Metroline.”

Asked to comment on the claim that bus drivers don’t need PPE, the driver replied, “Metroline have been putting that line out for 2–3 weeks about PPE because NHS England and the Department of Health are saying this, so drivers are buying their own.

“We’ve had hand sanitiser in the garage for about a month, but the dispensers have not been refilled, so they are empty now. They didn’t have alcohol in them, so they are useless.

“The advice is the same for everyone else. Try to stay 2 metres apart and wash your hands regularly. They are supposed to have closed off certain seats to prevent people sitting on them, and put stickers up asking passengers not to stand next to the driver, but that hasn’t happened.

“They were supposed to cover the holes in the screens by the driver, but this hasn’t happened on some buses. I drove one the other day, and drivers are covering them up themselves with sticky tape and clingwrap.

“Buses aren’t being cleaned every night. They’re done on a rota basis. They’re just paying lip service and the union have just agreed to everything. I don’t get involved with the union anymore as they just piss me off.”

Some workers had started to section off the seats closest to the driver to protect themselves. Management responded to these efforts with threats of disciplinary action.

“To be honest, I would’ve taken the furlough as it’s not safe. The whole coronavirus thing in general has been mismanaged from the start. You don’t hear a peep out of the union about anything.

“All this talk of the workplace being deep cleaned is rubbish as you go to work the next day, and the bins haven’t been emptied. You don’t know which areas have been deep cleaned. 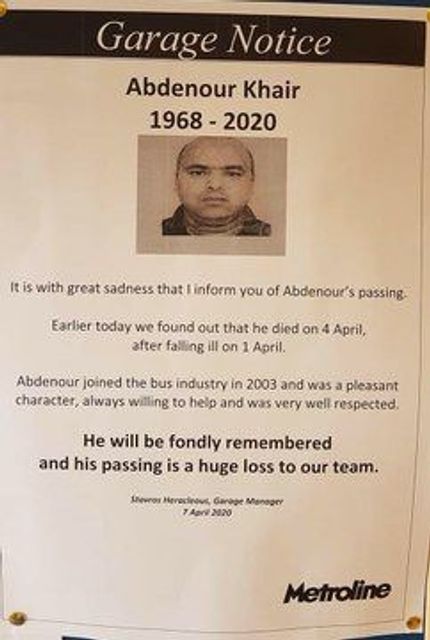 Memorial notice posted in a garage for Abdenour Khair

“We are aware that people have died, but we aren’t being told if they caught it at home or at work. The only real solution is to shut down everything. If the government can’t supply PPE to NHS [National Health Service] staff who are in contact with it every day, how are they going to give it to us? We’re like the posties, seen as not essential in that sense. I don’t know what the solution is.

“At this stage people are just moaning about it, and not organising. We should be able to go to work safely, but I don’t think that that is going to happen. There has been publicity about it, but there haven’t been protests where people have walked out, maybe due to lack of faith and protection for us. The union has been hopeless for ages.”

For the most part, members of the public were doing the right thing. “People on the bus are trying to keep their distance. The public aren’t being stupid.” But conditions for the drivers were difficult. “The public toilets are closed, and so are the shops. The contractor that TfL use to clean our facilities on the stand and for our meal release are not being cleaned. You would think that they would do this even more now.

“There’s one toilet for all the drivers at Hampstead and that is probably used by 150–160 drivers a day. It’s revolting. I’ve complained to my managers about it, but nothing’s done.

“These complaints and others have been going on a long time, and the union doesn’t address it. I used to be involved heavily in the union, but I got fed up with it. They didn’t listen. All they were worried about was that we didn’t rock the boat with TfL.

“After this is over with the furlough and everything, we are going to have to pay that money back. It’s going to be the working class suffering again and then they’ll say we need more austerity to pay it off.”

The following is a list of bus and other transport workers who have been killed as a result of the Johnson government’s “herd immunity” policy and the flagrant disregard of the lives of the working class, even as key workers have risked their lives to provide an essential service. The list is incomplete and will be added to as more information becomes available.

We urge drivers and family members to contact us if they would like to provide any additional details.