Federal inspectors have visited 80 nursing home facilities in Massachusetts since March 23 and found that staff members were not properly washing their hands at one-third of the facilities, and personal protective equipment was not properly used at a quarter of the locations.

Some 1.3 million people are residents of nursing homes nationwide. The US Centers for Disease Control and Prevention (CDC) estimates that even before the coronavirus pandemic there were between one million and three million serious infections each year at long-term-care facilities. There were an estimated 380,000 deaths annually. With the addition of COVID-19 victims, this figure is set to grow substantially.

Massachusetts has more than 37,000 people living in nursing homes. Data provided by the US Centers for Medicare and Medicaid Services largely corresponds to the national figures. Over the past three years, 234 of 377 Massachusetts nursing homes were cited at least once for failing to meet infection-control standards. This figure is for nursing homes only and does not include other types of longterm care facilities that are subject to different inspections. 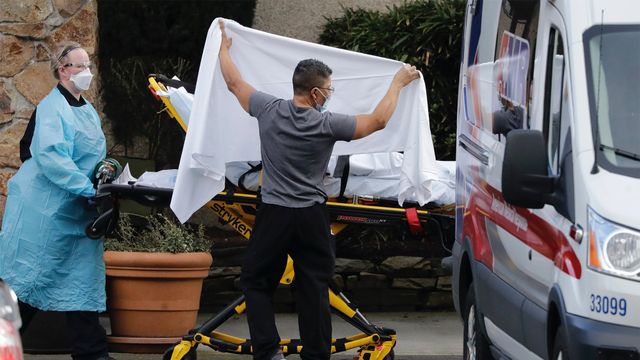 A person is taken to a waiting ambulance from a nursing facility where a mass outbreak of the COVID-19 virus took place earlier this year. (AP Photo/Elaine Thompson)

According to the April 8 report from the Massachusetts Department of Public Health, there were 1,236 confirmed cases of the coronavirus among residents and staff at 140 longterm care facilities across the state. These figures likely greatly undercount the actual number of cases because testing remains widely unavailable.

Multiple nursing homes and assisted living facilities around western Massachusetts are reporting cases of COVID-19. In Agawam, 57 residents of Heritage Hall Nursing Home have tested positive for COVID-19. The Christopher Heights of Belchertown facility for assisted living is reporting four residents and one employee with COVID-19. JGS Lifecare in Longmeadow reports that it has 29 cases of COVID-19 and has placed those residents in an isolation unit.

The situation is so critical in the state that the Department of Public Health has called in the Massachusetts National Guard to help administer tests for the virus at nursing homes. In the eight days prior to April 9, guardsmen and women tested nearly 2,600 nursing home residents at more than 140 facilities across the state.

State officials are pressing ahead with a plan to designate nursing homes throughout the state as treatment centers for recovering COVID-19 patients, even as the first three homes agreeing to relocate residents report infection outbreaks.

AdviniaCare in Willmington, where 77 out of 98 nursing home residents have tested positive, still plans to convert to a recovery center. David Ball, a spokesman for AdviniaCare’s Norwood-based parent company, Pointe Group Care, confirmed that seven residents who tested positive at the facility have died, all of whom were receiving end-of-life care before they were tested.

Recovering patients still needing oxygen and other support began arriving at the Beaumont Rehabilitation and Skilled Nursing Center in Worcester on April 6, even as residents who had tested positive for the virus remained quarantined on a separate floor in the facility.

At least another three sites on the South Coast and Cape Cod are being converted into recovery centers. These include two former New Bedford nursing homes that were shuttered following the bankruptcy of Skyline Healthcare.

At the Alliance at West Acres nursing home in Brockton, five residents died and 28 tested positive, according to the parent company, Alliance Health and Human Services, based in Southborough.

Governor Charlie Baker said he hoped the “step-down facilities” would handle about 1,000 patients released from critical care before they return home. Administration officials have allocated $30 million to compensate operators that repurpose their nursing homes.

The plan to move residents has encountered growing protests from families and resident advocates. On April 8, the state chapter of the senior advocacy group AARP (American Association of Retired Persons) expressed concern about the involuntary moves. “Transfer [of residents] without offering appropriate and effective counseling and planning can lead to isolation and despair, and the lack of predictability maximizes fear and anxiety,” the group wrote in a letter to Baker.

The situation in Massachusetts is replicated across New England. Last Thursday, the Rhode Island Department of Health said 43 people had died from coronavirus complications. Approximately 28 people, about 65 percent of reported deaths, were at nursing homes.

Twenty nursing homes across the state have at least one case, up from 12 facilities just five days previous. Some 400 total cases have been reported statewide, 270 residents and 130 staff.

Golden Crest in North Providence has 75 cases between residents and staff and 13 patients have died, according to the Rhode Island Department of Health (RIDOH). Oak Hill in Pawtucket has 80 cases among residents and staff, and nine deaths have been reported there.

In Connecticut, as of last Tuesday, 82 of the 215 nursing homes had at least one person who had tested positive. As stocks of masks and smocks run low, workers are being asked to fashion their own protective equipment from trash liners and paper bags, according to Rob Baril, president of SEIU 1199 New England, whose membership includes 22,000 health care workers, including those working in nursing homes.

Workers are angry both for themselves and for residents. Chelsea Daniels, a licensed practical nurse at Fresh River Healthcare in East Windsor, Connecticut, told ctpost: “Our lives are in jeopardy. We don’t have the option to work from home. We are reusing PPE. We are at risk and nobody seems to care. If we die, who’s left to take care of the residents and patients?”

A young food staff worker at a Masonicare elderly care facility, which describes itself as having “an ageless commitment to caring,” spoke to the World Socialist Web Site about the conditions facing the elderly residents before the pandemic and since the outbreak.

“Before the pandemic even hit,” he said, “I want you to picture a grey room with stained carpet. Trash is piled up in the corners. The side table has various brown stains of unknown origin. A man sits in his bed stifling a cough in a paper towel. It too is stained with phlegm. Outside the room a man cries out for help. Paralyzed on his right side, his wheelchair doesn’t get far before he calls out, ‘Hello? Please help me!’

“These sights are not unusual at Masonicare, an old folks home. Here the elderly sit in filth slowly dying in piss-soaked sheets and stale air. I myself, a food staff member, only heard these things at first from custodians and nursing aides.

“When the pandemic hit, the building went into lockdown and further negligence, I believe as a means of cutting their losses. Myself and my coworkers became delivery workers of meals that residents could no longer procure in the dining room, and we saw the conditions first hand.

“They didn’t give us proper masks until multiple residents died from COVID-19 exposure.”