The United Nations’ World Food Programme (WFP) warned Tuesday that without urgent action and funding, hundreds of millions of people will face starvation and millions could die as a result of the COVID-19 pandemic.

WFP Executive Director David Beasley told the UN Security Council that in addition to the threat to health posed by the virus, the world faces “multiple famines of biblical proportions within a few short months,” which could result in 300,000 deaths per day—a “hunger pandemic.”

Beasley said that even before the outbreak, the world was “facing the worst humanitarian crisis since World War II” this year due to many factors. He cited the wars in Syria and Yemen, the crisis in South Sudan and locust swarms across East Africa. He said that coupled with the coronavirus outbreak, famine threatened about three dozen nations.

According to the WFP’s “2020 Global Report on Food Crises” released Monday, 135 million people around the world were already threatened with starvation. Beasley said that as the virus spreads, “an additional 130 million people could be pushed to the brink of starvation by the end of 2020. That’s a total of 265 million people.” 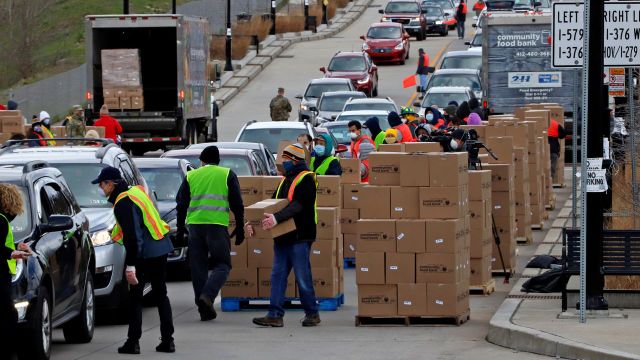 Boxes of food are distributed by the Greater Pittsburgh Community Food Bank, at a drive thru distribution in downtown Pittsburgh, 10 April, 2020 [Credit: AP Photo/Gene J. Puskar]

The regions suffering the most in 2019 were Africa (73 million people “in crisis or worse”) and the Middle East and Asia (43 million people), beset not only with poverty, but also with conflicts and the impact of natural disasters, economic crises and climate change, with the worst locust swarms in decades in East Africa putting 70 million people at risk.

Beasley pointed out that there are already 821 million food-insecure people in the world, a record number. “If we don’t prepare and act now to secure access, avoid funding shortfalls and disruptions to trade,” he warned, the result could be a “humanitarian catastrophe.”

The 10 worst affected countries are Yemen (15.9 million people “in crisis or worse”), Democratic Republic of the Congo (15.6 million), Afghanistan (11.3 million), Venezuela (9.3 million), Ethiopia (8 million), South Sudan (7 million), Syria (6.6 million), Sudan (5.9 million) northeast Nigeria (5 million) and Haiti (3.7 million). All of these countries are the victims of more than a century of imperialist oppression and exploitation that continues to the present. Most, if not all, continue to suffer from US-led military interventions, economic sanctions or political intrigues that have had devastating social consequences.

In the 55 food-crisis countries that are the focus of the report, a staggering 75 million children are stunted and 17 million suffer from wasting. Beasley said, “Millions of civilians living in conflict-scarred nations, including many women and children, face being pushed to the brink of starvation, with the spectre of famine a very real and dangerous possibility.”

African countries affected by conflicts are particularly at risk, including the Central African Republic, Chad, Nigeria and South Sudan, as well as countries hosting large numbers of refugees such as Lebanon and Uganda.

More than half the population of Yemen and South Sudan, which have endured years of wars, already face acute food shortages even before the virus reaches them. At least 14 million Yemenis are on the brink of famine, while 80 percent of the country’s 24 million people rely on food aid.

Save the Children estimated last year that at least 75,000 Yemeni children under the age of five have starved to death since the onset of the Saudi-led and US-backed war. Nearly 3.6 million people have been displaced by the conflict.

In South Sudan, there are more than five million people facing starvation and reliant on food aid to survive, and 1.7 million women and children are acutely malnourished.

More than 30 of the world’s poorest countries could experience widespread famine and in 10 of these countries, there are already more than one million people on the brink of starvation.

The WFP said that lockdown measures in the poorest countries, with fragile health care systems and crowded and unsanitary living conditions, would not suffice to prevent the spread of the coronavirus, while depriving millions of workers of an already meagre livelihood and leading to an economic and humanitarian disaster. The near global restrictions on all but essential work and travel are affecting farm workers and disrupting supply chains.

Millions of farmers in Africa and other low-income countries, already facing high levels of food insecurity, are at risk of not being able to work their land and produce food. Of the 257 million hungry people in Africa, most live in rural areas.

The Ebola epidemic in West Africa provides a stark example of what is at stake. Small farmers were unable to work their land, sell their products or buy seeds and other essential inputs, leaving more than 40 percent of the agricultural land uncultivated.

The WFP also noted that many of the poorest countries have been hard hit by the collapse of the travel and tourism sectors, with villages in the Atlas Mountains in Morocco, for example, almost entirely dependent on tourists and hikers for survival. Others will suffer from the catastrophic fall in remittances (up to 20 percent, according to the World Bank), as migrant workers are furloughed or laid off.

This will affect conflict-torn states such as Somalia, Haiti and South Sudan, and small island nations such as Tonga, with remittances sometimes accounting for more than 30 percent of gross domestic product, as well as larger states such as India, Pakistan, Egypt, Nigeria and the Philippines, where remittances have become a crucial source of external financing. Flows to sub-Saharan Africa are predicted to fall by 23 percent.

Those particularly at risk include refugees and displaced people living in camps and settlements in cities, as well as the elderly, young children, pregnant and lactating women, and the disabled.

For those whose lives already hang by a thread, the economic impact of the pandemic will push them over the edge. Already there have been reports of food hoarding and price gouging in several sub-Saharan African countries, making food both scarce and unaffordable for those most in need. Anger over food shortages has triggered violent protests across South Africa in the last two weeks, while protests have also started in Lebanon.

In northeast Nigeria, almost three million people are already facing hunger and 440,000 children under five are severely malnourished due to the ongoing Boko Haram insurgency. The risk of hunger is already high in India, Bangladesh and Myanmar, while in the Philippines police are enforcing lockdowns at the point of a gun and the government is preparing for a military lockdown as unrest mounts.

In the face of this global catastrophe, Beasley urged the UN Security Council to come forward with a measly $2 billion of aid already pledged but not delivered. He warned that another $350 million was needed just to set up the logistics network to get food and medical supplies—including personal protective equipment—to where it was needed.

This pathetic plea will fall on deaf ears. These sums are a tiny fraction of the trillions the US, the European and other imperialist powers are pouring into tax-dodging corporations and financial institutions to keep them afloat. The only spending the major powers will allocate in relation to the oppressed nations will be to strengthen their military forces for colonial-style interventions to rob these countries of their natural resources and police rising social discontent among workers and poor farmers.

If millions of lives are to be saved in the poorest countries of the world, workers everywhere must take up the struggle to end capitalism and establish a global socialist system based on planned production for need. The development of a socialist political movement of the working class directed against the ruling classes in the imperialist centres and their local agents in the oppressed nations is the only way that the world’s most vulnerable people can be protected against the terrible impact of the pandemic.