As it rapidly escalates its propaganda offensive against China, the Trump administration has provocatively sent US warships into the South China Sea. The US Navy announced on Tuesday that the amphibious assault ship USS America along with two guided-missile destroyers, USS Bunker Hill and USS Barry, were operating in or near disputed waters claimed by Malaysia and China.

The White House has asserted that Beijing is accelerating its build-up in the South China Sea while the world is preoccupied with the global COVID-19 pandemic. It has pointed in particular to the use of runways on Chinese controlled islets by surveillance aircraft and China’s establishment of new local administrations in the South China Sea.

An unnamed Trump official told the Wall Street Journal this week: “I think some of this stuff is profoundly and clearly taking advantage of a bad situation.” A spokesman for the US Indo-Pacific Command was more explicit, declaring: “Beijing is a net beneficiary of global attention diverted towards the pandemic rather than military activities in the South China Sea.” 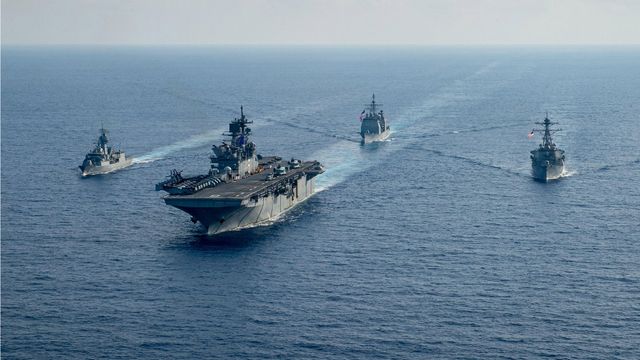 The US, however, is directly responsible for transforming the longstanding regional disputes in the South China Sea involving China and its neighbours—Vietnam, the Philippines, Malaysia and Brunei—into a dangerous flash point. Hillary Clinton as secretary of state under President Barack Obama, set the stage by declaring that the US had a “national interest” in the disputed waters.

China responded by expanding its presence on atolls and reefs under its control. This was then exploited by the US to mount provocative “freedom of navigation” operations, sending US warships within waters claimed by China. Under Trump, these military operations have been ramped up.

Now, as it amplifies its inflammatory rhetoric blaming China for the COVID-19 pandemic, the Trump administration is also raising military tensions in the South China Sea. The US warships entered waters about 200 nautical miles off the coast of Malaysia where China and Vietnam also have claims.

A Chinese survey vessel had been shadowing a drill ship owned by Petronas, Malaysia’s state-owned oil company operating in the area. When the Chinese Coast Guard joined the survey vessel, the Royal Malaysian Navy and Malaysia Enforcement Agency arrived in support of the Petronas ship.

The US naval presence, which was not requested by Malaysia, has only served to further heighten tensions. The US has no territorial claims in the South China Sea but insists that it is necessary to guarantee “freedom of navigation” despite China’s guarantees that it will not obstruct international shipping.

China has repeatedly protested against the presence of US warships and warplanes in areas close to its mainland. The South China Sea is adjacent to key Chinese naval bases in southern China, including sensitive submarine bases on Hainan Island. For US strategic planners, a military presence in the South China Sea is critical to its plans for a blockade or all-out war against China.

Significantly, the US warships currently in the area are being accompanied by an Australian frigate, the HMAS Parramatta, which has engaged in integrated live-fire exercises, coordinated helicopter operations and small boat force protection drills, command and control integration, and maneuvering interoperability.

Boasting of this display of joint military might, Rear Admiral Fred Kacher, commander of the US naval strike group, declared: “To bring this much combat capability together here in the South China Sea truly signals to our allies and partners in the region that we are deeply committed to a free and open Indo-Pacific.”

Successive Australian governments have lined up fully with the escalating US confrontation with China. The commitment of an Australian warship to the latest naval provocation in the South China Sea goes hand in hand with Australian Prime Minister Scott Morrison’s call for an international investigation into the origins of the COVID-19 pandemic—a move in tune with Trump’s insinuations that the virus was produced in a Chinese laboratory.

In a desperate bid to deflect attention at home and internationally from its own criminally inadequate response to the pandemic, the Trump administration is seizing on every opportunity to target China.

Earlier this month Vietnam accused China of sinking a Vietnamese fishing vessel in the vicinity of the Paracel Islands, which are controlled by Beijing but claimed by Hanoi. Amid conflicting claims as to who was responsible for the sinking, the US State Department stepped in to condemn China.

“We call on [China] to remain focused on supporting international efforts to combat the global pandemic, and to stop exploiting the distraction or vulnerability of other states to expand its unlawful claims in the South China Sea,” spokeswoman Morgan Ortagus declared.

The belligerence of the US position was underscored by a statement last week from the chairman of the Joint Chiefs of Staff, General Mark Milley. He issued a menacing warning directed not only against China, but also Iran, Russia, and other potential rivals, declaring: “Our readiness is still strong, and we are able to deter and defeat any challenges that may try to take advantage of these opportunities at this point of crisis.”

The targeting of China is not new. The Trump administration’s trade war measures and continued military build-up against China, following on from Obama’s confrontational stance, reflect the determination of US imperialism to use all methods, including military force, to prevent China from undermining its economic and strategic dominance in the world.

Far from easing tensions and encouraging international cooperation to combat the COVID-19, the Trump administration is being deliberately provocative as the pandemic has exposed the historic decay and decline of American capitalism. The resort, once again, to military operations in close proximity to the Chinese mainland is a sharp warning that the US will stop at nothing to prevent any challenge to its global hegemony, including a devastating war between nuclear-armed powers.