Following Tuesday’s unanimous consent vote in the Senate, lawmakers of both big business parties in the House of Representatives overwhelmingly passed the “Paycheck Protection Program and Health Care Enhancement Act” on Thursday.

Taking every precaution to assure their personal safety and well-being, as opposed to the absence of such precautions for hospital workers, Amazon workers, transit workers, grocery workers and those being sent back into the auto plants, the Democrats and Republicans came together in the House chamber and voted 388-5, with one abstention, to send the approved bill to President Trump’s desk for his signature as early as Thursday evening.

Three of the Republicans who voted against the measure are leaders of the ultra-right Freedom Caucus, including Andy Biggs of Arizona, Ken Buck of Colorado and Jody Hice of Georgia. The fourth Republican to vote against the bill was Kentucky Representative Thomas Massie, who had protested against the passage of last month’s CARES Act on procedural grounds. 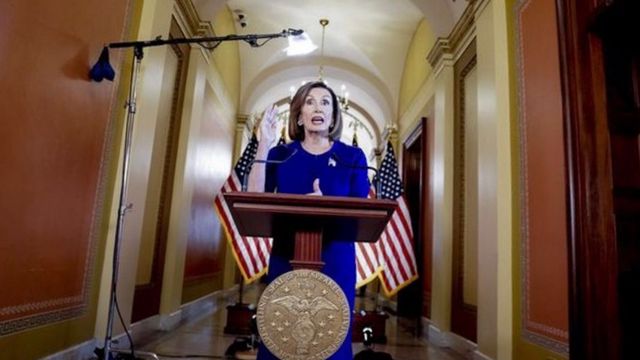 The only Democrat to vote against the measure was New York Representative Alexandria Ocasio-Cortez. In another theatrical display, Ocasio-Cortez gesticulated wildly while castigating Republicans for “not fixing this bill for moms and pops,” before every other member of her party, including the rest of the so-called “squad”—Ayanna Pressley, Rashida Talib and Ilhan Omar—voted for the bill.

House Speaker Nancy Pelosi, whom Ocasio-Cortez fondly refers to as “mama bear,” tweeted her support for the bill following its passage, writing, “Today’s historic, bipartisan vote on our latest #FamiliesFirst package is essential to protecting families across America and ensuring more small businesses have access to the resources they need."

Far from putting “families first” and guaranteeing paychecks for workers, this second round of corporate handouts, as the first, will be largely siphoned off by larger businesses, while the Wall Street banks that process the government-backed loans rake in billions. The vast majority of family-owned entities—restaurants, barber shops, beauty salons, gas stations, etc.—will not receive a dime.

The central provision of the newly passed measure is the replenishment of the so-called “Paycheck Protection Program” (PPP) with an additional $310 billion in funding. The initial $349 billion allocated to the program, supposedly geared to aiding businesses with fewer than 500 employees and keeping their workers on the payroll for eight weeks, ran out after less than two weeks, leaving the vast majority of small business applicants high and dry. Only 6 percent of small business applicants received loans.

It then emerged that large restaurant chains such as Ruth’s Chris Steakhouse, Shake Shack and Potbelly, each with over 5,000 employees and hundreds of millions in revenues, were put at the front of the line of applicants by the Wall Street banks chosen by Treasury Secretary Steven Mnuchin and the Small Business Administration (SBA) to dispense the loans and collect the lucrative fees. These companies received between $10 and $20 million in fee money. The big banks raked in $10 billion in fees.

Other multimillion- and billion-dollar publicly traded firms also received loans. The biggest recipients were two interlocked real estate investment trusts, Ashford Hospitality Trust and Braemar Hotels & Resorts, which received a combined total of $53 million in loans. The firm controls more than 100 properties, including luxury hotels such as the Ritz Carlton Atlanta, which markets itself as “celebration” of “contemporary Southern luxury.” Single night August reservations begin at $341, while a one-night reservation for the Skyline Suite goes for $3,000.

That this fraud was perpetrated by both parties was underscored by the role of Senate Majority Leader Chuck Schumer of New York in making sure that large companies received a disproportionate share of the loan money. The New York Times reported Thursday that the provision inserted into the CARES Act allowing restaurant and hotel chains to receive “small business” PPP loans, as long as all of their units employed fewer than 500 people, was negotiated by Schumer and the right-wing Republican chairman of the Senate Small Business Committee, Marco Rubio of Florida.

Schumer, often referred to as the “senator from Wall Street,” is one of the biggest recipients of investment banking campaign cash. According to OpenSecrets.org, between 1989 and 2016, he received nearly $600,000 from Goldman Sachs.

Prior to Thursday’s House vote, in an attempt at political damage control, Treasury Secretary Mnuchin and the SBA announced that they had set new “guidelines” for the PPP loans that would supposedly bar large firms with alternative credit sources from benefiting. Mnuchin called on the restaurant chains and other large businesses that had received loans in the first round to return the money or possibly face investigation.

This is yet another cruel deception. Schumer, Pelosi, Mnuchin and the rest know that the $310 billion in the new bill will be exhausted in a matter of days, leaving in the lurch most small businesses staring bankruptcy and closure in the face. And even for businesses that receive loans, the money will cover payroll, rent and utilities for only eight weeks. The pandemic and economic contraction will last far longer, leading to the shutdown of tens of thousands, if not millions, of small businesses and the permanent layoff of millions of workers.

The bill also includes a paltry $75 billion in aid to hospitals and derisory $25 billion earmarked for COVID-19 testing. There is nothing in the bill to aid state and local governments, which are facing massive deficits and preparing to slash funding for schools, health care and other essential services and cut the jobs and pensions of public employees.

The bipartisan “small business” swindle: Billions for the banks and corporations, pennies for workers and shopkeepers
[23 April 2020]