Over a million people in the UK have donated to an online fundraising page set up in support of NHS Charities Together, an umbrella organisation of 143 different charities supporting the National Health Service (NHS). 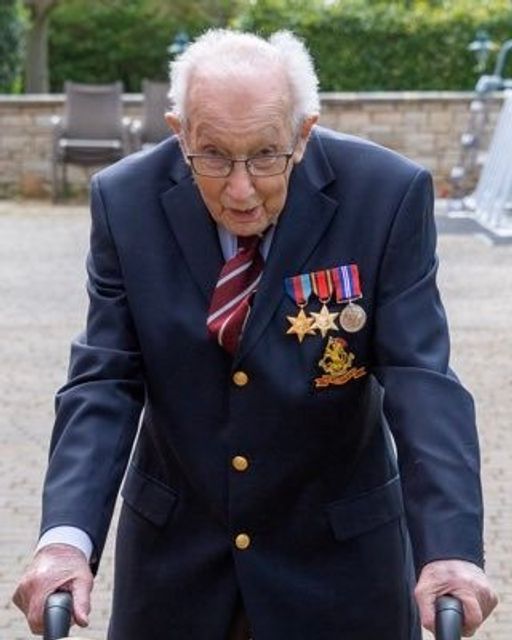 The page, set up by 99-year-old World War II veteran Captain Tom Moore on online fundraising platform JustGiving, received overwhelming support, raising more than £28 million (US$34.6 million) in two weeks. Captain Moore, who is frail and uses a walking frame, pledged to walk 100 lengths of his garden, which is 25 metres long, before his 100th birthday on April 30 to raise money for NHS workers fighting the COVID-19 pandemic.

Moore had initially hoped to raise £1,000, but such was the scale of popular support that this goal was exceeded within 24 hours. His fundraising target was raised several times, each time being met within hours or days, with widespread coverage in local and national news networks. Over 1.3 million individual supporters donated to his page, mostly making small contributions averaging around £20 each.

Captain Moore later released a cover of the song, “You’ll Never Walk Alone,” from the 1945 Rodgers and Hammerstein musical Carousel, in collaboration with British singer Michael Ball and The NHS Voices of Care Choir, with proceeds also going towards his charity fundraiser. The song immediately went to number one in the charts with over 80,000 copies sold.

While no doubt some of the popular enthusiasm for Captain Moore’s fundraising efforts is due to the emotional appeal of his being an elderly war veteran, the enormous response to his call for financial contributions to NHS Charities Together points to the deep-going and widespread support for the NHS and for health care workers within the British working class.

The NHS commands immense popular respect and is understood by many as the most far-reaching and significant reform won by the working class in the post-war period. Its foundation in 1948 as a universal health provider, free at the point of use, is fiercely defended by working people as their fundamental social right.

But there is also widespread recognition that this right is now in jeopardy as the NHS is systematically gutted and transformed into a skeleton, for-profit service, modelled on the US health care market.

More than a decade of funding cuts, privatisation, so-called “efficiency savings” and the consequent understaffing have left the NHS completely unprepared to respond to the coronavirus pandemic. While hundreds of billions are being handed out to big businesses across the country as part of Chancellor Rishi Sunak’s coronavirus bailout plan, many frontline health care workers have been unable to access even the most basic Personal Protective Equipment (PPE) to prevent themselves succumbing to infection. Between 2013 and 2016, Tory cuts to the NHS reduced PPE stockpiles by 40 percent.

There is growing outrage at the government’s criminal failure to provide adequate PPE to NHS workers, as coronavirus deaths continue to soar across the UK. At least 121 health or social-care workers died of COVID-19 as of April 24, according to Nursing Notes.

The money raised by Captain Tom Moore will contribute to a £100 million COVID-19 Appeal launched by NHS Charities Together on April 13, which has already raised over £81 million. But charity money cannot be used to fund “core” NHS services, such as paying nurses and doctors, and is intended only to supplement the work of an NHS trust by providing additional services, such as research or amenities for patients and staff. NHS Charities Together hands out £1 million to NHS trusts across the country every day.

Money raised by the COVID-19 Appeal will likely go towards funding well-being packages, such as food and wash-kits, for health care staff and volunteers, and supporting the mental health and recovery of NHS workers in the wake of the coronavirus pandemic.

The immensely humane display of support for health care workers represented by the response to these fundraising appeals—even as millions of working-class Britons have been thrust into poverty by coronavirus-related job losses or pay cuts—stands in stark contrast to the behaviour of the super-rich, for whom the COVID-19 pandemic is experienced merely as a mild inconvenience.

To cite just one example:

As millions remain trapped in their homes unsure whether they will have a job to return to after lockdown measures are eased—or are forced to continue working in unsafe conditions—reports emerged that over 1,300 private jets had flown in and out of the UK during the coronavirus pandemic, transporting their wealthy passengers to their second homes or holiday retreats.

Of the 1,312 private flights that have entered or exited the country since stay-at-home instructions were introduced on March 23, 545 of them were planes arriving into the UK from some of the countries with the highest numbers of recorded coronavirus cases, including Germany (32 flights), France (27), Spain (25) and the United States (15).

The super-rich, who are a law unto themselves, also made 767 private flights out of the UK despite lockdown measures, with 34 each heading to France and Germany, 30 to Spain, 23 to Russia and 10 to the United Arab Emirates. A private flight to the UAE is estimated to cost as much as £100,000.

The class gulf separating workers across the world from the ruling classes is becoming more pronounced by the day, as the coronavirus pandemic sweeps across the globe, infecting and killing health care workers and other key workers in droves. The broad popular support and financial contributions for health care workers are just one demonstration of the fact that the working class has no interest in diverting society’s wealth into the already overflowing coffers of the super-rich.

The essential principle that must guide the response to the crisis is that the needs of working people must take absolute and unconditional priority over all considerations of corporate profit and private wealth. The chief obstacle to a rational and humane response to the pandemic is the capitalist system and the insatiable demand for profit by the financial and corporate elite.

Every week millions of workers across the UK applaud NHS and other key workers from their homes. But the demand must now go out for a massive investment of funds into the required health and social care infrastructure to tackle the pandemic, to be paid for by the super-rich, the major corporations and banks.