Six weeks after confinement measures began across southern Europe amid the COVID-19 pandemic, the European Union (EU) and governments across the continent are stepping up pressure on workers to return to work even as the pandemic continues. Fully 23,680 new cases of COVID-19 were confirmed yesterday across Europe, for a total of 1.27 million cases and 121,800 deaths. The decision to lift confinement measures, vastly accelerating the pandemic’s spread, is politically criminal and will cost countless thousands of lives.

The example of China’s Hubei province—the pandemic’s first epicenter, where the spread was halted by a far longer confinement lasting from January 23 to April 8, by which point only a few dozen largely imported cases were still being discovered in all of China—has been thrust aside. This weekend saw 6,865 new cases recorded in Spain, 4,681 in Italy, 2,272 in France, 2,178 in Germany, and 9,376 in Britain. Yet governments are pressing for a return to work against the opinions of scientists and of the working population.

This follows a European Union (EU) summit Thursday that announced a €1 trillion bailout and committed the EU to imposing back-to-work policies across the continent. “We discussed progress on the various dimensions of the European response to the pandemic and welcomed the Joint European Roadmap towards lifting of COVID-19 containment measures,” European Council President and former Belgian Prime Minister Charles Michel announced after the summit. 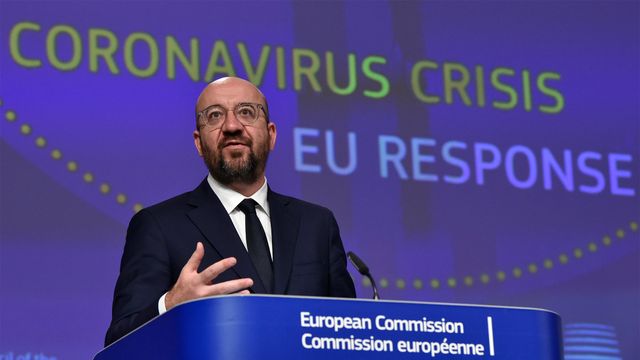 Tomorrow, Spain’s Council of Ministers is to approve Prime Minister Pedro Sanchez’s plan for ending confinement measures, while French Prime Minister Édouard Philippe will announce his government’s plan for an exit from the lockdown in France.

Italian Prime Minister Giuseppe Conte has announced that his government will publish its plans for a May 4 reopening of nonessential companies by the beginning of this week “at the latest.”

While these governments have largely avoided giving concrete details about the policies they plan to implement after the lockdowns, it is already clear that, in the absence of a vaccine or a cure for the virus, the result will be a large increase in COVID-19 cases and deaths.

In Spain, where 59 percent of the population supports strengthening instead of canceling confinement measures, the Coordination Center for Health Alerts and Emergencies (CCAES) has called for intensive care wards to double the number of beds available after the confinement is ended. The CCAES made clear that the Spanish government's policy is not to try to eradicate the disease. Rather, it is seeking to keep the number of cases “at a level that the health system can tolerate, avoiding the risk that it could be overwhelmed,” as in the first wave of the epidemic.

The CCAES also noted that “herd immunity” strategies proposed by European governments were unacceptable as they would flood health systems and lead to mass deaths. “It is not reasonable to base pandemic control strategies on waiting for a sufficiently high percentage of the population to develop total or partial immunity, which implies an unacceptable number of cases and deaths.”

In France, an epidemiological study by the Rouen University Hospital Center (CHU) found that the lockdown cut hospital deaths before April 19 by at least 61,739 (83.5 percent). It estimated that without a lockdown, 23 percent of the population would have had the disease by then. The lockdown thus “avoided around 590,000 hospitalizations and 140,000 admissions into intensive care,” it found. This would have overwhelmed France’s 10,500 available intensive care beds, a figure itself doubled only thanks to health staff’s emergency efforts since the beginning of the pandemic.

This falls roughly in line with projections by Imperial College in London that a “herd immunity” policy would cost at least 250,000 lives in Britain alone. Such fatality rates, at the level of the entire European continent, would lead to a death toll in the millions.

This points to the vast dangers posed by prematurely ending lockdowns and the political criminality of calls by British Prime Minister Boris Johnson and German Chancellor Angela Merkel to deal with COVID-19 by means of “herd immunity.” Nonetheless, French President Emmanuel Macron is pressing ahead with precisely such an agenda.

Several state scientific bodies warned against the policies proposed by Macron, who has ordered a return to work and reopening of schools on May 11. The government’s scientific council, led by Dr. Jean-François Delfraissy, issued a statement calling for schools to remain closed until September and for deconfinement to wait until intensive care units were back to normal occupancy levels. The General Health Directorate reported that despite the gradual tendency for infection numbers to fall, the total number of patients on respirators in France actually increased by 28 yesterday.

Bitter divisions are erupting inside the Macron government itself, as ministers panic at the prospect of an eruption of popular anger after a second wave of COVID-19 cases. One minister complained anonymously to L’Obs about reports on the unviability of a “herd immunity” strategy of hoping the population would be immune if everyone caught the virus. “We seem to be discovering that you can catch coronavirus several times,” the minister said, “but our entire strategy was based on developing immunity. Our situation is that we are falling into an abyss.”

The European bourgeoisie is plunging ahead with a politically criminal back-to-work policy. It is easy for corporate management and wealthy investors to shelter at home, and EU ruling circles are as indifferent to the death of millions of workers in Europe returning to work to boost their profits as an Egyptian pharaoh watching slaves die to build the pyramids.

This toxic class contempt for human life emerged in comments by German Parliament President Wolfgang Schäuble—the prominent architect of capitalist restoration in East Germany in 1989 and of EU austerity after the 2008 crash—attacking calls to protect human life amid the pandemic. He told the Tagesspiegel that when he hears “that all must give way to protecting life, I must say: that is not absolutely correct... If there is an absolute value in our Constitution, it is human dignity. One cannot touch it. But it does not rule out that we must die.”

Schäuble’s horrifying eagerness for death is not simply a personal trait, however, but a particularly brutal expression of the profit interests of the entire European ruling class.

The European financial aristocracy, well aware of a building financial crisis before COVID-19 emerged, has responded to the pandemic by showering itself with vast handouts of public money. The European Central Bank (ECB) announced a €750 billion bank bailout, buying various types of debt to pay off investors in the major banks. The larger European Union (EU) governments each announced hundreds of billions of euros in corporate bailouts, while the EU launched a €540 billion rescue package overwhelmingly targeted to big business, and then announced its most recent €1 trillion bailout at its summit last Thursday.

Even as massive sums are lavished on bailouts of firms, including Air France-KLM (€10 billion) and automaker Renault (€5 billion planned), financiers are demanding that workers return to work to make profits to back the massive amounts of fictitious capital pouring through the financial system. VW in Germany, Toyota in France and other firms in nonessential industries are already reopening in close collaboration with the trade unions.

Naturally, capitalist politicians are presenting various more apparently palatable arguments for ending the lockdown, insisting it is too destructive and costs small businesses and wage earners too much. This was the tack taken by Conte, who told La Repubblica, “We cannot continue with this lockdown. We risk too heavily compromising the country’s socio-economic fabric.”

In fact, the main reason lockdowns have generated hardship is that EU states left countless workers and small businesses with virtually no income. Long lines have formed for limited food distributions in working class districts of Paris, Madrid and other European cities.

Workers must reject this false choice between working and dying in a pandemic and starving in confinement, or the claim that mass deaths are now inevitable. Modern science and technology make it possible to let masses of workers shelter at home, receiving the necessary food and medicine, while scientists work on vaccines and treatments for COVID-19. However, this will require the expropriation of the massive sums of money looted from public treasuries by the financial aristocracy and a political struggle to bring down reactionary governments across Europe and fight to transfer power to the working class.