The deadly return to work begins

This week, official efforts to reopen businesses and roll back social distancing measures will begin in earnest throughout the US, in defiance of the warnings of public health and infectious disease experts of the consequences. If allowed to be carried out, this criminal drive to rush workers back to their factories and workplaces will result in an explosion of new COVID-19 cases and an untold number of deaths.

South Carolina, Georgia, Oklahoma and Alaska all started easing restrictions on businesses last week. In Georgia, restaurants and movie theaters will be allowed to reopen today, with a veneer of inadequate safety requirements. Tennessee will allow restaurants to open again at the start of the week, followed by retail businesses, despite its stay-at-home order nominally remaining in effect through April 30.

The back-to-work drive is by no means confined to Republican-led states. In fact, it is a bipartisan effort. Colorado, Minnesota and Montana, all with Democratic Party governors, have each announced plans to begin opening up businesses this week. Minnesota will “allow” roughly 100,000 agricultural, industrial and office workers to begin working again beginning today, according to the governor’s office. 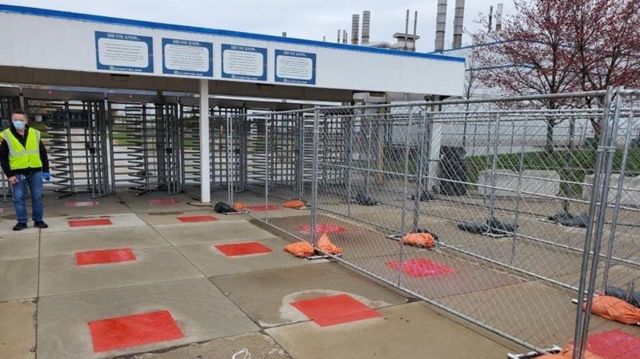 Illinois, whose billionaire Democratic Governor J.B. Pritzker has pitched himself as a rational, science-informed opponent of Trump, is easing restrictions on elective surgeries, retail stores, and garden centers beginning Friday, May 1, despite ostensibly extending the state's stay-at-home order through May 31. Pritzker has indicated that he is “finalizing our next-step principles for safely moving toward reopening in phases.”

While much of the media attention has focused on the states’ plans to reopen parks, beaches, restaurants and small shops, the financial aristocracy is principally anxious to renew large-scale industrial production as soon as possible, if the enterprises were even shut down in the first place. Corporations such as construction and agricultural equipment makers Caterpillar and Deere & Co., by securing a “critical essential infrastructure” designation from the Trump administration, have largely continued to operate during the pandemic, with cases continuing to emerge among factory workers at each company.

In a test run for the broader manufacturing industry, which has been idled in recent weeks, aerospace giant Boeing began production again last week. A significant number of workers, however, boycotted the return to work.

Now, the entire auto industry is gearing up to reopen, with most automakers having a target date of May 4, a little over a week away. Both Ford and General Motors are soliciting workers to return this week and begin prepping factories for a restart. The ramp-up of the immensely complex and globally connected auto industry will entail workers returning not just at assembly plants in the US, but throughout the vast supply chain and logistics networks across North America and beyond.

The frenzied attempt to restart the economy lacks any grounding in science. It is not in response to a decline in cases or a lessening of the danger of the pandemic. On the contrary, despite talking points by the media and government officials about “bending the curve,” the US recorded its largest and second largest number of new cases Friday and Saturday, respectively. As of Sunday, cases in the US were closing in on 1,000,000, and deaths neared 60,000.

Trump’s own health officials continue to warn that testing for the virus remains inadequate. Dr. Anthony Fauci, the top US infectious disease expert, said Thursday, “We need to significantly ramp up not only the number of tests, but the capacity to perform them... I am not overly confident right now at all that we have what it takes to do that.”

Nor is the effort to reopen businesses in response to a population clamoring to get back to work and expose itself to the pandemic, a false narrative manufactured by the political establishment and corporate media. On the contrary, despite the propaganda campaign to shift public opinion in favor of reopening the economy, polls continue to show overwhelming opposition to doing so. A CBS News survey Thursday found that 70 percent agreed the priority should be to “slow the spread of coronavirus by keeping people home and social distancing, even if the economy is hurt in the short term.”

The international character of the capitalist class’ back-to-work drive and the ruthless indifference to the death and suffering that will result were summed up in comments by Wolfgang Schäuble, president of the German Bundestag (parliament), who said, “When I hear that everything else must take second place to the protection of lives, then I say that this absolutism is not correct.”

In virtually every corporate and government communication about restarting the economy, boilerplate phrases are included that the lives and safety of employees and the general population are the highest priority. These are lies. From the first emergence of the pandemic, the ruling class has viewed it not as a global public health emergency requiring that society’s resources be marshalled, but rather as a market disturbance.

In short order, they seized on the opportunity to transfer trillions of dollars to the corporations and banks. However, for this massive reinflation of asset prices to continue, the process of production and the exploitation of workers for profit must quickly recommence.

These views once again found expression in an editorial on Saturday in the Washington Post, owned by billionaire Amazon CEO Jeff Bezos. Under the headline, “We are nearing the end of the beginning of the COVID-19 crisis. Bigger challenges lie ahead,” the editorial board wrote: “Restoring the economy and the health of the nation both are priorities. Neither can be breezily ignored or dismissed. The first requirement is to set reasonable expectations.”

What are these “reasonable expectations?” “It now seems clear that a huge, national wartime mobilization to meet the challenge, which many have suggested, will not take place,” the Post writes.

To put it in plain English, the stenographers for Bezos argue: There will be no large-scale measures to combat the pandemic. Many people will die. Better get used to it, because the economy (i.e., the profit margins of the oligarchy) must be restored.

And while nearly one million have been sickened with COVID-19 in the US and tens of thousands have died, Bezos, indeed, is “making the best of it.” He has increased his fortune by $25 billion since the beginning of the year, according to the Institute for Policy Studies, larger than the gross domestic product of Honduras.

At the same time, the denial of basic personal protective equipment to Amazon and Whole Foods workers, along with millions of nurses, grocery store workers and countless other workers deemed essential, is generating explosive anger and provoking a growing wave of wildcat strikes and other job actions. As the drive to return greater numbers of workers to work accelerates this week, mass struggles are on the agenda.

Workers must reject the false choice being presented to them: that they must either expose themselves to the pandemic or face unemployment and destitution. The drive to restart production at the risk of mass death can and must be opposed.

At every workplace, rank-and-file safety committees must be formed. These organizations must of necessity be completely independent of the trade unions, which, contrary to their own claims to have workers’ safety as their “top priority,” have spent decades enforcing the discipline of management and defending the profit interests of the corporations.

Such committees must raise the demands:

The resources to achieve these demands exist, but they are monopolized by a criminal oligarchy, which is willing to drive society into the abyss in order to defend its wealth and privileges.

The fortunes of the superrich must be seized and redirected toward combatting the pandemic and addressing urgent social needs. The major corporations and banks must be placed under workers’ democratic control. This means the fight for socialism. We urge all those who agree with this perspective to make the decision to join the Socialist Equality Party today.