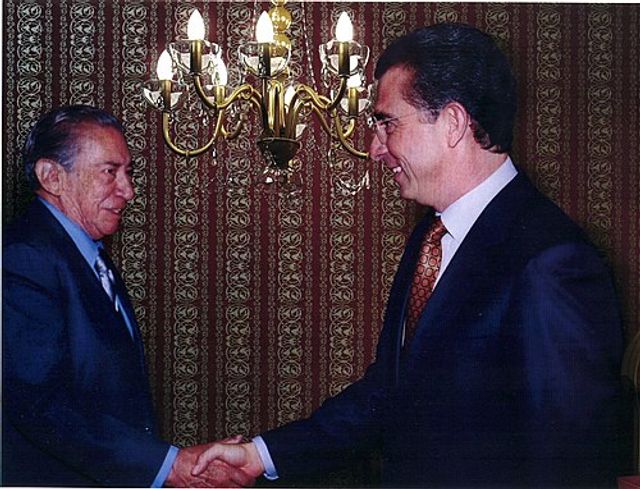 On May 1, 1995, over 100,000 workers marched to the Zócalo, Mexico City’s central plaza, in protest over the economic austerity measures imposed by the government of President Ernesto Zedillo in the wake of the previous December’s peso collapse.

Previously, May Day had been marked in the Mexican capital with rallies by the official Confederation of Mexican Workers (CTM) in support of the ruling Institutional Revolutionary Party (PRI). In 1995, however, the CTM for the first time in 74 years called off the traditional parade for fear that the bureaucracy would prove unable to contain the anger of rank-and-file workers over rising prices and growing unemployment.

The annual inflation rate was forecast at 50 percent and Mexican business organizations estimated that over half a million workers had lost their jobs since the peso devaluation months earlier. A further 250,000 were projected to join the unemployment line before the end of the year.

The marchers were members of smaller independent unions representing teachers, electrical, transport, and other workers, as well as supporters of the bourgeois nationalist opposition, the Revolutionary Democratic Party. Among the marchers were many of the 12,000 Mexico City bus drivers who had just lost their jobs in a violent government union-busting operation. Their employer, the state-run Ruta 100 bus service, was forced into bankruptcy and the leadership of their union, which was not affiliated to the official CTM, was jailed on charges of raising money to support the Zapatista guerrilla movement in the southern state of Chiapas.

50 years ago: Nixon announces US invasion of Cambodia 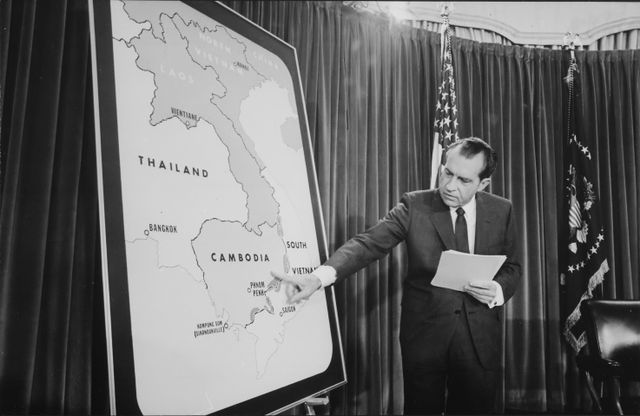 In the evening of April 30, 1970, US President Richard Nixon announced to the American public that US forces in Vietnam had begun an offensive into Cambodia, expanding the massively unpopular war in Southeast Asia into another country. Already, since early 1969, Nixon had approved secret bombing raids into Cambodia and had backed a right-wing coup in March 1970 that establish a military regime in Phnom Penh headed by Lon Nol. The coup triggered the formation of the Khmer Rouge, the military organ of the Cambodian Communist Party, and led to civil war.

Anticipating mass popular opposition to the offensive, Nixon sought to justify it as an attack on North Vietnamese positions within Cambodia, rather than on the country itself. He argued this was, “not an invasion of Cambodia… Our purpose is not to occupy the areas. Once the enemy forces are driven out of these sanctuaries and their military supplies destroyed, we will withdraw.” The president also announced that he would be providing arms to the Cambodian government to shore up the new US puppet regime.

The campaign into Cambodia had in fact already begun when Nixon gave his address to the public. Eventually a force of over 100,000 combined US and South Vietnamese soldiers crossed into the impoverished country and began operations against military installations and supply depots of the National Liberation Front that had been established in the border regions.

The main objective of the United States was to destroy the NLF bases within Cambodia and remove the strategic advantage those bases provided. As was the case with many US operations in Vietnam, the Cambodia offensive was a superficial tactical success but a political and strategic disaster. Using far greater firepower and other military resources, the US was able to inflict heavy casualties on the Vietnamese installations and captured large amounts of military supplies from captured fortifications.

However, the US invasion into Cambodia had major political ramifications throughout Asia and in the United States. Within Cambodia, after abandoning their bases, the NLF was able to pull back their forces and regroup deeper within the country in the areas controlled by the Khmer Rouge. Increasing numbers of Cambodians joined the Khmer Rouge in the civil war as it became evident that the Lon Nol government was merely a stooge of Washington.

Within the United States, protests against the expansion of the war flared up almost immediately after Nixon’s announcement. On college campuses throughout the country demonstrations began on May 1 and continued throughout the week. 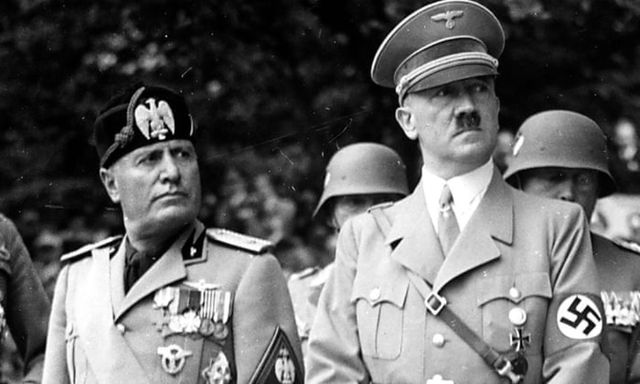 This week in April 1945, the two fascist dictators, Adolf Hitler and Benito Mussolini, met their deaths, as Nazi Germany finally collapsed amid Allied military offensives and social upheavals across Europe.

On April 30, Hitler killed himself inside his military bunker in Berlin as troops from the Soviet Union’s Red Army closed in on the last remaining Nazi holdouts in the city. Over the preceding days, the Red Army had swept through Berlin’s suburbs. The day before his suicide, Hitler had been informed by Nazi military command that the German army would not be able to hold off Allied forces for more than 24 hours. Communications between Berlin and surrounding cities, which were being overrun by the Red Army, had largely been severed.

The regime was in an advanced state of disintegration, as senior figures sought to save themselves. Individuals such as Heinrich Himmler, responsible for some of the worst crimes of the Nazis, reportedly sought to appeal to the Allies as the conclusion of World War II approached.

Hitler’s decision to kill himself, and his request that his body be disposed of, may have been influenced by news of Mussolini’s fate.

The Italian fascist had been the head of a rump German-backed state in northern Italy, dubbed the Italian Social Republic. Mussolini had been ousted as ruler of the entire country more than twelve months before, when dominant sections of the ruling elite turned against him as an Allied invasion made rapid ground and mass opposition increasingly came to the surface.

On April 25, Mussolini and his mistress sought to escape for Switzerland, after it became clear that their government would be overthrown by approaching Allied troops. They were detained two days later by partisan and Allied forces. On April 28, both were summarily shot. The bodies of Mussolini, his mistress, and 13 other fascist criminals were taken to Milan, where they were hung upside down and jeered by crowds of hundreds of thousands of workers.

In the course of their reigns, the two dictators were responsible for the deaths of countless millions, including at least six million Jews killed during the Holocaust, tens of millions in the world war, and hundreds of thousands of others, from Roma, to the disabled, to masses of socialists and communists.

The demise of both tyrants was greeted with jubilation by millions of workers around the world. Their downfall occurred in the week of May Day, the global revolutionary holiday of the international working class. Mass demonstrations took place throughout Europe and around the world.

The Fourth International, the world Trotskyist movement, noted that its sections alone had carried out an unstinting struggle against fascism, and not the “democratic” imperialist powers, which had embraced Hitler and Mussolini during their rise to power, nor the Stalinist regime in Moscow that attempted to work out a quid pro quo with Hitler in the Molotov-Ribbentrop pact of 1939. It warned against the attempts of the Allied powers and their Stalinist allies to restabilize capitalism and prevent the socialist aspirations of anti-fascist workers from developing into a challenge against the profit system responsible for the barbarism of the previous years. 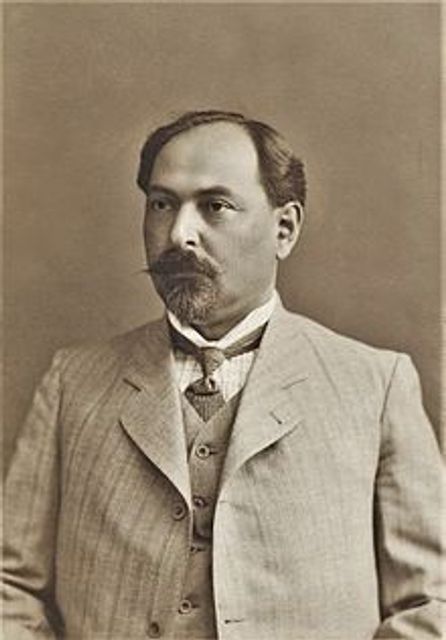 On April 28, 1920, the Provisional Revolutionary Committee, led by Bolshevik leader Nariman Narimanov, declared the establishment of the Azerbaijan Soviet Socialist Republic after an uprising of workers in the capital of Baku and the military defeat of the forces of the bourgeois Azerbaijan Democratic Republic (ADR) by the 11th Red Army.

Baku was a center of the oil industry and a multinational city with Azeri, Armenian, Iranian, and Russian workers. In the first half of 1918, Baku had been governed by the Baku Commune, organized by the Bolsheviks and their leftist allies. The commune was overthrown by a coup d’état of Menshevik, nationalist and Social Revolutionary forces in July who allowed the occupation of the city by British troops.

By September 1918, the troops of the Turkish Ottoman Empire, with the assistance of local Islamist forces, drove out British troops and put it under the control of the ADR, which had been established in the spring outside of Baku. The ADR oversaw the massacre of up to 20,000 Armenians in Baku.

The ADR was undermined by the emergence of the Turkish national movement led by Kemal Ataturk, which had established diplomatic relations with Soviet Russia, as well as enduring support for the Bolsheviks in the working class, especially among the oil workers.

The establishment of Soviet Azerbaijan was a milestone in the liberation of the Muslim peoples oppressed by the Tsarist empire. The new socialist regime had a great impact on the oppressed peoples of the Middle East, especially in Iran. In September 1920, the Bolsheviks organized in Baku the famous Congress of the Peoples of the East, which declared a “holy war” against British imperialism.