Prior to its belated introduction of a COVID-19 lockdown, Boris Johnson’s government allowed three major sporting fixtures to go ahead in different parts of the UK. They were attended by nearly 400,000 people.

It was only on March 23—25 days after the first UK coronavirus death—that the Conservative government finally announced that people should confine themselves to their homes, and only leave for essential shopping, travelling to work or for permitted exercise. All mass gatherings were prohibited.

Prior to the lockdown, the government had been actively pursuing its herd immunity policy, which depended on the mass infection of millions of people with a deadly virus. Chief Science Advisor to the government, Sir Patrick Vallance, said on March 12, alongside Johnson in Downing Street, “It’s not possible to stop everyone getting it and it’s also not desirable because you want some immunity in the population to protect ourselves in the future.”

It was only due to growing opposition, including from scientists, that the government was forced to impose a lockdown. But much of the damage had already been done, as can be seen from growing evidence, including the horrific consequences of allowing the three sporting events to take place. 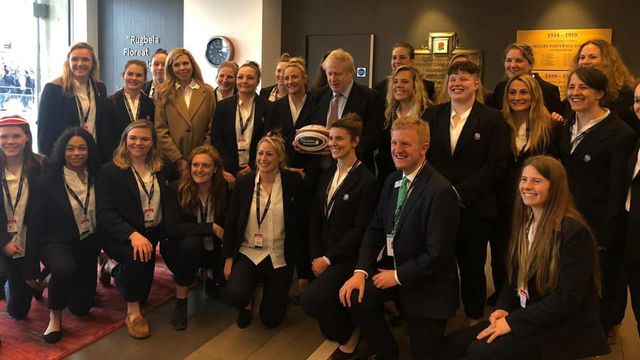 On March 7, England played Wales as part of the Six Nations international rugby union competition at Twickenham in south London. It attracted a crowd of over 81,000. Fans travelled from Wales and many other parts of the UK to attend the match.

It went ahead even though by then over 160 people in the UK were known to have contracted COVID-19. The rugby match between Italy and England due to take place in Italy the following weekend was postponed because of fear of spreading the COVID-19 epidemic. The epidemic was raging throughout Italy at that time and the Johnson government knew the UK was only a matter of weeks behind the same scenario.

Johnson and his pregnant partner, Carrie Symonds, attended the England-Wales game and Johnson later posted a picture on his Facebook account of himself rubbing shoulders with members of the women’s team.

The Cheltenham horse racing festival in Gloucestershire in southwest England was allowed go ahead from March 10 to 13. Crowds of over 60,000 attended each day, with more than 68,000 on the prestigious Gold Cup event on the festival’s final day. Over the four days, attendance reached a quarter of a million. Racegoers travelled from all over the UK and Ireland.

According to Jockey Club statistics on the meeting, nearly 135,000 people used the Cheltenham Spa rail station over the four days and 80,000 used the shuttle bus service between the racecourse and the town centre. Some racegoers attended the whole four days and used accommodation and hospitality facilities in the Cheltenham area.

The organisers used Johnson’s presence at the Twickenham rugby match just three days earlier to justify going ahead with Cheltenham. A letter to Cheltenham borough council was quoted in the Guardian April 8. It read, “As with events from England v Wales attended by the Prime Minister at Twickenham on Saturday to 10 Premier League games around the country this weekend, the government guidance is for the business of the country to continue as usual…”

Johnson and his partner subsequently both contracted COVID-19, with the prime minister nearly losing his life and requiring three days of intensive care. Johnson was rushed into hospital on April 5 after reporting that he had suffered with symptoms of the virus for the previous 10 days—meaning that he first got infected on or before March 26.

A report on the Canary news website of April 23, based on “leaked official data” in the form of a map of postcodes in the Gloucester area, showed high incidents of COVID-19. In the GL52 post code area, covering an area north of Cheltenham, as of April 3 there were 27 admissions to hospital for COVID-19. This represents the biggest concentration of the disease throughout the county of Gloucester.

The data for the GL51 post code, which includes Cheltenham Spa railway station, was the second highest. Up to April 3, the two postcodes represented a quarter of all the confirmed COVID-19 cases in the county of Gloucester.

Speaking to the BBC, the former director of public health in the southwest, Professor Gabriel Scally said, “Really from a health point of view [it] should have been stopped in advance.”

The Gloucestershirelive website noted that as of April 22, “Gloucestershire is currently the most affected county in the least affected region the South West—in Great Britain with 989 cases of the virus and 147 deaths in the county…”

The Daily Mail on April 25 noted the death from COVID-19 of Alexander Grierson, 67, a landlord who had served drinks at his pub near the Cheltenham racecourse throughout the four days of the festival.

Recent figures published by the Health Service Journal show that Gloucestershire’s National Health Service trust recorded 125 deaths from COVID-19, whereas two trusts in nearby Bristol recorded 58 each. Other nearby trusts, Swindon and Bath, recorded figures of 67 and 46.

The Tory government has tried to downplay the figures, highlighting the relatively low figures for the southwest region. Culture Secretary, Oliver Dowden, declared, “The risk at mass gatherings was no greater or less than it would have been in pubs or restaurants, and the advice at that point was that we did not need to ban mass gatherings.”

Professor John Ashton, a former director of public health in Cumbria, has joined calls for an official inquiry into why the go ahead was given for the race festival. He said, “It’s important we learn about what the potential is for coronavirus transmission at public events.”

On March 11, a Champions League football match between Liverpool and Spanish side Atletico Madrid took place at Liverpool’s Anfield ground. It was the last major football match played in Britain before the lockdown.

The match was attended by 52,000 fans, including 3,000 who had travelled from Madrid—with many wearing facemasks. At the time, Spain had already brought in a partial lockdown. Spain has among the highest number of COVID-19 cases in the world, with Madrid the worst affected city. On the same day as the Liverpool-Madrid match, the Spanish La Liga ordered all domestic matches to be played behind closed doors, with the government having ordered schools closed the day before.

Liverpool Mayor Steve Rotherham is calling for an independent inquiry into why the match went ahead. He noted, “We’ve seen an increase in the infection curve (resulting in) 1,200 people contracting COVID-19.”

On March 20—nine days after the match—according to Public Health England there were just 14 confirmed cases of COVID-19 in Liverpool. A week later the Liverpool Echo reported “regular jumps in cases each day and as of yesterday (March 26) the city’s total stands at 72.” Liverpool overtook Manchester, a similar sized city just 34 miles away, which had recorded 55 cases by that time.

By Monday this week, Liverpool University NHS Trust—covering the Royal, Broadgreen and Aintree hospital—had reported 294 deaths. The Liverpool Heart and Chest Hospital Trust has recorded 16 deaths and the specialist neuroscience Walton Centre five deaths. By April 25, over 300 people have died on Merseyside as a result of the disease. In the wider northwest area of England, 2,749 people had died of coronavirus by April 27.

Speaking on the day of the match, Dr. Jenny Harries, deputy chief medical officer in England, said, “Those sorts of events and big gatherings are not seen as something which is going to have a big effect.” This was the same day the World Health Organisation was urging the UK to bring in tougher measures to fight the spread of the disease. Liverpool director of public health Matthew Ashton told the Guardian April 2, “It was not the right decision to stage the match.”

Speaking at the government’s daily coronavirus press conference on April 20, deputy chief science adviser Angela McLean conceded there should be an investigation into the consequences of the match going ahead.