The Trump administration authorized a series of military flyovers of jet fighters and bombers, dubbed “Operation America Strong,” this week as a purported salute to health care workers and first responders during the disastrous coronavirus pandemic. Millions of dollars are being spent “honoring” the very men and women the administration still has not provided with adequate personal protective equipment (PPE).

“Operation America Strong was the idea of our great military men and women,” Donald Trump said during a White House press briefing last week. “The Thunderbirds and the Blue Angels crews who wanted to show support to the American medical workers who, just like military members in a time of war, are fiercely running toward the fight.”

On Tuesday, the Navy’s Blue Angels and the Air Force’s Thunderbirds—elite military flight squadrons—flew in a “collaborative salute” over New York, New Jersey, and Pennsylvania. Twelve jets, including half a dozen of the Air Force’s F-16C/D Fighting Falcons and six F-18 C/D Hornets, sped over New York City and Newark before heading to Philadelphia. Additionally, a B-2 Spirit stealth bomber, four T-38 Talons and two A-10 Thunderbolt 11s streaked over Kansas City. 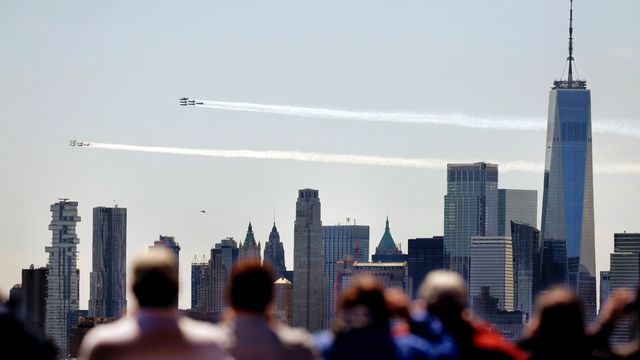 People watch as a formation of the Blue Angels and Thunderbirds flight teams pass in front of the New York City skyline as seen from in Weehawken, N.J., Tuesday, April 28, 2020. (AP Photo/Seth Wenig)

A formation of two B-1B Lancers is scheduled to conduct a salute on Friday, May 1, over the Fort Meade VA Hospital in Sturgis, South Dakota, another VA hospital in Hot Springs, and Monument Health Medical Facility in Rapid Springs. A four-ship formation of a B-52 Stratofortress accompanied by F-15 Eagle fighters is expected over New Orleans and Baton Rouge as well.

The Thunderbirds carried out salutes over Las Vegas on April 11 and metropolitan areas in Colorado on April 18.

Trump’s use of military grandeur and its expense have drawn sharp criticism. According to figures gathered by Military.com, operating an F-16 fighter jet costs $20,423 per hour. Flying a B-52 bomber runs about $48,000 per flight and $94,000 for a B-1B Lancer. A B-2 stealth bomber costs a staggering $122,000 per hour of flight. In other words, the average cost of flying one of these planes could pay at least one nurse’s salary for a year.

The expensive display, which was over in the blink of an eye, provoked angry denunciations on Twitter:

“I’m a R.N. You can thank us by fully funding the hospitals. Telling us to attempt to self sterilize used PPE while spending millions on the Blue Angels flyovers is insulting.”

“Stay home and quit billing the taxpayers $60,000 an hour per plane. The healthcare workers are committing suicide in NY and you’re a loud distraction.”

“How about we not lay off and furlough of nurses and doctors to honor them instead!!!”

“What a waste of money during a national crisis. I’m sure the nurses wearing garbage bags will be impressed. I’m a Navy vet, and I’m ashamed.”

The Pentagon has defended the demonstrations by stating the funds going toward operating the formations are money already allocated to the Department of Defense and entail “no additional cost to the taxpayer.” Air Force Global Strike Command spokeswoman Carla Pampe told reporters the flyovers also serve as an opportunity to train pilots to “maintain readiness.”

“This is an opportunity for the Air Force to [safely] salute the Americans who are selflessly supporting our communities during this trying time while also conducting needed training,” Pampe said.

Even if one concedes to the fact that no additional taxes were levied to fund the military displays, the trillions of dollars allocated to the US war machine are resources stolen from health care infrastructure and social programs. Each hour of the multi-plane salutes could produce dozens of life-saving ventilators. Instead, the American ruling class is merely offering “symbolic” support to those dying to save the lives of others, with the added benefit of training fighter jet pilots.

The absurdity of the situation is magnified when one considers the destructive history that US imperialism and its allies have of flying planes over hospitals in the Middle East. On October 3, 2015, a US-led airstrike decimated a Doctors Without Borders/Médecins Sans Frontières (MSF) medical center in Kunduz, Afghanistan. More than 30 people were injured and 42 killed including 10 patients, three children, and 12 members of the MSF. On March 26, 2019, a US-backed coalition led by Saudi Arabia dropped US-supplied bombs on a hospital in Yemen, killing at least seven including four children.

In the background of Operation America Strong, the Trump administration is spearheading the campaign to send people back to work, which will ensure an increase in medical patients suffering from COVID-19 and the deadly toll on health care workers. Trump, in collusion with the media, is utilizing all of the forces at his disposal to force workers back into unsafe working conditions.

Hospital workers nationwide have insisted they be provided with proper PPE and that the economy not be prematurely opened, despite warnings against it by multiple medical experts and officials. The ruling elite have dictated vast sums of money be allocated to fuel the rise of the stock markets while the majority of the population are left empty-handed.

The fight against war