In the US as of Thursday evening there were nearly 1.1 million cases of COVID-19 and nearly 64,000 deaths. More than half of these deaths have taken place in just the past two weeks. Globally, cases have risen to over 3.3 million, with 234,000 deaths. This means that more than a quarter of all deaths have been in the US.

Despite the daily rising figures, at least 31 US states will be easing social distancing measures over the next few days, allowing some businesses, restaurants, malls and public places to reopen. While the loosening of restrictions varies from state to state, none of these states has met even the Trump administration’s weak “advisory” on reopening, which said states should wait for COVID-19 cases to decline for 14 consecutive days before the reopening process begins.

A study by the Center for Infectious Disease Research and Policy (CIDRAP) at the University of Minnesota predicts that the novel coronavirus is likely to keep spreading for at least another 18 months to two years, until 60 to 70 percent of the population has been infected. The study authors recommend that the US prepare for a worst-case scenario that includes a second big wave of infections in the fall and winter. 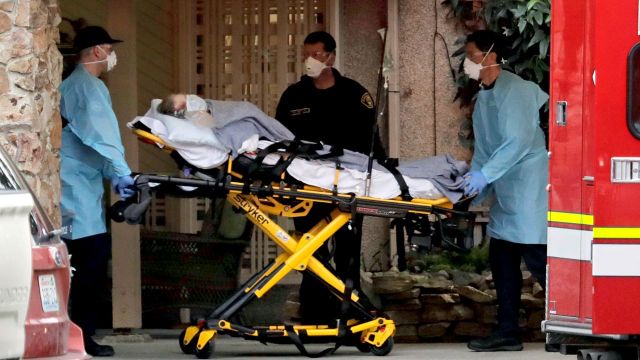 Mike Osterholm, who directs CIDRAP, told CNN, “The idea that this is going to be done soon defies microbiology.”

Director of the National Institute of Allergy and Infectious Diseases Dr. Anthony Fauci warned Thursday that states need to proceed carefully as they roll back restrictions. “When you pull back there will be cases, and what we need to do is make sure [states] have in place the capability of identifying, isolating and contact tracing individuals,” he said.

However, President Donald Trump—with his approval rating for his handling of the crisis falling to a record low of 43 percent according to a new Morning Consult poll—is promoting a reckless and criminal policy, placing the health and lives of countless millions of Americans in danger. The White House policy is based not on the health of the US population, but on boosting Wall Street and filling the coffers of the giant corporations.

Federal guidelines encouraging people to social distance, in place for 30 days, were allowed to expire Thursday after Trump indicated he did not intend to extend them. Referring to the restrictions, the president told reporters Wednesday, “They’ll be fading out, because now the governors are doing it.”

In one of the nation’s most wide-ranging moves, Texas Governor Greg Abbott, a Republican, is allowing retail stores, restaurants, movie theaters and malls to reopen at 25 percent capacity. Beaches in Galveston will be allowed to open. In Alabama, Republican Governor Kay Ivey allowed many retail stores as well as beaches to reopen Thursday, while in Maine, Governor Janet Mills, a Democrat, will allow barber shops, hair salons and pet groomers to reopen beginning Friday.

However, many of the most populous states, including California, Michigan, New York and Illinois, are continuing their extended shutdowns. In California, Governor Gavin Newsom, a Democrat, ordered Orange County beaches to stay closed after residents flocked to beaches during last weekend’s high temperatures.

Deaths from COVID-19 in Massachusetts have gyrated in the 100 to 250-a-day range, with no indication that the “curve” has begun to flatten. New Jersey recorded 458 new virus-related deaths on Thursday, the most that the state had reported in a single day since the pandemic began. New York recorded 306 new deaths Thursday, as the death numbers very slowly decline. The state’s death toll has risen to a staggering 23,780, more than one third of the US total.

As the battle plays out over the reopening of major cities and more populated states, many sparsely populated areas of rural America are seeing a rapid rise in COVID-19 cases. Many of the hospital systems in these areas are ill-equipped to deal with a sudden surge of cases, and the lack of testing has not provided a roadmap for local health officials to prepare.

Despite the rural settings, many people in these areas work in large-scale industries, such as food processing. Angela Hewett, associate professor in infectious disease at the University of Nebraska Medical Center, noted in a recent briefing of the Infectious Diseases Society of America that one of the reasons the virus is rising is because it is running rampant among workers in factories and farms. “These are not places where typically people can work from home,” Hewett noted.

The Dartmouth Atlas Project tracks the top 10 regions with the fastest growth rates in COVID-19 cases. It finds that these are primarily in metropolitan areas with large-scale factories, located primarily in rural states. The project aggregates county-level data to form 306 geographical areas known as “hospital referral regions,” i.e., where people get their health care.

The Chartis Group reports that 63 percent of rural hospitals don’t have intensive care unit (ICU) beds. Many rural hospitals have lost a substantial portion of their income due to the suspension of outpatient services and face financial ruin and shutdown, leaving communities without a local hospital. If the models of epidemiologists prove true, peaks of COVID-19 in rural areas may still be weeks away. The drive to reopen states and relax social distancing places vulnerable populations in these areas in extreme peril.