The workers included bartenders, poker dealers and housekeepers furloughed by Atlantic City’s casinos. In less than three hours, 1,500 emergency meal kits were handed out, each one intended to feed a family of four for two weeks. Local police estimated that 1,500 drivers were waved away empty-handed.

In New Jersey, as in the rest of the US, need has increased sharply as workers have lost their jobs and used up their savings. The Community Food Bank of New Jersey is providing food to 2,500 families per week, compared with 1,000 per week before the pandemic. The Food Bank of South Jersey has reported that need has doubled. Demand has increased by 50 percent in Newark, the state’s largest city, and one of the poorest. About 930,000 New Jersey residents, out of a population of almost 9 million, have filed for unemployment insurance as of April 30. Outdated computer systems at unemployment offices are crashing, and tens of thousands of workers are waiting weeks without receiving checks. 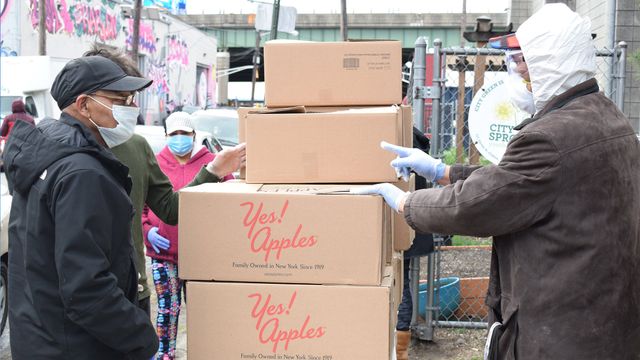 Hundreds of people receive food from a walk and drive up distribution by Community FoodBank of New Jersey (Image credit: Twitter/CFBNJ)

New Jersey is the second-wealthiest state in the US, and has the second-highest per capita population of millionaire households, about one in 12. The state is home to nine billionaires.

The state has been hit hard by the pandemic. As of May 3, New Jersey had at least 127,438 cases of the novel coronavirus, including at least 7,886 deaths. These totals surpass those of any state except New York, which has more than double the population. Infections have been concentrated in the northern part of the state, which is closest to New York City, the epicenter of the pandemic in the US.

At least 25 health care workers in New Jersey, including nurses, emergency medical technicians and physicians, have died as of May 1. These workers have faced widespread understaffing and shortages of personal protective equipment (PPE) at their clinics. In addition, at least two employees of New Jersey Transit, which runs the state’s rail and bus lines, have died of COVID-19. Joe Hansen, a train conductor for 20 years, and Philip Dover, a bus driver with 24 years’ experience, both died in April.

In his regular public briefings during this crisis, Governor Phil Murphy, a Democrat, has presented himself as a sober leader who bases his decisions on data. The facts, however, show otherwise. Murphy has vowed to double the number of coronavirus tests performed each day in the state by the end of May. But achieving this feat will neither be easy nor by any means sufficient. An analysis by Harvard University and health news service STAT indicates that New Jersey, which currently administers between 7,000 and 9,000 tests per day, would need to increase the rate to 75,405 tests daily before it can reopen its economy safely. A Rutgers University researcher who reviewed the analysis suggested that the state could need an even higher testing rate, since the state’s positive-test rate and mortality rate are higher than the nation’s averages.

Despite New Jersey’s clear lack of readiness, Murphy already has begun relaxing restrictions put in place to prevent the spread of the virus. State and county parks and golf courses reopened on May 2, although residents are required to practice social distancing. Murphy, a multimillionaire and former Goldman Sachs executive, has taken these steps to prepare for a premature statewide return to work, thus aligning himself with other Democratic governors, such as Andrew Cuomo of New York, and Republican President Donald Trump. If he decides that the resulting number of new infections and deaths is acceptable, he will consider further relaxing restrictions. “So, let’s do this together, folks,” Murphy said, in language that obscures the fact that only workers’ lives, and not those of the state’s corporate and financial elite, are at risk.

Who are the “folks” who are advising Murphy? On April 28, the governor announced the members of his Restart and Recovery Commission. The roster reads like a who’s who of corporate and financial magnates. A co-chair of the commission is Kenneth Frazier, chair and CEO of Merck, one of the pharmaceutical giants with facilities in the state. Other members include Ben Bernanke, former chair of the Board of Governors of the Federal Reserve; Lisa P. Jackson, a vice president at Apple; and Charles Lowrey, chair and CEO of Prudential.

Erstwhile federal officials such as Jeh Johnson, former secretary of the US Department of Homeland Security, and Neera Tanden, who worked for the Clinton and Obama administrations, are also on the commission. Rounding out the list is Richard Trumka, president of the AFL-CIO. Murphy did not choose these individuals for their experience in public health, but because they occupy the heights of the capitalist economy, the state, or have experience in policing the working class.

New Jersey and the businesses based there will use the pandemic as an excuse to intensify the assault on workers’ pay and benefits. On April 29, S&P Global Ratings changed its credit outlook for New Jersey to negative. It concluded that revenue losses made it likely that the state would delay or cut its contribution to the public pension system, which has been criminally underfunded by administrations of both major parties for decades. S&P’s revised rating follows downgrades from Fitch Ratings and Moody’s Investors Service.

Murphy has gotten the banks’ message. He has put a hold on $920 million in discretionary spending, including $142 million earmarked for property-tax relief, $45 million in aid to municipalities, $70 million for fighting opioid addiction, and $9 million for lead-abatement programs. Withholding funds for lead-abatement programs is particularly scandalous, considering the ongoing contamination of the water supply to cities such as Newark, Trenton, Irvington, East Orange, and Atlantic City, which have all suffered decades of economic decline.

In addition, Murphy delayed the implementation of a law that would have required big companies to pay severance when they carry out mass layoffs. These measures, and the budget cuts that surely will follow, show the Murphy administration’s hostility to the working class. The only data on which Murphy bases his policies are the bottom lines of the state’s banks and corporations.