25 years ago: 104 killed in South African mine disaster 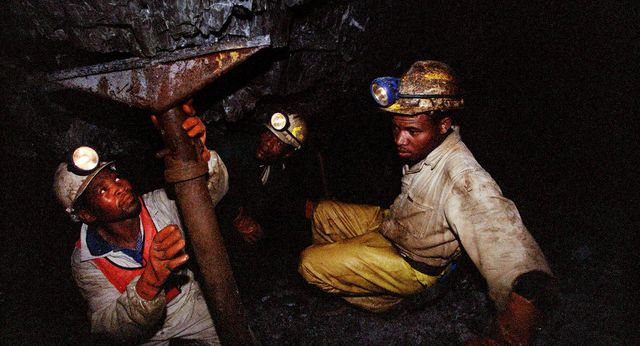 On May 10, 1994, 104 miners were killed in the Vaal Reefs gold mine in Orkney, one of South Africa’s largest gold mines. The elevator bringing the miners to the surface of the mile-deep mine was crushed by an underground train which had fallen down the shaft. The two-story elevator at Vaal Reefs was compressed into one by the force of the collision. The majority of the miners killed were immigrants from Mozambique, Lesotho and Botswana.

Both Anglo-American, the huge mining conglomerate which owned the Vaal Reefs Mine southwest of Johannesburg, and South African government officials sought to blame negligence by the underground train driver for the disaster.

Energy and Mineral Affairs Minister Roelof Botha, one of the holdovers from apartheid rule in Nelson Mandela’s cabinet, said: “It is clear in this accident that the human factor must have played a role.” Seeking to place blame on the driver, the statement continued: “The locomotive could not have moved as it did had it been properly controlled … The driver is alive so he must have either jumped out of the locomotive or in any event was not in it.”

Mining was South Africa’s largest industry and gold the most profitable product. The Vaal Reefs mine was at that time the country’s second largest, with $845 million in output the previous year. The Mandela government reneged on promises of the nationalization of gold and diamond mines, leaving companies like Anglo-American free to coin profits out of low-paid mine workers.

Between 1909 and 1994, 69,000 miners had been killed and a further 1 million injured in South Africa. The Vaal Reef disaster followed by a little more than a decade the September 1983 methane explosion at Hlobane Colliery, which killed 64 miners, and by two years the May 1993, disaster in the Middelbult coal mine in Secunda, southwest of Johannesburg, which took 53 miners’ lives. 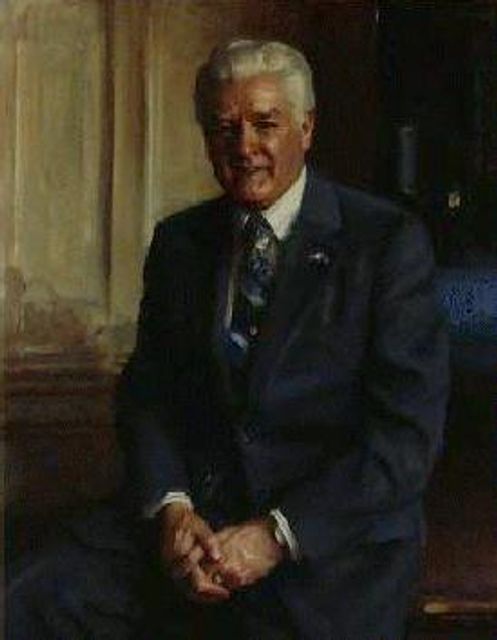 Peter J. Brennan's portrait as US Secretary of Labor

On May 8, 1970, about 200 right-wing workers and union officials attacked a group of about 1,000 high school and college students who had gathered at New York City Hall to protest the expansion of the Vietnam war into Cambodia and the killing of four students at Kent State University by the National Guard.

The student-led antiwar demonstrations began on the morning of a Friday workday with students demanding an end to the war and to all military-related research on university campuses. Around noon, construction workers wearing hard hats and carrying American flags arrived and began attacking the students with clubs. The police, who were aware ahead of time that the counter-demonstrations would take place, were on the scene but allowed the students to be beaten without interfering.

The mob would eventually storm city hall and force the raising of the flag, that had been lowered to half-mast in the wake of the Kent State killings, to be returned to full height. By the time the riot concluded, over 70 students were injured and required hospital treatment. Only six arrests were made.

The “Hard Hat Riot” as the event became known, was carried out under the influence of the Peter J. Brennan, president of the Building and Construction Trades Council of Greater New York. Brennan was a political crony of Nixon and would be selected to serve as his secretary of labor in 1973.

Nixon and his allies like Brennan hoped that by mobilizing some of the more backward and reactionary elements in the unions, handpicked by the bureaucrats, students could be intimidated from agitating among workers. Behind this was a more crucial aim—to separate, to the extent possible, a mounting strike wave by workers from taking on a consciously antiwar and anti-capitalist political character.

The Workers League, the American predecessor of the Socialist Equality Party, sought to clarify the issue to the workers and students in an open letter published in The Bulletin. The statement declared, “The hundreds of workers who demonstrated in open support of Nixon and Agnew, the Vietnam War, and the ‘establishment’ were, whether they know it or not, coming out for their bitter enemies and for cutting their own throats.”

As news of the attack spread, students and anti-war workers expressed an even deeper desire to protest against the war. May 8th saw massive demonstrations in Washington D.C. of over 100,000, and 150,000 turned out in San Francisco the same day. The National Guard was called out against students on 21 different campuses across the country. 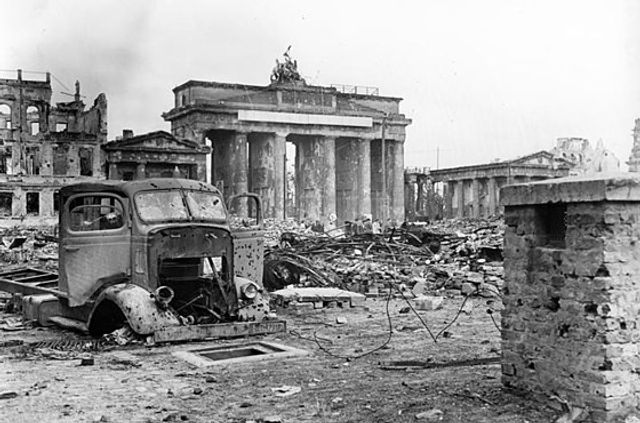 The Brandenburg Gate in the ruins of Berlin, June, 1945

On May 8, 1945, senior German military commanders representing the three branches of the German armed forces signed a formal instrument of surrender in Berlin, in front of Soviet, British, US and French military and civilian officials. The defeat of the Nazi Third Reich heralded the end of the Second World War in Europe.

The surrender followed the seizure of Berlin by the Soviet Red Army. The battle for the German capital had involved two weeks of brutal close-quarters combat, as Soviet troops fought to oust Nazi troops from fortified positions throughout the city.

German dictator Adolf Hitler committed suicide in his Berlin bunker on April 30 after being told the defense was hopeless. On May 2, the city’s main garrison surrendered. Contingents of some military divisions continued to fight until May 8 in the west, northwest and southwest of Berlin. At the end of the battle, large sections of the city lay in waste after the massive use of artillery shells and aerial bombardment. British and American planes had dropped an estimated 75,000 tons of bombs on the city.

The May 8 signing followed a similar ceremony at Reims in northern France the day before, at which General Alfred Jodl, the chief of operations staff of Germany’s armed forces, had signed an unconditional surrender. The event, taking place at a residence of Allied US commander Dwight D. Eisenhower, was seen by elements of the Red Army as an attempt to downplay the central role that the Soviet Union had played in the victory. This, combined with the fact that only two of the three branches of the German military were represented in Reims, further necessitated the Berlin signing.

In early June, the Allies would issue a declaration formally dissolving all civilian governmental authorities throughout Germany. Over the ensuing weeks and months, the Stalinist Soviet bureaucracy worked closely with the capitalist Allied governments to prevent mass anti-fascist sentiment throughout the continent from developing into a revolutionary socialist struggle against the profit system.

100 years ago: Sacco and Vanzetti arrested in Massachusetts 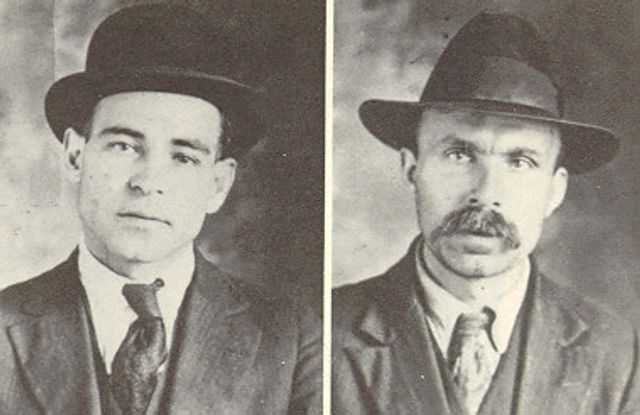 On May 5, 1920, Nicola Sacco and Bartolomeo Vanzetti, Italian immigrant workers and anarchists, were arrested in Bridgewater, Massachusetts, accused of the April 15 armed robbery of the Slater and Morrill Shoe Company’s payroll boxes in Braintree, south of Boston, and the murders of paymaster Frederick Parmenter and security guard Alessandro Berardelli.

The two men were apprehended by Bridgewater police after they accompanied a suspect in the crime, Mario Buda, also an anarchist, to a garage where a car that police suspected was used in the crime was being repaired.

Their arrest and subsequent trial would lead to one of the greatest labor defense cases of the 20th century, which was to spark mass protest in the US and throughout the world.

The United States in 1920, along with much of the rest of the world, was in a ferment of working-class militancy. The Russian Revolution of 1917 had sparked revolutions in Germany and Hungary and awakened anti-colonial movements in India, the Middle East, and in East Asia. In 1920, the young Soviet regime in Russia had defeated invasions by imperialist armies and had beaten the counter-revolutionary forces seeking to reestablish capitalism.

The steel and coal industries in the US had seen hundreds of thousands of workers out on strike. Workers had engaged in general strikes in Seattle and Winnipeg. In 1919 a Communist Party had been founded in the United States, and the Communist International in Moscow began to prepare the working class for world revolution.

Sacco and Vanzetti were arrested as a part of a vicious anti-anarchist and anti-socialist wave of persecutions, known as America’s first “Red Scare,” that the US government had begun in 1919 in response to the development of working-class struggle. In previous months, the Bureau of Investigation, led by J. Edgar Hoover, had arrested thousands of foreign-born socialists, Communists and anarchists, raided socialist meetings and deported hundreds.

Sacco and Vanzetti were to go on trial in September, shortly after a bomb on Wall Street had killed 30 people.

James P. Cannon, the future founder of the American Trotskyist movement, who was to lead the defense campaign on behalf of the International Labor Defense, developed by the Communist Party, outlined the class character of the movement against the frame-up at a speech in Chicago in 1927: