Scientists set up independent committee to challenge UK government’s COVID-19 response: “there is no transparency”

A group of prominent scientists—including epidemiologists, virologists and public health experts—have challenged the Johnson government’s misuse of scientific evidence, including that used to justify ending lockdown restrictions and ordering a return to work.

The group was established by Professor David King, former chief scientific advisor to the UK government, and Professor Anthony Costello, professor of Global Health at University College London and former director of maternal, child and adolescent health at the World Health Organisation (WHO). The scientists have convened an alternative scientific advisory panel to rival the government’s official Scientific Advisory Group on Emergencies (SAGE). 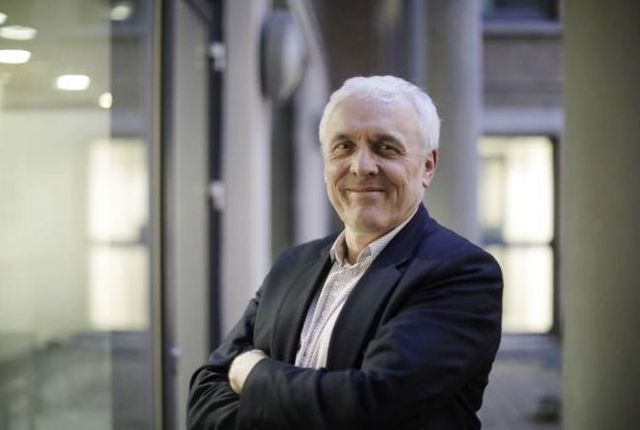 The SAGE committee has come under intense public criticism due to the influence wielded by political figures, including Prime Minister Boris Johnson’s chief advisor, Dominic Cummings, a vocal advocate of the “herd immunity” policy adopted by the government.

Other SAGE committee participants are Ben Warner, a Downing Street data scientist and political ally of Cummings on the Brexit Vote Leave campaign. Warner previously held a leading position in Faculty, an artificial intelligence company run by his brother Marc Warner, which has a government contract for data-mining related to the coronavirus outbreak.

Demis Hassabis, co-founder of DeepMind, Google’s artificial intelligence division is a key industry figure working with SAGE. Hassabis was invited to attend SAGE by the government’s chief scientific adviser, Sir Patrick Vallance—meaning that Google could have access to its discussions and findings when the public does not.

In addition, 16 of the 23 SAGE members publicly identified were known to be employed by the government.

Speaking yesterday morning on BBC radio’s Today programme, King, who served as chief scientific advisor to the Blair and Brown Labour governments from October 2000 to December 2007, was asked to justify his call for an independent advisory group aimed at delivering “robust, unbiased advice.”

“We don’t know what advice is coming from the scientists on SAGE into the government,” he told the BBC’s presenter. “[T]here is no transparency in the process. When ministers say they are simply following scientific advice, we, the public, don’t have any check on that.” 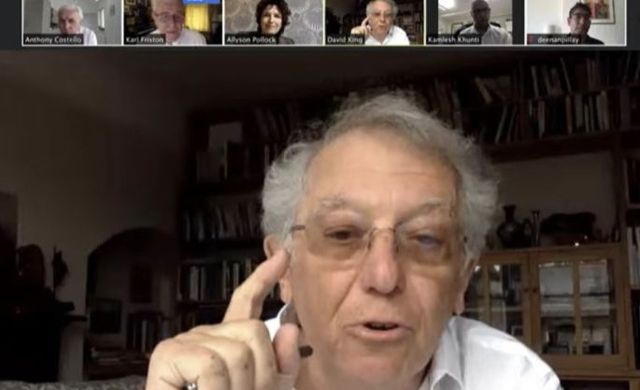 Asked whether scientific advisers were deferring to ministers, King replied, “I believe that’s the case, yes. I think there’s a very big difference between the situation today and the situation as it was in 2010-11. That is quite simply the permission to speak in the public domain has been changed.”

Earlier, King had cited government claims to be “following the science advice all the way” over its policy on face masks. The government does not recommend their use except by medical and care workers, with King replying, “There’s plenty of evidence to indicate that the wearing of face masks is a major help in reducing person-to-person vital transfer.” King commented, “I wonder whether that decision, apparently by Sage…was driven by the necessity of not requiring it because we don’t have the face masks available in this country. That’s a political issue. My advice would always be that face masks are required and that if we don’t have them, you need to see we acquire them for the people at large.”

At 12 p.m., the scientists launched Independent SAGE with a meeting livestreamed on YouTube. Chaired by King, the meeting was attended by 12 scientists including King; Costello; Martin McKee, professor of European Public Health at the London School of Hygiene and Tropical Medicine; and Gabriel Scally, president of the Epidemiology and Public Health section of the Royal Society of Medicine.

The launch was reported by some media outlets early Monday morning, but the content of the subsequent livestream discussion was barely referred to throughout the day. Sky News broadcast the livestream shortly after 12 p.m., but abruptly cut the feed after around 11 minutes. 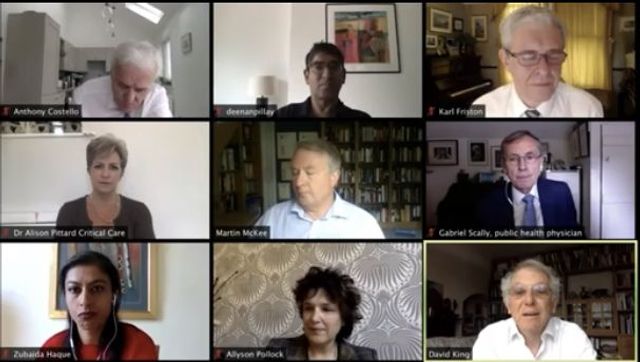 The livestreamed meeting ran for two hours and 40 minutes, with differing views among scientists on a range of topics. The Johnson government was challenged, however, on several key points with major implications for public health:

The most important discussion during the conference call focused on the criteria being used by the Johnson government to end the lockdown. Professor Costello showed a graph demonstrating how the UK government’s criteria for organising a return to work conflict with World Health Organisation guidance:

Speaking of the UK government’s criteria (displayed in the right-hand column, above), Professor Costello noted, “This still feels to me like a managed spread option [i.e., they are saying] ‘this is a pandemic, we can’t stop it, it’s spreading through the population but in a managed way’.”

Professor Costello explained that WHO’s guidance was focused instead on prevention: “WHO’s advice—daily for the last two months—is that you’ve got to go after each and every case, and for that you need testing capacity and also availability so that communities can get access to a test, rather than having to drive for two hours to some airport.”

Professor Costello, an outspoken critic of the government’s “herd immunity” policy, posed the pointed question: “Are we re-focusing the whole of government on suppression, or are we managing the spread?”

While the Johnson government claimed to have ditched its herd immunity policy, Professor Costello commented, “It seems like [Health Secretary] Matt Hancock, [former Health Secretary] Jeremy Hunt and others are really pushing that [suppression rather than prevention] and I’m just not quite clear where the UK government sits between these two, so I think that’s something for discussion.”

Yesterday’s public challenge by scientists speaks to the depth of concern in the scientific community over the government’s response to COVID-19. The distortion and suppression of scientific truth by capitalist governments worldwide presents enormous dangers to public health and is generating growing opposition worldwide among scientists, doctors and throughout the working class.

Last night, the government was forced to release a list of more than 50 names of SAGE members. Two members declined to be named. Cummings was not listed as a member.