At an appearance in Phoenix, Arizona on Tuesday to promote the government’s back-to-work campaign, President Donald Trump confirmed reports that he is planning to dismantle the White House coronavirus task force. Trump traveled to Phoenix to tour a Honeywell aerospace plant that has partially converted to the production of N95 masks.

His first major event outside of Washington DC in a month, it was meant to signal that the period of quarantining is over and it is time to shift to reopening business. The White House indicated that more such appearances would soon follow, including one in Ohio later this week. 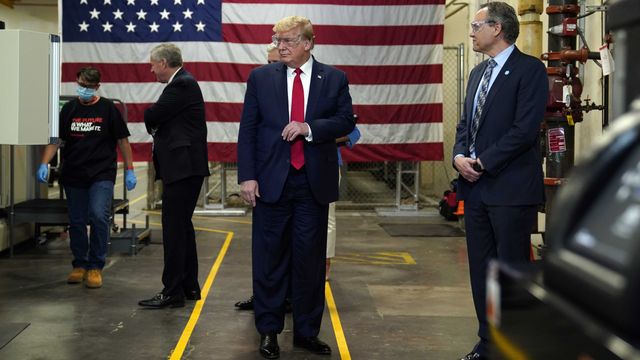 Trump combined his tour of the plant with a so-called “round table” with Navajo Indian officials, at which he displayed an executive order allocating $600 million for the Navajo Nation to combat the coronavirus. This is a drop in the bucket compared to the massive social needs of an impoverished and oppressed population that lacks the basic health infrastructure needed to deal with the pandemic. It is a tiny fraction of the more than $6 trillion that has been allocated on a bipartisan basis by Congress and the Federal Reserve to bail out Wall Street.

In a brief exchange with reporters following the round table, Trump was asked to respond to a report in the New York Times that he was planning to “wind down” the White House task force on the virus. He confirmed the report, saying the country had entered “phase two” of the pandemic, which he called “safety and opening.” He added, “We will have a different group probably set up for that.”

Trump’s appearance featured the combination of self-congratulation, stupidity and brazen lying to which millions around the world have become accustomed. Significantly, he made a point of calling the American people “warriors,” implying that they had to be prepared to die. And to die, moreover, for Wall Street.

His announcement on the task force underscored that the drive to force workers back into factories and workplaces, without any serious safety precautions or equipment, and while the pandemic continues to rage unchecked, puts an end to any pretense of a coordinated effort to contain the disease.

It makes clear that the drive to resume corporate-profit making, in defiance of warnings from public health experts as well as polls showing lopsided majorities opposed to the operation, is a conscious decision to let the deadly virus spread more widely and take untold thousands more lives.

In practical terms, the existence of the task force, which includes scientists and medical experts such as Dr. Anthony Fauci, exerted little influence on the response of the Trump administration and the political establishment as a whole to the pandemic. From the onset, the response of the government has been determined by the interests and demands of the corporate-financial oligarchy that runs the country.

But the winding down of the body has considerable symbolic significance. It is a statement that neither the facts, nor science, nor popular opinion, nor the horrific toll in death and disease will deter the ruling class from propping up the stock market and expanding the wealth of the super-rich, no matter the human cost.

Trump is using the technique of the “big lie” to justify his back-to-work campaign. He claims that the pandemic is all but over, even as deaths surge past the 70,000 mark and infections continue to increase. It is, moreover, well known that the official figures vastly underestimate the real levels of contagion and death.

Earlier on Tuesday, as he left the White House to fly to Phoenix, Trump dismissed as irrelevant a report to the Centers for Disease Control by Johns Hopkins University predicting that the infection rate in the US would explode to 200,000 a day and the death rate would nearly double to 3,000 by the end of May.

He said the report assumed the absence of mitigation measures, while the moves to “reopen” already underway or announced by at least 42 states included “lots of mitigation.” This is a lie.

Few if any of the states meet the guidelines for reopening that Trump himself announced last month, including 14 straight days of declining infections. Many are openly flaunting minimal social distancing precautions, opening barber shops, beauty salons, gyms, beaches, shopping malls, restaurants and even movie theaters.

Even the Institute for Health Metrics and Evaluation (IHME), which has consistently produced the lowest estimates of COVID-19 deaths of any scientific body, and which the White House has cited in the past, on Monday raised its projection for US deaths by August 1 from the already surpassed 60,000 to 135,000, based on what it called a “premature” lifting of social distancing measures.

In shutting down the task force, Trump is seeking to suppress any objective factual and scientific reporting. Despite efforts to accommodate himself to Trump, Fauci frequently felt obliged to contradict claims by the president of miracle cures and early vaccines, and he warned of the dangers of a premature reopening of the economy. As he seeks to intimidate and repress working class resistance to being forced to work under unsafe conditions, Trump will no doubt step up efforts to suppress statistical data on the actual impact of the disease.

Like everything else Trump does, the Phoenix event is closely linked to his electoral prospects in November. Arizona is considered a battleground state. He carried the state in 2016, but recent polls show a close race with the presumptive Democratic candidate Joe Biden.

Like a majority of states across the country, including states with Democratic governors, Arizona is loosening social distancing measures and beginning to allow non-essential businesses to reopen. The day before Trump’s visit, Republican Governor Doug Ducey announced he was accelerating his plan to reopen the state’s economy.

Also on Monday, Gavin Newsom, the Democratic governor of the California, the most populous state in the country, announced that he would begin to reopen this Friday. Echoing Trump, he said, “We are entering into the next phase this week, end of the week.” The “next phase” will include the reopening of beaches and “adjustments this week in the retail sector.”

Trump’s sociopathic gangsterism is not simply an individual question. He embodies the corporate-financial ruling elite in America. As in the rest of the world, this financial oligarchy is consciously exploiting the pandemic to implement policies of social plunder it had long been preparing to deal with a deepening economic crisis of the capitalist system. Despite tactical differences, the Democrats fully back this homicidal policy, which is directed above all against the working class.

The American oligarchy decides for death
[5 May 2020]

Remdesivir as “miracle drug”: Back-to-work propaganda vs. science
[1 May 2020]