A meat-processing plant in Melbourne has been temporarily closed as a result of Victoria’s largest coronavirus outbreak.

To date, 62 confirmed cases have been linked to the Cedar Meats facility in Brooklyn, a mostly industrial suburb in Melbourne’s west. This morning, Victorian officials announced an additional 13 cases, indicating that infections stemming from the cluster are continuing to spread.

Although a worker at the plant was diagnosed with COVID-19 on April 2, health authorities did not take any action to investigate the possible spread of the virus at the plant until more than three weeks later. 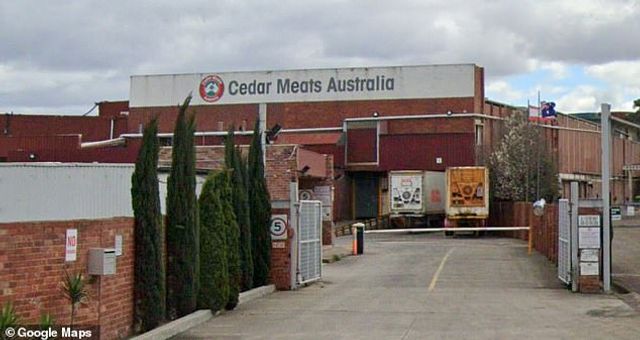 The Department of Health and Human Services (DHHS) told the Australian on Tuesday that the workplace had not been “considered an exposure site” because the worker “had not been at work while infectious.”

A second worker tested positive on April 24, but the DHHS did not deem the abattoir worthy of scrutiny until another case was discovered the following day.

The third worker was diagnosed when he developed symptoms after undergoing emergency surgery on a severed thumb at the nearby Sunshine Hospital. Two dozen hospital workers were sent home to self-isolate as a result of this exposure.

The company was notified of the positive test on April 27, but no decisive action was taken until two days later, following the discovery of additional COVID-19 cases. The initial cluster of employees all worked in close proximity in the plant’s boning room.

At least four workers had been diagnosed by the time Cedar Meats announced that the plant would be closed for two weeks, and that all 350 workers at the facility would be tested and self-isolated. The plant had a “reduced kill” on May 1 and some workers remained until May 3.

Some workers who have spoken to the media anonymously, have said that the first they heard of the COVID-19 outbreak was on May 1. In other words, they were forced to stay on the job after the company and state authorities knew of the dangers and were told nothing.

As the number of COVID-19 cases linked to the meatworks has steadily increased, Victorian health authorities and the state Labor government have released minimal details about the outbreak.

The name of the facility was officially suppressed by the authorities. This was a clear attempt by the Labor government to ensure that the health crisis did not impact on continued production at the plant.

Previously, schools and health facilities, sometimes with only one confirmed case, have been named immediately.

The company only “outed” itself as the centre of the cluster after media scrutiny and amid growing anger over the veil of secrecy.

The government decision to conceal the location of the outbreak increased the risk of wider community transmission as even the most thorough tracing would not have turned up everyone who was in close contact with the meatworkers. This includes delivery drivers or contractors who visited the site, as well as workers in the surrounding area.

Already, a staff member at the nearby Footscray Aged Care Home has tested positive for COVID-19. The worker is a close contact of one of the Cedar Meats workers.

The ongoing crisis at the Newmarch House aged care facility in western Sydney, where 16 residents have died of the coronavirus, demonstrates the potential consequences of the Victorian government’s failure to divulge the details of the Brooklyn outbreak.

The federal government has now launched an investigation into the possibility that the virus may have been spread to other facilities by Commonwealth meat inspectors who visited the Melbourne abattoir in April.

Reports in the Murdoch press have suggested that the state government’s silence is related to a $15,000 donation Cedar Meats made to the Labor Party in 2014.

The reality is, all levels of government in Australia are seeking to downplay the prevalence of the coronavirus. Their claims that the worst of the crisis is over, exposed as a fraud by the abattoir outbreak, are aimed at creating the conditions for workers to be herded back onto the job to ensure the resumed flow of corporate profits.

While Victoria has maintained a stricter lockdown than elsewhere in the country, the state government still plans to begin lifting restrictions and fully reopening schools as early as next Monday.

The Brooklyn outbreak has further exposed the role of the unions as central partners in this corporate offensive.

The Australasian Meat Industry Employees Union (AMIEU) did not issue a statement about the outbreak until May 6, days after it had publicly been revealed. It is not clear whether the union knew about the outbreak while it was being covered-up by state authorities, but its delay in making any public comment demonstrates that the AMIEU, no less than the Labor government, is seeking to downplay the dangers facing workers.

The statement said that while Cedar Meats had put preventative measures in place, the outbreak showed that they were “not sufficient.”

According to a worker at the plant who spoke to the Guardian, these measures amounted to little more than staggered lunch breaks, additional cleaning, and a security guard hired to check workers’ temperatures. In other words, they are merely window-dressing.

The AMIEU statement made no criticism of the Labor government’s handling of the outbreak and indicated the union’s intention to work with management to push for an imminent return to work at the Brooklyn plant.

The statement said: “The AMIEU is willing to work with Cedar Meats to reach agreement on the necessary controls, including physical distancing, appropriate barriers where practicable, work processes, personal protective equipment and vaccinations if and when they become available.”

The statement also downplayed concerns that Australian meat-processing plants would experience coronavirus outbreaks such as those seen overseas, stressing there were “significant differences between the processes in the USA and many workplaces in Australia.” It provided no evidence for these assertions.

In the United States, more than 4,900 meat workers have tested positive for COVID-19 and 20 have died. In Canada, 935 workers at the Cargill meatpacking plant in Alberta have contracted the virus and one has died. In Germany, nearly 300 slaughterhouse workers in Baden-Württemberg are among the country’s confirmed cases.

As in Australia, many meatworkers in North America and Europe are immigrants, often with limited or no access to health care.

In addition, low wages and the precarious nature of their employment put meatworkers under pressure to come to work sick, and to remain silent about poor health and safety standards in what is, at the best of times, a dangerous environment.

Many workers in the Australian meat industry, including at Cedar Meats, are casuals employed by third-party labour hire companies, meaning they do not get sick leave. A large number across the industry are migrant workers on temporary visas and are unable to access welfare payments if they are fired.

These circumstances are the result of decades of attacks on jobs, wages and conditions, enforced by Labor and the unions. These dire conditions are now being exploited by the unions, along with governments and companies, to force workers to stay on the job in unsafe conditions so that profit-making operations continue.

This is further proof that workers can only defend their basic social rights, including to a safe working environment, through a rebellion against the unions and the establishment of new organisations of struggle, including Action Committees at all plants and factories.

In addition to coordinating the broadest industrial fight, such committees will face major political issues, including the need to place the major corporations and essential industries under public ownership and democratic workers’ control. This is inseparable from the fight for a workers’ government that will reorganise production to meet social need, not private profit.