A blog post on the website of The Hamilton Project has revealed that hunger in the US has expanded to historically unprecedented proportions since the onset of the COVID-19 pandemic, especially among households with young children.

Reporting on evidence from two surveys, The Hamilton Project shows that by the end of April 2020, more than 20 percent of all US households and over 40 percent of mothers with children under the age of 13 were experiencing food insecurity. These figures are between two and five times greater than they were in 2018, when food insecurity data was last collected.

Households and children in the surveys are considered food insecure if a respondent “indicates the following statements were often or sometime true”:

Lauren Bauer, a fellow in Economic Studies at the Brookings Institution who specializes in social and safety net policies, wrote in her blog post on Wednesday, “Rates of food insecurity observed in April 2020 are also meaningfully higher than at any point for which there is comparable data” from 2001 to 2018. 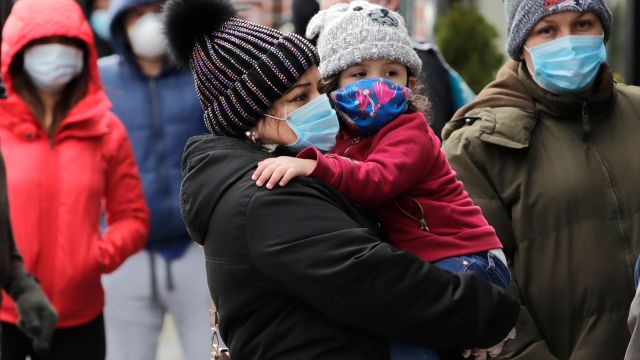 A woman clutches a child while waiting with hundreds of people line up for food donations, given to those impacted by the COVID-19 virus outbreak, in Chelsea, Mass., Tuesday, April 28, 2020. (AP Photo/Charles Krupa)

Further placing the present ability of families to put food on the table in historical context, Bauer writes, “Looking over time, particularly to the relatively small increase in child food insecurity during the Great Recession, it is clear that young children are experiencing food insecurity to an extent unprecedented in modern times.”

Bauer explains that the surveys conducted their own national sampling of mothers in late April by asking the same questions used by the US Department of Agriculture (USDA) in previous food insecurity studies.

Significantly, Bauer also explains that the USDA aggregates a battery of questions on access to food from the Current Population Survey in 2018. If the nearly two-to-one ratio between the percent of mothers with children under the age of 12 who had food insecure children in their household and the percent of families with children who were not eating enough because they couldn’t afford enough food were maintained today, the “17.4 percent [of] children not eating enough would translate into more than a third of children experiencing food insecurity.”

The Hamilton Project (THP) is a Democratic Party economic policy think-tank associated with the Brookings Institution. Launched in 2006, the THP featured then-Senator Barack Obama as a speaker at its founding event, who called the organization “the sort of breath of fresh air that I think this town needs.”

The publication of the US hunger data is part of an initiative by THP to push for increases in government spending on national food programs such as the Supplemental Nutrition Assistance Program (SNAP), formerly known as food stamps.

However, the Democratic Party proposal to increase food stamp benefits by 15 percent is being considered as a temporary measure “for the duration of the economic crisis,” according to the New York Times. In any case, the increase is still insufficient to provide the poor what they need to adequately feed their families, with the average monthly benefit of $239 going up by $36 to $274 under the Democrats’ proposal.

Meanwhile, with tens of millions who have lost their jobs during the pandemic unable to collect unemployment benefits due to delays and backlogs in government systems that are ill-equipped to handle the increase in applications, the same kind of bureaucratic mismanagement is certainly to be expected in the present wave of SNAP assistance applications.

Along with every social program over the past four decades, federal food stamp assistance has been attacked by Democratic and Republican administrations alike as “welfare” that is undeserved by those receiving it. Before the pandemic, President Trump boasted that he forced 7 million people off of food stamps since taking office and the Congressional Republicans were working on a plan to further reduce eligibility and expand work requirements to qualify for the benefit.

The return of mass hunger in America is an inevitable product of the response of the US government and ruling establishment to the pandemic, which has been a mixture of utter indifference to the suffering caused by the health crisis and outright cruelty toward the working class, poor and elderly who have been attacked by COVID-19 infection and death as well as the deprivation associated with the economic crisis.

Clearly, the staggering magnitude of the impact of the pandemic on families has been revealed by the findings of The Hamilton Project food insecurity study. As dire circumstances confronting millions of people persist and deepen, the crisis is pointing directly to social convulsions that have not been seen in the US since the Great Depression of the 1930s.