Why are thermal imaging cameras being deployed in US workplaces?

As state governments across the country are lifting restriction and restarting economic activity—despite warnings from public health officials that relaxing social distancing will result in a spike in COVID-19 cases and deaths—employers are moving forward aggressively with plans to resume production and business operations.

Well aware that government policy is being shifted to protect corporate interests, employers are moving rapidly to implement workplace procedures and technologies that would have been very difficult, if not impossible, to put into place prior to the coronavirus crisis. 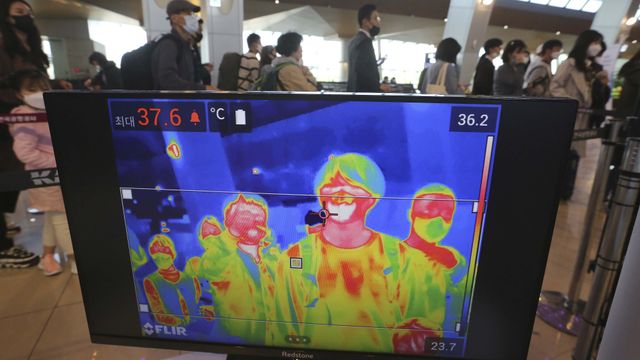 The recent utilization of the Defense Production Act by the Trump administration, classifying meatpacking plants as essential infrastructure and forcing workers back to work in these dangerous facilities, demonstrates that the fundamental rights of the working class are under unprecedented attack.

Despite viral outbreaks among thousands of meatpacking workers—including at least 17 deaths—the US government is protecting the corporations from any liability for the sickness or death of workers. Meanwhile, states such Iowa are denying unemployment benefits to meatpacking workers who refuse to return to work because of the threat to their health.

For workplaces that have remained open throughout the pandemic—such as hospitals, major grocery stores and transportation systems—employers have been scanning workers with forehead thermometers as they arrive on the job to see if they have an elevated body temperature.

In the case of the Metropolitan Transportation Authority in New York City, a team of medically trained employees—the so-called Temperature Brigade—are scanning the temperatures of 3,500 employees at 70 roving locations around the city each day. Transit workers with a temperature of 100.4 degrees or more are being sent home and told to see a doctor before they can return to work.

Since the use of handheld thermometers is time consuming and labor intensive, some of the largest US corporations have begun implementing automated thermal imaging systems in workplaces. For example, the Associated Press reported on April 18 that Amazon had begun using thermal cameras at its warehouses to accelerate the screening of workers as they enter the facilities.

The AP report notes, “Amazon set up the hardware for the thermal cameras in at least six warehouses outside Los Angeles and Seattle, where the company is based, according to employees and posts on social media.

“Thermal cameras will also replace thermometers at worker entrances to many of Amazon’s Whole Foods stores, according to a recent staff note seen by Reuters and previously reported by Business Insider.

“The company performs a second, forehead thermometer check on anyone flagged by the cameras to determine an exact temperature, one of the workers said. An international standard requires the extra check, though one camera system maker said the infrared (IR) scan is more accurate than a thermometer.”

According to another report, Amazon has spent $10 million on the thermal cameras to use in its warehouses to scan employees and in its store to scan customers.

The AP also reports that other firms such as Tyson Foods, Inc. are exploring the use of the systems which can cost between $5,000 and $20,000 per unit. In the case of Tyson, the company has installed walk-through IR scanners—similar to metal detectors—that allow for a mass temperature reading that is extremely accurate. CNBC also reported that Ford Motor Company had purchased the walkthrough devices.

Meanwhile, employees who have not been working due to the shutdown of their workplaces during state of emergency declarations have made it clear that they support continued isolation at home until the danger of the pandemic has passed. As one public poll after another across the US has shown, the working class is opposed—in some cases by more than 80 percent—to returning to work under conditions where they may become ill or die from COVID-19, even if it means further economic hardship.

Based on the well-known fact that individuals with coronavirus infection often show no symptoms and can spread the contagion to those around them—according to one study, 50 percent of those with COVID-19 have no symptoms—it is clear that scanning employees for a fever is not going to stop the virus from entering workplaces.

While thermal imaging and other technologies, including smartphones apps for contact tracing, can play a role in a public health response, left in the hands of capitalist governments they can also be used to expand state surveillance and suppress opposition to the rush back to work and squandering of trillions to prop up the stock markets while millions face joblessness and destitution.

Thermal imaging cameras translate heat or thermal energy into visible light. Since living things and mechanical, electrical and digital equipment all put out heat, they can be “seen” with thermal devices, even in the dark. Thermal devices are able to detect small differences in heat radiation from objects and convert the different values of heat into colors on a digital display. The amount of heat emitted by an object is called its “heat signature” and the variation of heat measurements within an object constitutes its “heat map.”

Thermal imaging devices have differing levels of sensitivity to variations in temperature. Some devices are able to detect temperature differences of 1/100 of a degree. Thermal cameras have limitations in that they cannot see through windows because of the reflective properties of glass. While they cannot “see” through walls, thermal cameras can detect objects inside of a wall causing the surface temperature of the wall to go up or down in a particular location.

Thermal and IR devices use similar technology. Thermal cameras are passive—meaning they do not project any light—and measure long wavelengths of infrared radiation being emitted by objects. Dust, smoke and other sources of light do not interfere with the infrared energy being measured by thermal devices.

IR devices, on the other hand, project short infrared wavelengths onto the objects being measured and capture the light that is reflected back to the reader.

In recent decades, with the cost of equipment coming down dramatically along with the development of microprocessors, the Internet and wireless technologies, thermal devices are used at every level of police and military operations. The Department of Homeland Security has deployed the devices at US border crossings.

In the shadow of the coronavirus pandemic, the global market for thermal scanning devices is growing rapidly. FLIR Systems, a leading manufacturer of thermal cameras for military, commercial and consumer uses, has seen as rapid increase in its stock value in recent weeks after it was reported that Amazon was buying equipment from the firm. A market study by ReportLinker.com says that the thermal scanner market is expected to grow to $6.7 billion by 2025.

When companies manufacturing and selling surveillance equipment began promoting the use of thermal cameras for the purpose of combating the coronavirus, organizations such as the Electronic Frontier Foundation (EFF) raised concerns about the threat posed to basic rights.

On April 7, EFF wrote, “Thermal cameras are still surveillance cameras. Spending money to acquire and install infrastructure like so-called ‘fever detection’ cameras increases the likelihood that the hardware will long outlive its usefulness during this public health crisis. Surveillance cameras in public places can chill free expression, movement, and association; aid in the targeted harassment and over-policing of vulnerable populations; and open the door to face recognition at a time when cities and states are attempting to ban it.”

It is significant that the thermal imaging devices are first being implemented at workplaces where workers have walked off the job in protest over unsafe working conditions connected with the expanding coronavirus. Autoworkers and workers at both Amazon warehouses and Tyson meatpacking plants have engaged in strike action to demand protections from COVID-19 in their workplaces.

There is a powerful political and class logic behind the rush to place thermal imaging devices in workplaces across the US and around the world. In the same way that the ruling elite is utilizing the coronavirus pandemic as a means of enriching itself with trillions of dollars in government stimulus money and intensifying exploitation through mass layoffs, if not stopped by the working class it will also use the crisis to expand the structure of state repression.