By Christopher Davion and Kevin Reed
9 May 2020

Protests against police violence have broken out in Indianapolis and Brunswick, Georgia on Thursday and Friday. Social tensions have been mounting during the pandemic and the incidents of state brutality which were commonplace before the coronavirus crisis continue.

Demonstrators took to the streets in Indianapolis on Thursday to protest the police killings of the previous night. Officers shot and killed two men and another officer fatally struck a 23-year-old pregnant pedestrian with his vehicle in three separate incidents that occurred just hours apart beginning Wednesday evening. 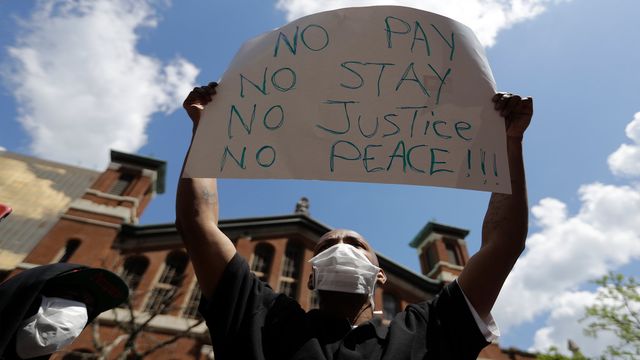 A 21-year-old African American man, Dreasjon “Sean” Reed, was killed by police after a lengthy vehicle and foot pursuit that was broadcast from his phone live to thousands of viewers on Facebook.

The official statement by the Indianapolis Metropolitan Police Department (IMPD) said police began a pursuit of Reed’s vehicle after allegedly witnessing him driving over the speed limit. Police also claim that no dashboard or bodycam footage of their pursuit and killing of Reed existed.

The video of Reed’s Facebook livestream, uploaded to YouTube by WISH-TV, begins with a visibly distressed Reed pleading with those viewing the livestream to “bail me out” and repeatedly saying that he did not want to experience imprisonment again. He went on to also apologize to his family members, some of whom were watching his stream live, for his current predicament.

Fourteen minutes into the video, Reed exclaimed to those viewing that he would exit his vehicle and begged repeatedly for help. Once parked, Reed shared the address of his location and again pleaded with those watching his pursuit to help him.

Shortly after exiting the vehicle, Reed is seen running and being pursued on foot by an officer. After verbally refusing to stop running, Reed is then seen screaming in agony, dropping his phone, and then a hail of gunfire is heard.

IMPD police chief Randall Taylor claimed in a press conference that a total of 15 bullet shell casings were recovered from the scene, claiming two of which came from a gun fired by Reed. This is contradicted by the video livestream footage of Reed screaming and falling to the ground before being fatally shot and never displaying a firearm in the footage.

For approximately 15 minutes, following Reed’s killing, the Facebook livestream continued and captured audio of a police detective off-camera mocking and joking about the young man’s death. The detective remarks, “Think it’s going to be a closed casket, homie,” speaking to the body of Reed, while another detective laughs in response.

The second shooting in Indianapolis took place eight hours later during a police investigation into a burglary at an apartment complex. The police shot McHale Rose, 19, whom they said was armed with a rifle and shot at four officers as they approached the apartment at about 1:30 a.m. The police report also said the initial investigation indicates that Rose likely made the original 911 call “with the intention of initiating an ambush-style attack on the officers when they arrived.”

In the case of the pregnant woman who was struck and killed, Officer Jonathon Henderson, a 22-year police veteran, hit Ashlynn Lisby, who was a white woman, with his vehicle as she walked along an expressway ramp early in the morning. Police reports said Henderson, who was on his way to work, requested assistance as he administered first aid to the woman. Lisby was pronounced dead at a local hospital and her fetus did not survive.

On Friday, hundreds of protesters rallied in Brunswick, Georgia, the town where Ahmaud Arbery was shot and killed in broad daylight by a former police officer and his son while he was jogging through the Satilla Shores neighborhood on Sunday, February 23. Friday would have been Arbery’s 26th birthday.

The rally took place at the Glynn County Courthouse the day after the arrest of Gregory (64) and Travis (34) McMichael on murder and aggravated assault charges on Thursday afternoon. The two men, who are white, were arrested by the Georgia Bureau of Investigation, which was brought in to investigate the shooting of Arbery, who is black, by Georgia Governor Brian Kemp and State District Attorney Chris Carr.

As reported on the World Socialist Web Site, a dashcam video shows that Arbery—who was athletic and jogged regularly—was targeted and chased down by the two men as he jogged through the rural neighborhood alone. Arbery was shot at least three times by Travis Gregory with a shotgun, while the elder McMichael stood in the bed of his pickup truck with his handgun drawn, and was pronounced dead at the scene 40 minutes later.

It took two and a half months and a groundswell of popular outrage before government authorities in Georgia lifted a finger. Only after the graphic dashcam video of the murder was released—which the police had in their possession shortly after the shooting and was recorded by William “Roddie” Bryan, a third individual who is also now under investigation—was anything done by state officials to intervene and carry through the indictments.

Demonstrators on Friday called for the resignation of the district attorneys who had refused to bring charges against the McMichaels and, thereby, sanctioned the murder of Arbery. One of the two Brunswick DAs, Jackie Johnson, has recused herself because Gregory McMichael was a former investigator in her office, along with being a former officer with the Glynn County Police Department.

Glynn County Commissioner Peter Murphy told reporters at a press conference on Friday morning that Johnson had stopped investigators from arresting McMichael and his son. A second DA from Waycross, Georgia, George E. Barnhill, also recused himself from the investigation on April 2 in a letter to Captain Tom Jump, of the Glynn County Police Department.

In his letter, Barnhill wrote that the two men were in “hot pursuit” of a burglary suspect “with solid firsthand probable cause, in their neighborhood” and it “appears their intent was to stop and hold this criminal suspect until law enforcement arrived. Under Georgia Law this is perfectly legal.” Barnhill, furthermore, wrote that “it clearly appears” that the McMichaels had “firearms being carried in an open fashion.”

Commissioner Murphy was joined at the press conference by state politicians from Atlanta, both Democrats and Republicans, who came together in an effort to contain the growing public outrage over both the murder of Arbery and the blatant attempt by criminal justice officials to justify it. The speakers all attempted to frame the events in Brunswick as a series of errors and a “botched” investigation, not the normal course of affairs that is repeated in cities and towns across the US every day.

The rally was organized by the NAACP and focused on the demand for the resignation of the district attorneys who protected the two gunmen for more than ten weeks while family members and supporters demanded justice. The tensions in Brunswick are such that Al Sharpton was scheduled to host a virtual Facebook Live event on Friday evening to bring his particular variety of race-based Democratic Party politics into the crisis.

In other examples of police violence against the public in recent days, multiple mobile phone videos have been shared on social media platforms showing New York City police officers brutalizing and punching people in the face for not wearing face coverings. As people gathered to record the incidents of outright brutality on their mobile devices, groups of officers are seen making physically aggressive movements toward the bystanders and verbally threatening them with similar treatment for also not wearing masks.

In one instance, a widely shared video shows three officers restraining and arresting 21-year-old Stephon Scott at around 10:10 pm on May 3. One of the officers strikes Scott in the head as he lies prone on the ground. The officer then takes out his baton and threatens to arrest another man for failing to wear a mask, despite the fact that his own face is not fully covered, and one of his fellow officers is not wearing any mask at all.

In Birmingham, Alabama on Tuesday, a woman was body-slammed at a Walmart by an off-duty police officer after refusing to wear a face mask. The officer, who has so far not been identified, physically assaulted the woman after she was asked by a store employee to put on a face mask before entering the Walmart.

The officer was defended by Sergeant Rod Mauldin of the Birmingham Police Department, who claimed that the woman refused to abide by the requests and began yelling expletives at customers and employees. Mauldin said the officer used a “takedown measure” to detain the woman because of “other threat factors in the store.”

In the video of the incident, the officer is seen blocking the woman as she appears to be trying to head back out of the store. He then suddenly grabs her between the legs, picks her up and slams her head and upper body to the floor.