Workers at General Motors in Mexico have been ordered to prepare to return to work on May 18, the same day as in the US and Canada. As the pandemic continues to spread out of control across the three countries, with Mexican hospitals overwhelmed and recording an accelerated increase in deaths, the premature reopening constitutes a death sentence for many at the plants, their families and communities.

Workers at the Silao Complex, one of GM’s four plants in Mexico, are appealing urgently to organize an international struggle to keep the plants closed. A rank-and-file group called Generating Movement released a statement on Saturday titled, “An international call for solidarity and action in support for the workers’ struggle at General Motors.” The statement is directed to government authorities, workers organizations and rights groups, and the media.

During the US national strike by GM workers last year, the Generating Movement group, which was organized by workers to oppose the pro-company union affiliated with the gangster-ridden Confederation of Mexican Workers (CTM), voted to oppose management’s demands for speedup and forced overtime to undermine the effects of the US strike. After firing about a dozen outspoken workers at Silao, GM was compelled to shut down the plant during the strike to contain the rebellion. 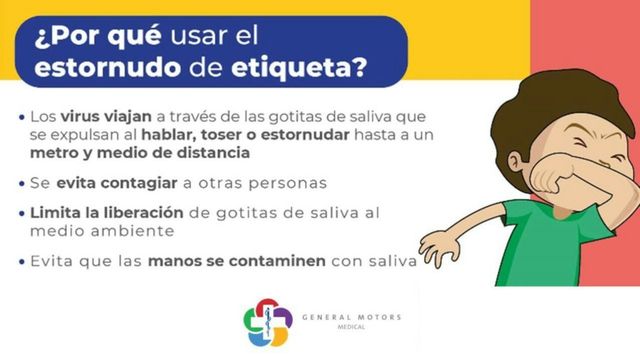 The document warns of “the crime that the owners and managers of General Motors are about to commit by forcing our co-workers to return to work on May 18, during the peak of the coronavirus pandemic and May 30 for those co-workers that are most vulnerable.” It rejects the safety measures as ineffective, adding, “they do little more than take us to the slaughterhouse, as it has occurred at other maquiladora plants in northern Mexico, like Tijuana, Mexicali, Ciudad Juárez and others.”

In Tijuana, where 68 percent of manufacturing plants remained open at the end of April, the number of official COVID-19 deaths is twice as high as any other municipality in the country, with 255 fatalities as of this writing. The outbreak overwhelmed hospitals, with doctors denouncing to the media that many infected are arriving dead or dying at home, which means that the real death toll is much higher.

At two plants operated by Michigan-based auto supplier Lear in Ciudad Juárez, across the Rio Grande from El Paso, Texas, as many as 20 workers have died. Lear employs 20,000 workers in Ciudad Juárez where there have been 112 deaths and 474 confirmed cases.

The list of demands by the Silao workers includes: no re-opening until it is “totally free of danger,” the full payment of salaries, an end to ongoing mass firings at the plant, and the re-installation of the victimized workers fired last year. They have also called for free elections to oust the CTM-based union, an end to repressive measures, an hour-long break for lunch and full food allowances to incapacitated workers.

“We demand that life is prioritized for all of us as employees, workers with full labor rights and as citizens with non-negotiable human rights,” the document concludes. 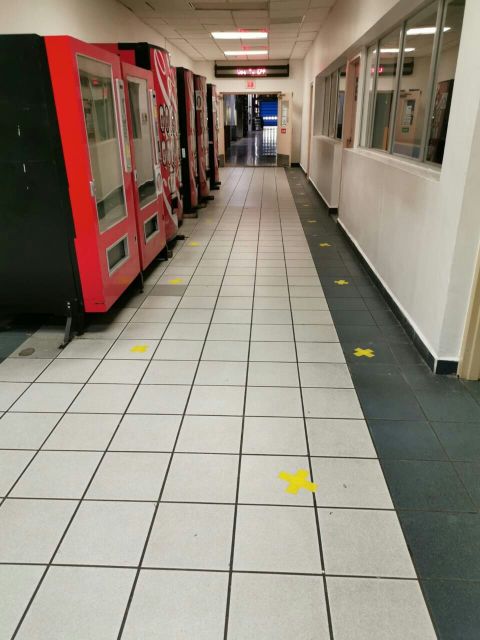 The call is an important development toward organizing an international resistance of the working class against the premature return to work being imposed worldwide. It must be stressed, however, that rank-and-file workers must continue to take their own independent initiative and appeal for common actions among the broadest sections of the working class throughout Mexico and the US and Canada. While they must demand that the corporations and the government take immediate measures to protect their health and safety it would be fatal to rely on the government of President Andrés Manuel López Obrador (AMLO) and his Morena Party. Nor should they look to any section of the trade unions, including those aligned with Morena and the American AFL-CIO unions.

All of these institutions are beholden to the giant transnational corporations and the capitalist system, which subordinates every aspect of life, including life itself, to the relentless drive for profit and competition between rival groups of nationally based capitalists for the domination of markets.

Rank-and-file safety committees need to be organized independently of the trade unions to ensure that the lives and health of workers and their families take precedence over profit and that this struggle is coordinated across borders to fight transnational corporations, which are backed by the agencies of US imperialism. This fight must be guided by an international socialist perspective, which includes the transformation of the corporations and banks into public enterprises controlled by workers and used to meet human need, not private profit.

GM is particularly anxious to restart operations in Silao where workers build its top-selling and highly profitable Silverado and Sierra pickup trucks. With sales plummeting and GM selling $4 billion in bonds to meet expenses, the company and its Wall Street investors want to ramp up production in hopes that the government will subsidize new vehicle sales, if not organize another corporate bailout.

On Friday, GM officials told Reuters, “There is no confirmed date yet and we will not start until the Economy Ministry confirms the date when we can return to work.” 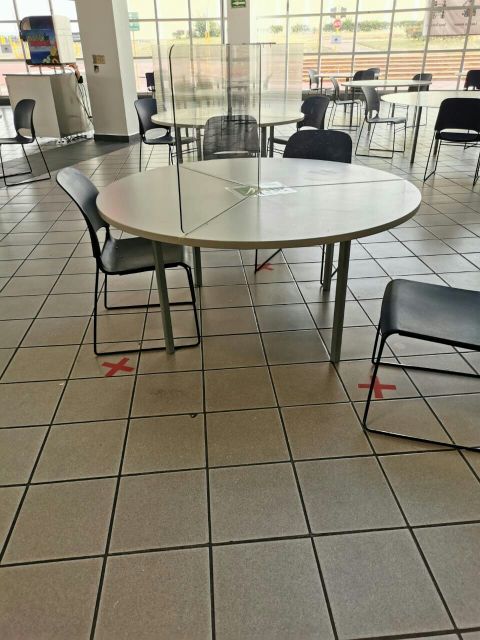 Cafeteria at the Silao GM complex

An assembly worker, however, shared with the WSWS a text message sent by a supervisor, which says, “Let me transmit the information available so far, the re-opening was moved ahead to May 18.” This was accompanied by several images by “General Motors Medical” on how to sneeze properly, not to touch their faces, wear masks and keep social distancing, while pictures were distributed of markings on the floor in the lines at the cafeteria and when entering the plant.

According to Reuters, the government is asking automakers to fill out a “self-assessment” to decide whether the plants can reopen “safely.” Besides omitting any input by those most affected by the reopening, the government is effectively giving the final say to corporations like GM that have long sacrificed lives for profit, even covering up safety defects in cars that led to several deaths.

Days after pressures began from Washington to re-open suppliers to US plants, the AMLO government declared it was preparing a gradual re-opening from May 16 or May 18. The official announcement is expected today. As shown by its orders sent to workers, GM management is confident that it will be able to open officially or through some loophole.

AMLO’s decree on March 30 ordered all nonessential activities to close with the full payment of salaries until May 30. With no serious enforcement of these measures, hundreds of manufacturing plants remained open across the country, although General Motors closed its Mexican plants on March 23. Along with the other US-based automakers, it was compelled to close earlier fearing that the wave of wildcat strikes across Europe and the US would spread to Mexico and find an internationally united expression.

On March 21, the World Socialist Web Site published an earlier appeal by Silao workers to co-workers in the US and Canada for a joint struggle to close the plants in Mexico and protect lives against the pandemic.

However, the AMLO government has made clear it will allow companies to impose their will. GM has already used a loophole deliberately provided by AMLO, and sanctioned by the unions, not to pay full salaries during the shutdown.

“The CTM trade union doesn’t support workers, informing us since the shutdown began that they would only pay 55 percent of the salary,” explained a GM worker at Silao to the WSWS. “We needed full pay so we would not be economically pressured to return to work, which is a risk for us all.”

Another worker added, “The union never intervenes on our behalf but it keeps charging union dues. In fact, the 55 percent is not real, much less arrives. Now and always, we are victims of labor exploitation. It’s really urgent [to fight], but people in Mexico are economically strangled to face the consequences of a rebellion to demand what is right. Even more for those who are subject to deductions and their paycheck comes practically at zero. That is why the company offers vacation time so that they receive some cash.”

Asked about how workers should respond across North America, the first worker said: “Through a strike protest to demand no reopening until it’s safe and the virus has been eradicated.”

GM stocks have jumped 15 percent since May 1, largely after their announcement of the reopening of plants across the US and Canada on May 18. GM also recorded a $294 million profit during the first quarter of 2020 despite the pandemic.

This follows a report in late March that GM had built up about $32 billion in cash. “We are aggressively pursuing austerity measures to preserve cash,” boasted CEO Mary Barra in a brief at the time in an indication of the job and wage cuts to come.

Such cash could provide $195,122 to GM’s 164,000 employees worldwide to more than weather the pandemic. The $21.63 million handed to Barra last year as compensation would alone cover the full average salary for all 6,000 workers at the Silao Complex for an entire year.

However, GM is not hoarding cash to safeguard its workforce but the profits of the handful of top investors, waiting for the right time to boost its stock prices through handouts like buybacks and dividends.

This is only partly why stocks have risen, however. Investors clearly expect that the pandemic crisis and related economic desperation will be used to intensify its ongoing cost-cutting restructuring. In Mexico, this has included layoffs of higher-seniority and injured workers, speed-ups and forced extra time. Last month, GM began a program of mass layoffs and wage cuts as high as 25 percent in Brazil, in collusion with the unions.

“That is money we deserve since we have given our lives on the assembly lines, with excessive work-days, for those profits,” commented a Silao worker.