According to the most recent government figures, almost 3 million workers applied for unemployment benefits last week in the United States, bringing the total number of jobless claims to roughly 36 million in the two months since the coronavirus forced businesses to shutter their doors. In addition, 842,000 people applied for aid through a separate federal program designated for self-employed and gig economy workers.

The report, issued by the US Department of Labor, indicates the premature reopening of the economy has done little to get Americans back to work, as its proponents have claimed. In fact, the number of unemployment claims last week is four times the record high recorded before March this year.

In Georgia, one of the first states to begin reopening parts of its economy, the number of unemployment claims reached 241,000. Florida, which allowed restaurants to open at one-quarter capacity, saw its claims rise to nearly 220,000 last week. Florida’s unemployment agency is struggling to process the claims, meaning the actual number of unemployed is higher. 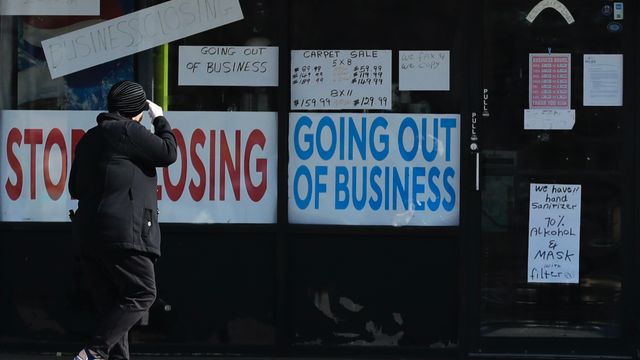 Some states that have lifted restrictions, such as Texas and South Carolina, have experienced a decline in claims, prompting Donald Trump to tweet “America is getting its life back.”

Despite Trump’s proclamation, many Americans are still facing hardship. The official unemployment rate for April soared to 14.7 percent from 4.4 percent in March as 20.5 million jobs were eliminated. In one month, the total number of jobs created in the last decade were wiped out.

According to projections by Goldman Sachs strategists, US economic activity as measured by gross domestic product (GDP) will contract by a staggering 39 percent in the second quarter, a revision of a previous prediction of 34 percent. Jan Hatzius and other economists predict that a 29 percent growth rate is expected in the third quarter, but growth will fall by 6.5 percent for the full fiscal year.

Goldman Sachs also predicts official unemployment will continue to rise. Previously, economists expected the unemployment rate to reach a high of 15 percent. However, new projections suggest a peak as high as 25 percent.

On Wednesday, Federal Reserve Chairman Jerome Powell reported that 40 percent of US households bringing in less than $40,000 a year lost a wage earner in March. This reveals the impact that the economic catastrophe wrought by the coronavirus has had on the poorest sections of the working class.

A report released by the Fed Thursday found that six percent of all adults either had their hours reduced or were forced to take unpaid leave. Altogether, 19 percent of adults reported either losing a job or experiencing a reduction in work hours in March.

“This reversal of economic fortune has caused a level of pain that is hard to capture in words, as lives are upended amid great uncertainty about the future,” Powell said at a virtual event hosted by the Peterson Institute of International Economics in Washington.

“The scope and speed of this downturn are without modern precedent, significantly worse than any recession since World War II,” Powell said. “We are seeing a severe decline in economic activity and in employment, and already the job gains of the past decade have been erased.”

Jobless workers in some states are still reporting difficulty applying for or receiving benefits amid the crisis. These include free-lance, gig and self-employed workers, who became newly eligible for jobless aid this year.

The federal stimulus payments from the CARES Act have still not been fully doled out to workers in dire economic straits. As of this week, the IRS has issued 130 million payments worth a total of $200 billion. This still leaves approximately 20 million Americans who are still awaiting financial assistance.

The levels of economic crisis currently experienced by tens of millions have not been seen since the Great Depression of the 1930s. According to Feeding America, up to 18 million children in America could become food insecure as a consequence of the coronavirus pandemic. All across the US, families wait in long lines at food banks to receive what little aid they can.

A massive crowd in lines hundreds of cars long turned out Thursday for food assistance from the North Texas Food Bank in Dallas, Texas. The organization told NBCDFW it has helped more than 32,000 families since the onset of the pandemic. The food bank has seen an influx of households who have not requested aid before, with one spokeswoman estimating up to half of those seeking aid now are doing so for the first time. The same scene is unfolding in cities large and small all across the United States.

The coronavirus pandemic has unveiled the bankruptcy of the capitalist system. Faced with an immense public health crisis, the American ruling class has shown it is utterly incapable of implementing elementary measures to protect the population from illness, hunger or economic devastation. Instead, the lives of the working class and their families are subordinated to the will of a tiny parasitic layer that elevates the pursuit of profit over human life.